Ukraine through the Lens of Cuba, Part 2
by Greg Curtis 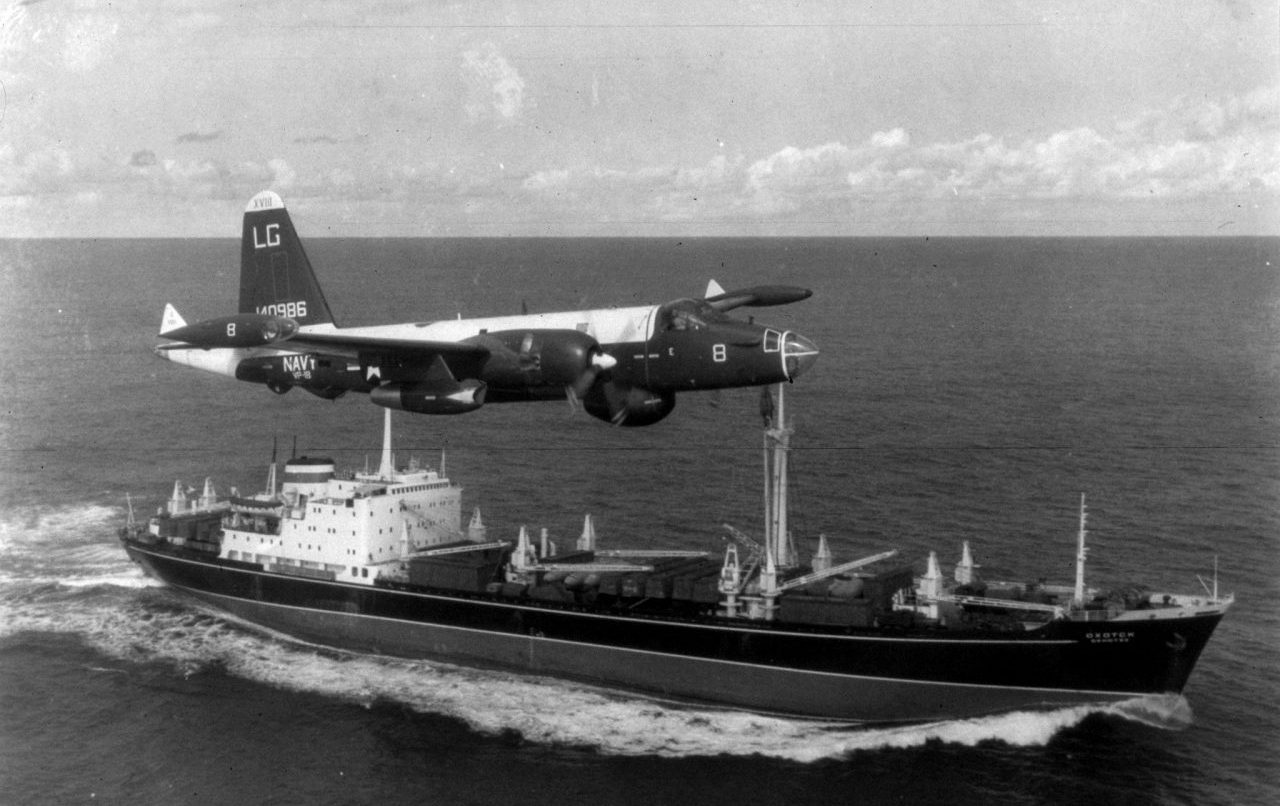 A U.S. Navy Lockheed SP-2H Neptune (BuNo 140986) of patrol squadron VP-18 Flying Phantoms flying over a Soviet freighter. The freighter is most probably the Okhotsk, which left the port at Nuevita carrying 12 IL-28 airplanes on 5 December 1962. Credit: US Navy, Source:Wikicommons


Previously in this series: Ukraine through the Lens of Cuba, Pt I

Last week we looked at the events that led up to the crisis. This week we’ll walk through the crisis in detail, occasionally noting similarities and differences between Khrushchev and Putin and between the USSR and Russia.

Although the US had suspected the Soviets of building missile systems in Cuba as early as August, it wasn’t until photographic confirmation was obtained via a U-2 flight that the crisis took shape. On October 15 the CIA reviewed the photos and confirmed that they showed medium range ballistic missiles capable of carrying nuclear warheads – “medium” range, but long enough to reach New York and Washington, DC.

From the beginning of the missile buildup, the Soviets had lied about their plans – lying to the Americans, the Cubans, the Soviet people and even the Soviet military. (Soldiers being sent to Cuba to help with the buildout were outfitted with fleece-lined cold-weather parkas, ski boots and other winter equipment.) This is eerily similar to the lies Putin told the West, his own people, and his own military ahead of the invasion of Ukraine.

President Kennedy was briefed the next morning (October 16) and that evening he convened what would come to be known as EXCOMM – the Executive Committee of the National Security Council. The group consisted of the nine members of the NSC plus five other key advisors selected by JFK.

Throughout the crisis, EXCOMM would be the key player on the American side, negotiating with Khrushchev and the Soviet Politburo.

EXCOMM quickly outlined the obvious possible American responses: do nothing, rely on diplomacy, invade Cuba in force, blockade the island. The Joint Chiefs strongly recommended a full-scale invasion of Cuba, but Kennedy was skeptical. Even if the invasion succeeded and even if no nuclear weapons were deployed, the USSR would have to react in some way, probably by seizing Berlin.

EXCOMM was to some extent backed into a corner because President Kennedy had told the American people in September that the US would not allow Cuba to be in a position to attack the US, but would act. The options of doing nothing or relying on uncertain diplomatic efforts therefore fell off the table.

Kennedy met with Soviet Foreign Minister Andrei Gromyko, who claimed any Soviet weapons on Cuba were purely for defensive purposes and posed no threat to the US. Kennedy didn’t let on that he knew this was a lie.

Ongoing U-2 flights now confirmed the existence of four fully operational ballistic missile sites. Final, executable plans were now drawn up for a full-scale invasion of Cuba by the US Army, Navy, Marines, and Air Force. However, a blockade of the island was also on the table, and as the day wore on opinion at EXCOMM began to lean toward a blockade.

Kennedy and EXCOMM met virtually all day, trying to come to a consensus on a plan. EXCOMM now favored a naval blockade of Cuba as a first step, but that option presented a problem: under international law a blockade was an act of war.

EXCOMM decided to reduce the threat level of the blockade in two ways. First, the US would justify the action under the Treaty of Rio, under which the US undertook the defense of the Western Hemisphere. Activating the treaty required a two-thirds vote of the Organization of American States, which was obtained.

Second, the blockade would be described as a “quarantine.” This was partly semantics, but not entirely. A “blockade” would mean that nothing could enter or leave Cuba, while a “quarantine” would mean only that offensive weapons couldn’t enter. Still, there was a serious risk that Cuba and the Soviets would consider the quarantine as an act of war and respond accordingly.

At 7:00 p.m. Eastern time President Kennedy went on national television to inform a shocked American people about the missiles in Cuba and the American response – the “quarantine.”

The President didn’t sugarcoat what was stake: “It shall be the policy of this nation to regard any nuclear missile launched from Cuba against any nation in the Western Hemisphere as an attack by the Soviet Union on the United States, requiring a full retaliatory response upon the Soviet Union.”

During Kennedy’s speech all US military forces were placed on DEFCON 3 – the Air Force was ready to attack on fifteen minutes notice.

For the first time, the Soviet Union responded publicly to the American actions. The Soviet TASS news agency released a telegram from Khrushchev to Kennedy warning that the “quarantine” would lead to war.

Later that evening Khrushchev sent a private telegram to Kennedy stating that the USSR could not ignore the American actions and that the quarantine (or “blockade,” as Khrushchev called it) was “an act of aggression” and that Soviet ships would ignore it.

On October 25 the UN Security Council met in emergency session at the request of the US. The American Ambassador to the UN, Adlai Stevenson, displayed enlarged photos of the missiles in Cuba, demonstrating beyond any doubt what was going on. Stevenson challenged the Soviet Ambassador, Valerian Zorin, to deny the existence of the missiles. In front of the entire Security Council, Zorin declined to speak.

The world was now at nuclear loggerheads. The Americans would not accept the Cuban missiles and would make “a full retaliatory response” if they weren’t removed. The Soviets considered the American quarantine to be an act of war. The US was on DEFCON 3. But matters were about to get a lot worse.