Panic Is a Virus, Part VI
by Greg Curtis 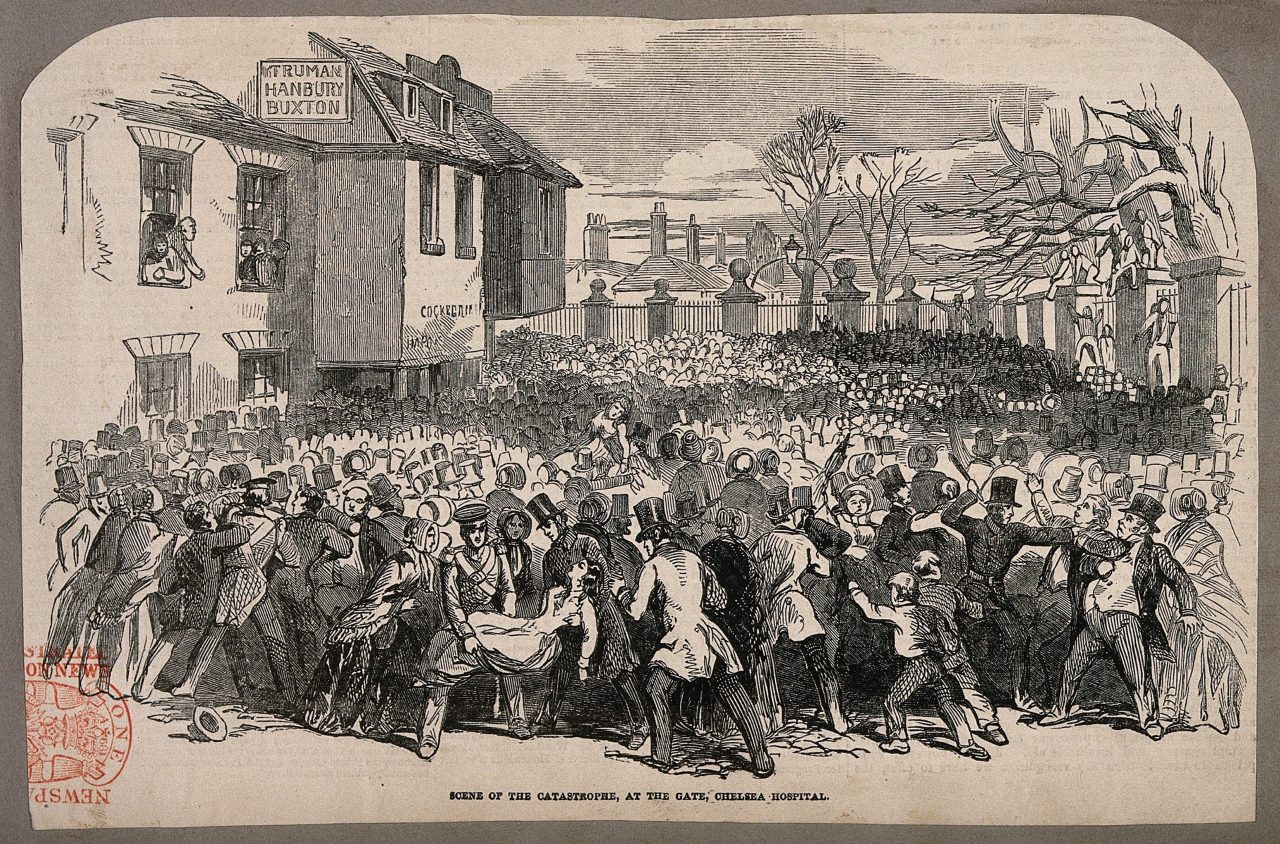 The Royal Hospital, Chelsea: a large crowd outside the wall with constables struggling to keep order. Credit: WikiCommons

We’re going over examples that demonstrate how difficult it is to “follow the science,” especially in the early months and years of something as novel and complex as COVID. Let’s take a look at the phenomenon of:

Previously in this series: Panic is a Virus Part V: Bad COVID Science

By the way, we all know none of that is going to make us better, but we do it anyway because that’s what the doctors tell us to do. As a very smart person once said, the role of doctors is to entertain their patients while waiting for nature to cure them.

Because all the top virologists at WHO and CDC had spent their careers studying the flu virus, they immediately leaped to the conclusion that COVID was spread in the same manner as the flu – that is, by people with COVID symptoms. But why assume asymptomatic spread of COVID didn’t happen unless you were buried so deeply in your flu silo you couldn’t see out of it?

After all, there are lots of viruses around and many are spread by people with no symptoms at all. Consider HIV. People suffering from AIDS can be asymptomatic for years – even a decade – and meanwhile they are unknowingly infecting their sex partners who, possibly asymptomatic themselves, infect their sex partners and so on. It was HIV’s asymptomatic spread that was partly responsible for the terrible scourge of AIDS.

Almost immediately after the pandemic began, scientists outside WHO and CDC began to assert that COVID could be spread asymptomatically and that asymptomatic spread might even be the main transmission method. Among these people was Dr. Deborah Birx, who served on President Trump’s Coronavirus Task Force. Dr. Birx wasn’t smarter than other virologists, but she wasn’t distracted by the flu theory because she had spent most of her professional life working on AIDS.

But this was bad science. We now know that asymptomatic transmission wasn’t “very rare” and it didn’t represent “5% of cases” – people without symptoms transmit more than 50% of all COVID cases. This was clearly shown in a study published in the Journal of the American Medical Association (JAMA) in January 2021, which concluded that “transmission from asymptomatic individuals was estimated to account for more than half of all transmission.”

It’s also important to understand that the term “asymptomatic” includes a great many people:

(1) Some asymptomatic people are presymptomatic, that is, they will develop COVID symptoms but haven’t yet experienced them even though they have been infectious for some time.

(2) Some asymptomatic people will never experience symptoms even though they are infectious.

(3) Some asymptomatic people are really symptomatic, but the symptoms are so mild they don’t recognize that they have COVID and are infectious.

It seems highly likely that these three kinds of asymptomatic people vastly outnumber people who are symptomatic-and-infectious.

By refusing to acknowledge the profound role of asymptomatic spread of COVID, WHO and CDC allowed the disease to spread much faster than it would otherwise have done, resulting in tens of thousands of unnecessary deaths.

We can begin to get a handle on the importance of asymptomatic spread by looking at rare instances of “universal testing,” that is, places where everyone was tested regularly whether they had symptoms or not. Consider college campuses.

In the fall of 2020 most colleges and universities remained closed, with students attending classes, if at all, remotely. Some colleges tried to open, but as soon as COVID cases began to rise they closed and sent everyone home.

But a few institutions bucked that trend. They opened for in-person classes but – critically – tested every student, staff and faculty member regularly. The University of South Carolina tested half of its (35,000-strong) student body every week, and the other half the next week, and other thoughtful institutions did the same.

The results were telling. Across the society generally, asymptomatic spread was, as noted above, estimated at about 50%. But by testing 100% of the student population, it was discovered that asymptomatic spread approached 95% of total spread. By identifying and isolating sick students who had no (or few) symptoms, these universities halted the pandemic within their own borders, allowing them to remain open.

Clearly, viewing asymptomatic spread as a trivial issue was bad science, but we all believed it and conducted ourselves accordingly. If we didn’t have symptoms we didn’t get tested and many of us unknowingly infected others. What WHO and CDC should have recommended is that everyone get tested regularly whether they had symptoms or not.