The 13th and final installment of “On Agency”
by Greg Curtis 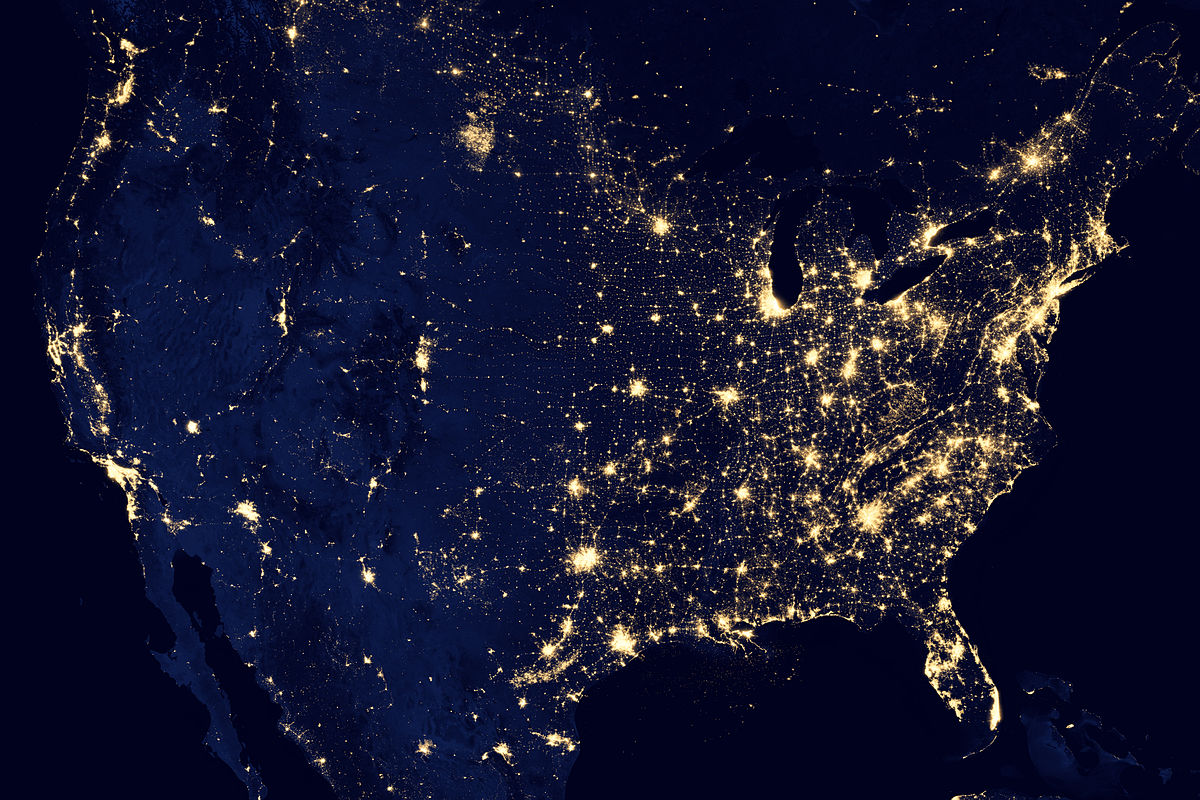 This image of the United States of America at night is a composite assembled from data acquired by the Suomi NPP satellite in April and October 2012. Credit: NASA Earth Observatory

“The defense of agency is what individual human rights are meant for.”  James Griffin

Previously in this series: On Agency, Part XII, The Complexities of Institutional Racism

Last week I pointed out that controversial policies like DEI, microaggressions, safe spaces, trigger warnings and so on shouldn’t be viewed with so much alarm for the simple reason that they represent attempts to extend to disadvantaged citizens the same very high agency that members of the dominant culture have enjoyed for centuries.

If all Americans can ultimately possess high individual agency, America’s global competitiveness would be not just unchallenged, but probably unchallengeable. The only societies that either are able to challenge America or that wish to do so whether they are able or not – China and Russia, respectively – are collective agency societies. As we’ve seen, their light can burn bright for a period of time, but ultimately collective agency societies always fail.

This is a very large topic, but I’m going to shorten it by focusing on just one issue, albeit an important one – free speech. But before we get there let’s step back and examine the problem more broadly.

It is extremely difficult for non-disadvantaged people to understand how crushing it can be to live in a society with a dominant culture you are not a member of. Our culture – or ethnic group – is the basis of our identity as human beings, and loss of that identity is a profound harm.

Philosopher James Griffin, quoted above, puts the issue like this: “For a society at large to treat a minority culture as of negligible importance, for it to reflect back upon its members a demeaning picture of themselves, can be a form of oppression. To be held in low esteem by society at large easily turns into holding oneself in low esteem. There is a constant danger that … a dominant culture in a society will stifle minority cultures. Minority cultures can unfairly, even if by no one’s conscious wish, end up with many fewer resources.”(Emphasis supplied.)

One of the resources disadvantaged persons can end up with less of is agency. In other words, when we roll our eyes at microaggressions or safe spaces, we can only do so because we dramatically underestimate the harm that demeaning comments or behaviors can cause.

So let’s assume for the moment that preventing microaggressions, offering safe spaces, encouraging trigger warnings and even, at the extreme, cancel culture, are, if problematic, perhaps necessary ways to encourage the growth of agency among disadvantaged persons.

But that still leaves the issue I identified earlier: what if those efforts so reduce the agency of members of the dominant culture that America as we have known it for centuries ceases to exist?

I’ve chosen to look at this issue through the prism of free speech because almost everyone across the political spectrum (except at the very extremes) agrees on the importance of free speech to any sort of progress: social, political, scientific, artistic, cultural, and so on.

And yet, consider the parlous state of free speech in America. Just the other day the New York Times published a long lead editorial (3,000 words) entitled “America Has a Free Speech Problem.” The Times cited the usual litany of concerns – cancel culture, public shaming and so on on the left, while decrying the right’s attempts to prohibit what can be taught in schools. As noted in the editorial, 84 percent of Americans believe that the inability to speak freely, out of fear of retaliation, harsh criticism, or shaming, is a serious problem.

At the same time, as we undercut the competitiveness of America we empower collective agency societies. Those societies watch America tear itself up over the challenge of extending agency to everyone and conclude that America is in precipitous decline.

The only way to prove the autocrats wrong is to find ways to increase the agency of the disadvantaged without decreasing the agency of the advantaged. This will require patience – sometimes extreme patience – on the part of the dominant culture. But it will also require a great deal more common sense and sensitivity, and a great deal less moral arrogance, on the part of those advocating policies like microaggressions, safe spaces, trigger warnings, shaming, cancel culture, Critical Race Theory, and so on.

I argued elsewhere in these pages (“On Populism,” 2017) that the well-meaning attempts by socialist and Communist societies between World Wars I and II to demand rapid, almost utopian reforms failed miserably. Those attempts led not to the achievement of those reforms but to resistance so powerful that fascist tyrannies resulted. As I said back then:

“People want reform, they welcome improvements that make their societies more fair, effective and inclusive. But they won’t tolerate reform that is so rapid it threatens practices that have governed their lives for centuries … Reform needs to happen, but it needs to happen at a pace that can be assimilated.”

Still, what is remarkable is that, after reaching the limits of legal reform and after battling traditional racism until it barely exists – all without much diminishing the gap between the dominant culture and our most disadvantaged citizens – America has turned to what it knows best: allowing the power of very high individual human agency to flourish, and no longer just among historically dominant groups.

Next up: A Coat of Varnish