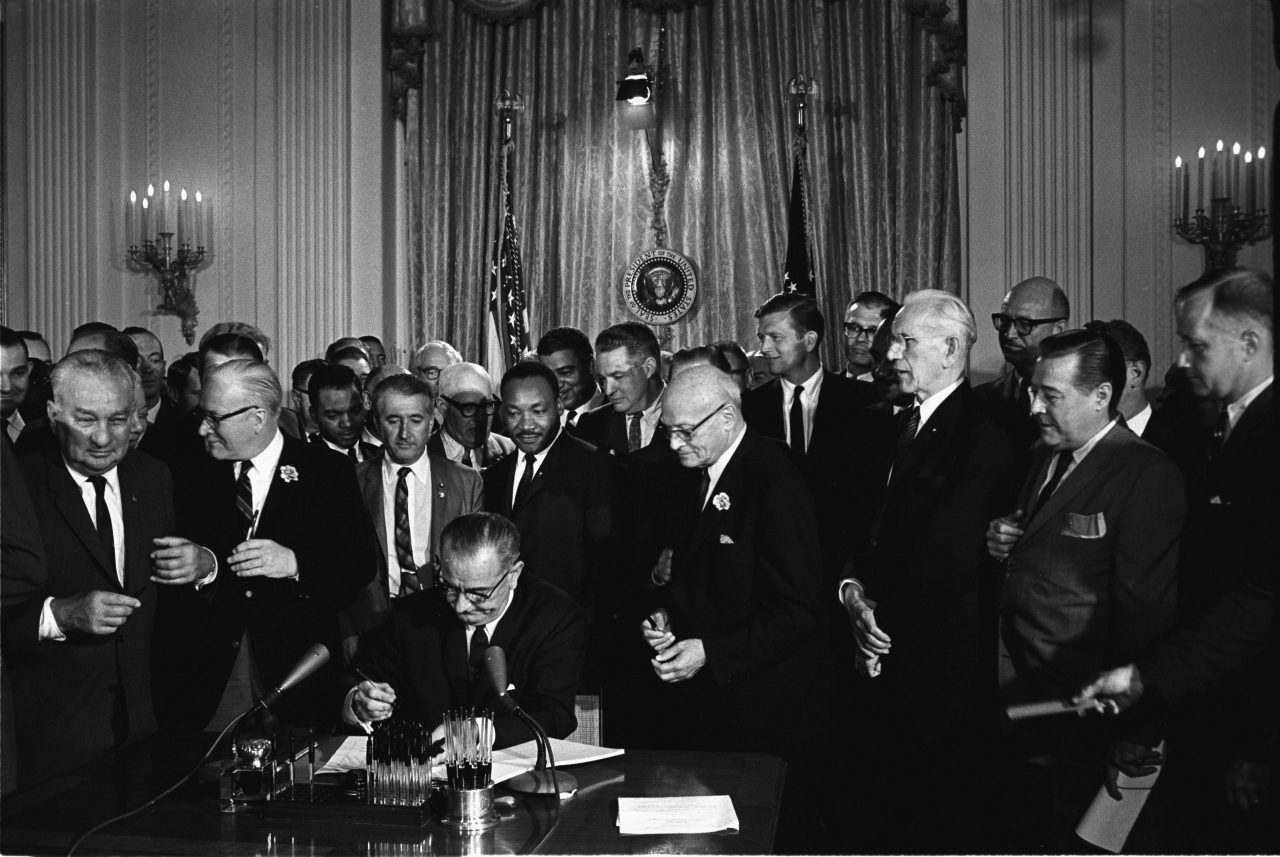 Lyndon B. Johnson signs the 1964 Civil Rights Act as Martin Luther King, Jr., others look on.

In my discussion of the extraordinarily high individual human agency in America, I have deliberately omitted – until now – an important caveat: not everyone in the U.S. has historically been, or is today, vouchsafed the same degree of agency.

Previously in this series: On Agency, Part X, The Sniping About America is Nothing New

As we all know, various people who possess certain characteristics – race, gender, religion, and so on – have had their agency constrained for all sorts of reasons, including racism, sexism, and other bigotries.

It was clear from the very beginning of the country’s existence that certain groups – especially African-American slaves – possessed very little agency. A war was fought over this issue and the slaves were freed.

But simply not being enslaved is very different from possessing high agency. Racism, indifference, Jim Crow, and other factors continued to constrain both former slaves and African-Americans in general, including those who had never been enslaved.

As a result, Congress enacted the Civil Rights Act of 1866 – over President Johnson’s veto – prohibiting discrimination “on account of race, color, or previous condition of servitude.” And for the next century African-Americans remained the focus of America’s attempt to become a more inclusive society.

But let’s fast-forward to the mid-1960s and the Civil Rights Act of 1964. Like the 1866 Act, the 1964 Act was intended to be all about African-Americans and their special history and disadvantages.

Indeed, many African-Americans believe that it was not until 1964 that they became full citizens of the United States, possessing rights equal to those possessed by the majority culture, rights that were given special protection in recognition of the historic disadvantages African-Americans had endured.

But interesting things happen as a bill wends its way through Congress. Although the title of the 1964 Act declared that it is U.S. policy that discrimination shall not occur “on the ground of race, color, or national origin” (i.e., language harkening back to 1866), this list was expanded dramatically later in the legislation.

The importance of this for our purposes isn’t the issue of women specifically. What is of momentous importance is that the 1964 Act represented the official adoption in American law of group rights. African-Americans were certainly a “group,” but that group had endured such a special history that they had been viewed as distinctive for a century.

Certainly, as a matter of justice, these additional groups fully deserved their newly protected status. But in America’s eagerness to help every disadvantaged group we managed to disadvantage the original protected group: African-Americans.

Analyzing this phenomenon in terms of human agency, we can easily see that group rights represented a collective agency approach to the problem of unfair discrimination. And we can also see that, however well-intended, it was likely to fail.

Let’s engage in a brief thought experiment to try to understand whether the idea of group rights – collective agency – was ever likely to prove an enduring source of progress for disadvantaged groups.

Let’s assume, first, that the only protected group is African-Americans, roughly 12% of the U.S. population. Giving that group special protections and affirmative assistance (affirmative action, set-asides, etc.) would seem likely to lead to significant progress. After all, the other 88% of the public wouldn’t have access to those advantages.

Certainly the U.S. Supreme Court thought so. In the case approving affirmative action in college admissions, the majority opinion, written by Justice Sandra Day O’Conner, specifically justified the use of special preferences because they were expected to be temporary: “Race-conscious admissions policies must be limited in time. … The Court expects that 25 years from now, the use of racial preferences will no longer be necessary.”

But the Court was wrong and our thought experiment helps explain why. African-Americans haven’t been granted special preferences – they have had to share those rights with most of the rest of the public. In other words, while these groups were added out of legitimate concern for their welfare, the result was that African-Americans have been forced to compete with most of the rest of America – almost exactly their situation before the 1964 Act.

Collective agency solutions almost always seem seductively attractive, but in the end they represent an attempt to solve problems by brute force and are usually destined to fail. And in fact, by many important metrics African-Americans are worse off today, relative to white Americans, than they were decades ago when group rights first emerged:

In 1970 African-American men earned 59 cents for every dollar earned by white men. Today, almost six decades after the 1964 Act, that number is 56 cents.

According to Dædalus magazine, in 1980 12% of African-American male high school dropouts were incarcerated. By 2008 the number was 37%. (It has declined somewhat since then.)

It goes without saying that these are statistics – and we could have added many more – that America should be deeply ashamed of. But if we skip all the usual explanations and instead examine the phenomenon solely through the lens of human agency, it should hardly be surprising that a collective agency solution would ultimately fail to improve African-American lives.

The failure of group rights to live up to the high expectations they generated left individual human agency once again as the best hope for progress for disadvantaged individuals, despite its past failures. But individual agency was about to encounter yet another, and far more powerful, movement. We’ll take a look at that next week.

Next up: On Agency, Part XII