Oh, Say Can You Sing? 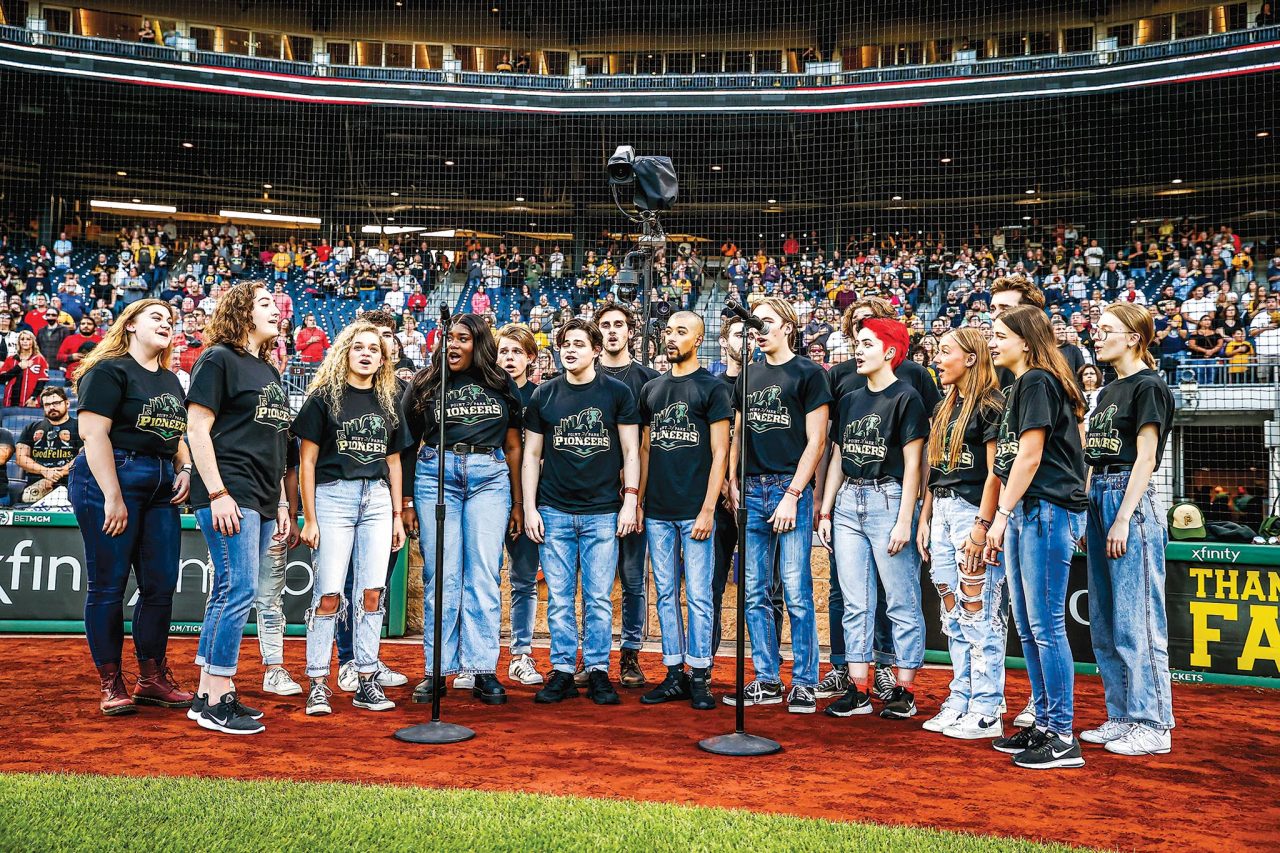 During the winter months, every executive in the Pittsburgh Pirates organization is thinking about the upcoming season. Chris Serkoch isn’t pondering who’ll bat clean-up, whether a platoon will work in left field, or how she can line up the bullpen. Her concerns, though, are just as vital. Serkoch is wondering who will perform the national anthem on Opening Day.

For 20 years, Serkoch has booked every national anthem performer for the Pirates, an extraordinarily demanding job. And it’s not as if she has nothing else to do. As the club’s director of special events, she’s responsible for just about every non-baseball activity that occurs at PNC Park and environs: post-game concerts; first pitches; fireworks; awards and contribution ceremonies; festivities for kids, such as post-game base running and Federal Street block parties.

But it’s her work as the anthem booker that stands out. Consider how the other local sports organizations handle it. The Steelers put together an appealing line-up, but they need only about 10 performers per season. Hollywood Casino at The Meadows has much more inventory — about 180 live race cards each year — but the track uses a recording except for special events, such as Adios Day. Thus, Serkoch is Pittsburgh’s undisputed Star-Spangled Planner.

Her task is lightened somewhat by the Pirates’ reliance on local bands, choirs and church groups for about 50 anthems each season. Such organizations raise funds by selling tickets to their appearances and retaining up to $7 for each ticket sold.

“I don’t need to audition or listen to those folks in advance,” she says. “A choir is always going to be okay; the strong singers will carry those of lesser talent. A choir typically will have at least 25 people. The odds are they’ve performed together before. They’ll have some sort of harmony.”

It’s the other group of performers, the soloists, that provides bigger challenges. For them, Serkoch has developed a rigorous, three-phase audition process. First, hopefuls submit their work, typically via YouTube. If Serkoch is interested, she’ll ask them to perform a cappella at PirateFest during the winter. Soloists aren’t permitted musical accompaniment because the PNC Park sound system is a beat behind the actual voices; that would make synching up voices, music and sound system nearly impossible.

Finally, if they get that far, Serkoch invites the candidates to PNC Park to audition. The audience is cozy — just Serkoch and the cleaning crew.

“I want to hear them on our sound system because that delay can throw them off,” she says. “When they start to sing, they’re waiting that half second to hear themselves. That would make for a really long anthem.”

Even without such technical issues, the Star-Spangled Banner is a tough gig. The lyrics in spots are inverted and dated; just ask the dude sitting next to you what a “rampart” is. And the song defies easy harmonies. Serkoch finds herself rejecting about half the applicants.

O say, can you see yourself doing this for 20 years, 81 games per year? Serkoch can, and it continues to matter to her.
“I want the experience to be good,” she says. “I feel like it’s a reflection of the Pirates, a reflection of me, a reflection of our fans. Nothing irritates me more than when somebody sings it and it’s not great. I want them all to be great.”


Once Serkoch has selected her soloists, the next task is finding the best slots for them. Active military and veterans are great for Independence Day, while union members and leaders work well on Labor Day. For the 20th anniversary of 9/11, Serkoch outdid herself.

She booked Allegheny County Deputy Sheriff Ricky Manning to sing the anthem, but she didn’t stop there. She invited family of the doomed passengers of Flight 93 to gather on the field while Manning sang and an image of Old Glory waved majestically. There were many 9/11 memorials across America that day, but Serkoch’s tableau likely was among the most moving.

Over the years, Serkoch has picked up a few tricks to help her avoid disasters. She stands as close as possible to performers without invading their space to cue a forgotten word or line. She keeps a pair of earplugs handy in case a soloist needs to block out that pesky sound system.

And she has several performers on call to cover for any last-minute cancellations. Serkoch tapped one such fill-in, a Pittsburgh schoolteacher and season ticket-holder named Tim Pollack who also happens to be a crackerjack saxophonist, to step up on short notice. Pollack was so outstanding that Serkoch has booked him several times since.

Turns out the Star-Spangled Planner does need to line up her bullpen.

After 20 years of booking national anthem acts for every Pirates home game, Chris Serkoch has firm ideas on what makes a strong performance.

“The best anthem singers, in my opinion, are the ones who sing it as it was written and don’t try to be Mariah Carey,” she says. “They don’t try an arrangement where the song is not recognizable; it’s a hard enough piece of music, and if you can master it just the way Francis Scott Key wrote it, that’s hard enough. Even though you can do all the vocal acrobatics in the world to try to make it your own version, it is still our nation’s anthem.

“So I like the versions that are truest to the way it is written, and when people sing it with a little bit of meaning and they feel like they’re really singing the song of our country. That comes across, and you don’t need to do all the extra stuff.”

With that in mind, here are Serkoch’s rankings of the best and worst anthem performances at PNC Park.

WHAT SO PROUDLY WE HAILED

#4 Key penned the song that would become our anthem in a burst of patriotism in 1814 when young America was again at war with its former colonial bully. So offering the anthem stage to a British rock band may not seem, at first blush, a great idea. What could possibly go wrong? But when the British group Foreigner was scheduled for a post-game concert in 2008, Serkoch invited them to perform the anthem.

The lads ate it up, introducing a version in intricate five-part harmony that was creative and memorable.

#3 This one’s a tie because how do you separate two really cool cello performances? One was by the locally based group Cello Fury and the other featured the Pittsburgh Cello Quartet, an ensemble of Pittsburgh Symphony players led by principal cellist Charlie Powers.

These versions were not ”Rockets’ Red Glare” stuff. They were unexpected, understated, sophisticated. Cello Fury performs nearly every season while you can catch the Pittsburgh Cello Quartet here: https://www.mlb.com/video/cello-quartet-s-national-anthem-c1903332583

#2 The anthem performed by cellos? Okay, we can see that, but what about a choir of harps, 14 of them to be exact, doing the honors? It happened in 2019 when Serkoch was approached by two professional harpists who offered to perform along with 12 of their students. Serkoch bought in, but logistics proved a challenge.

Getting 14 harps on and off the field quickly proved quite a task. Then there was the problem of rain. With high-end harps costing up to $150,000 or more, Serkoch couldn’t risk even a drop of rain and had to postpone the performance until a dry September day. The result?

“It was beyond stirring.”

Enjoy the performance at https://www.mlb.com/pirates/video/harps-choir-performs-at-pnc

#1 The National League Wild Card Game at PNC Park on Oct 1, 2013 was historic. Not only did it mark the return of the Pirates to the post-season after a lengthy absence, but the on-field action also became unforgettable when Cincinnati pitcher Johnny Cueto inexplicably dropped the baseball while on the rubber. Fans serenaded the unlucky pitcher with derisive chants of “Cue-to, Cue-to.” But they weren’t the only ones serenading.

The anthem soloist that evening was Perina McCutchen, mother of then-Pirates center fielder Andrew McCutchen who had been recommended by her son. She went through the audition process and the result was . . . well, check it out yourself at https://www.youtube.com/watch?v=rWY98XrdZTk. You’ll find yourself singing along as most of the crowd did, and you’ll love the shots of Cutch, stoic throughout, until he finally embraces his mom.

Such was the case with one singer so unnerved she looked as though she might swoon. Serkoch jumped to her aid — Remember? Stand close to the performers? — and discreetly helped her stand and make it through the performance.

#2 The Pirates usually allocate two minutes for anthem performances — 1:40 for the anthem, 20 seconds for introductions. Most singers easily stay within those confines — unless they’re distracted by the sound system. That happened to one singer, who confidently turned down Serkoch’s offer of earplugs and fell victim to the delay.

“I did not listen to my gut,” Serkoch says. “I should have got the earplugs and jammed them in her ears myself. Her anthem was almost three minutes long. Three minutes! (Then-Pirates Manager) Clint Hurdle slowly turned and looked at me, stared at me, and then turned back around.”

#1 Chalk up this one to nerves, too. A soloist confidently stepped up to the mic, started to sing . . . and out came God Bless America. To her everlasting credit, she kept right on going and probably convinced most fans that this was a scripted change in the program. It most assuredly was not.

The Selling of Mellon