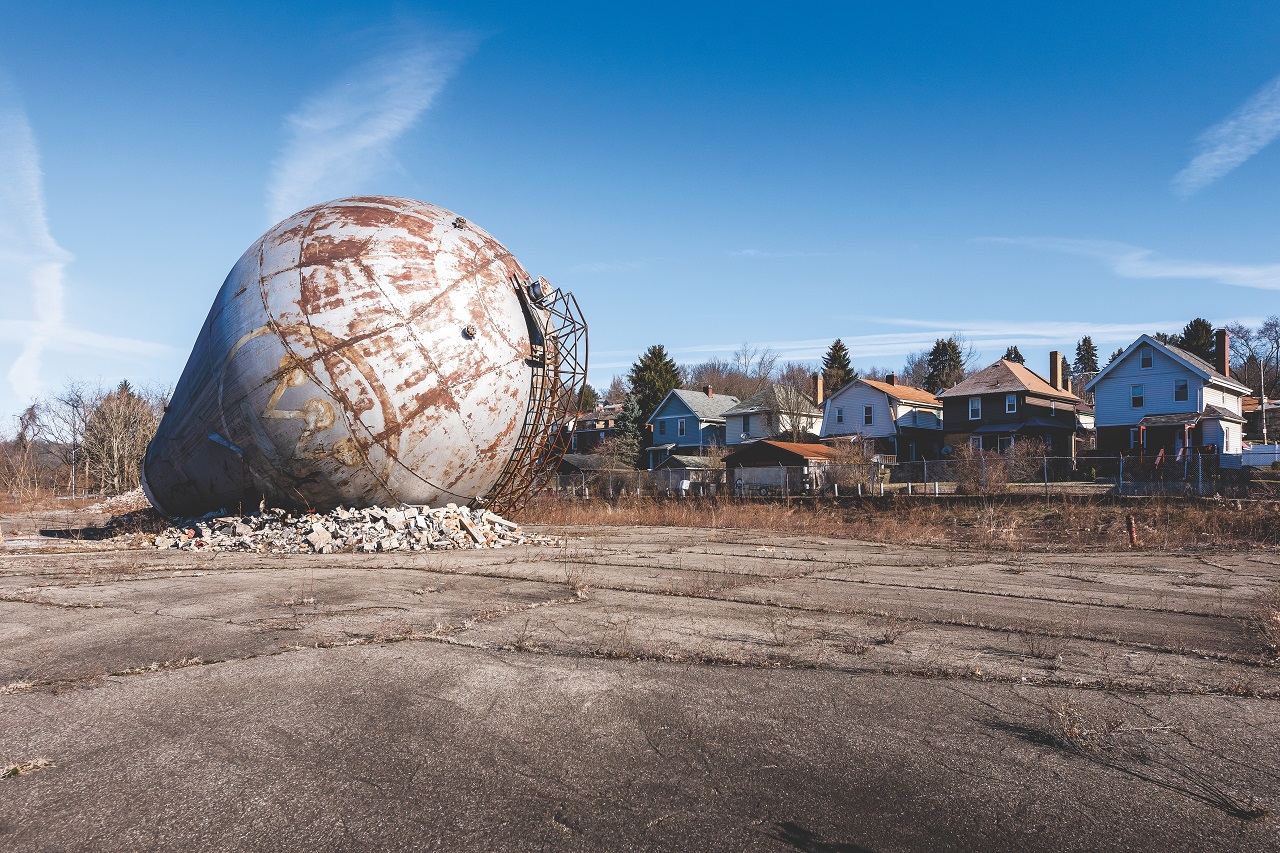 Last October, my husband and I were driving through the eastern Pittsburgh suburb of Forest Hills when our physics buff son Mark blurted out, “Hey, there’s an old atom smasher around here somewhere. Can we go see it?”

“Atom smasher?” I asked, with a blank look. “What’s that? A Kennywood coaster?”

“It’s a nuclear reactor,” he replied. “A particle accelerator. The Westinghouse Atom Smasher right off Route 30. I always wanted to see it.”

Mildly curious, we took a detour as Mark directed his dad via GPS to the exact spot. I didn’t know what to expect. Would it be a larger version of the “Star Wars” robot R2-D2? Maybe the Enterprise from “Star Trek” or HAL, the know-it-all computer from “2001: A Space Odyssey”?

“No, to research energy,” he said. “For nuclear medicine, stuff like that. A super high voltage caused subatomic particles to accelerate to high velocities in a vacuum tube. It’s like a laser beam bombarding targets to create nuclear reactions. It generated five million electronvolts of energy.”

We easily found the site near a neighborhood bar named Tugboat’s, behind a row of modest brick houses. Beyond a chain link fence topped in barbed wire was an empty, concrete lot with scraggly weeds growing in the cracks, dead brush and branches, and piles of bricks. And in the middle of all that neglect, a gigantic silver dome, corroded and shaped like a gourd, lay toppled on its side. With a huge capital “W” on its surface, it looked like a discarded, supersized light bulb, the kind made by Westinghouse Electric Corporation.


I recognized the familiar “W” logo immediately and joked, “You can be sure if it’s Westinghouse,” parroting the voice of NFL great Frank Gifford from the company’s old commercials.

“Ooh, way cool,” Mark said. And his dad added in mock astonishment, “Wow, this is awesome, man! The eighth wonder of the world right next to Tugboat’s Bar.”

As they carried on, I remembered a poem I’d read in college, “Ozymandias” by Percy Shelley. It described a broken statue of a once powerful king, fallen from his pedestal and half buried in the sand of a vast desert. Cracked and lifeless, the statue’s head still flaunted its haughty face, cold frown and commanding sneer, with this inscription:

“And on the pedestal these words appear:
‘My name is Ozymandias, king of kings:
Look on my works, ye Mighty and despair.’
Nothing beside remains. Round the
Decay of that colossal wreck, boundless and bare,
The lone and level sands stretch far away.”

Like Ozymandias knocked from his majestic throne, the atom smasher rested ignominiously in a deserted lot, forgotten in impotent repose. I wondered, what almighty deeds had it accomplished in its prime?

Its legacy is linked to the company that created it. For years, Westinghouse was a revered name, perhaps Pittsburgh’s greatest titan of industry, founded in 1886 by George Westinghouse, the unparalleled inventing genius who bested Thomas Edison in the race to bring electricity to the world. Westinghouse Electric was a corporate dynasty among corporate dynasties, thriving for a century as the prolific creator of the railroad air brake and electrical equipment of all kinds, constantly expanding and diversifying, into broadcasting, military systems and nuclear reactors.

In 1906, the company established its Research and Development Division in Forest Hills, where the atom smasher debuted in 1937. The 65-foot-tall generator was invented in 1928 by Robert J. Van de Graaff. Also known as an electrostatic nuclear accelerator, it produced prodigious amounts of energy through nuclear fission, splitting a nucleus within an atom. The intent was to harness it for everyday uses, like powering residences or treating cancer.

“Technically, it didn’t smash atoms, it smashed nuclei, which are parts of atoms, one nucleus per atom,” Mark clarified. “In the center of the tower, two high-speed conveyor belts carried electric charges to the top of a 47-foot-tall vacuum tube. As the charges accumulated, they created a high voltage between the top and bottom of the tube. Protons injected at the top were accelerated by the voltage, causing them to race to the bottom and collide with fluorine atoms.” He paused, took a breath and continued. “Because of the violent collision, the fluorine atoms released high energy photons called gamma rays which then collided with a nucleus — either uranium or thorium — breaking it apart and radiating energy,” he concluded, adding triumphantly, “tons and tons of energy!”

For minds less intoxicated with science, here’s an analogy. Picture climbing a ladder to the top of the Empire State Building and dropping a bowling ball onto the street below, shattering panes of glass stacked on the sidewalk into thousands of bits and pieces. As more shards — representing nuclei — splinter into tinier fragments, they release more and more energy exponentially. That’s the beauty and the danger of nuclear fission. The process generates abundant power to meet our needs, but also enough to obliterate a city like Hiroshima. When Albert Einstein realized the deadly potential of his signature equation (E=mc2), he famously remarked, “If only I had known; I should have become a watchmaker.”

The Westinghouse Atom Smasher, however, embraced a nobler cause with its groundbreaking research: directing nuclear power toward civilian purposes. Eventually, the hard-working generator outlived its usefulness and in 1958 was decommissioned. Although the Forest Hills facility continued to conduct research through 1995, it closed in 1996 and was sold to a private investor in 2012.

By 2015, the property was so dilapidated, the owner had it demolished, detaching the atom smasher from its support structures and setting it on the ground, its fate uncertain with preservation efforts stalled. Despite being hailed as an engineering milestone and designated a historic landmark, it lies there, an outdated ruin in a vacant lot, like Ozymandias in the barren sand, crumpled idols both.

Diane Vrabel is a freelance writer who has been published in local newspapers and magazines. She is retired from the federal government.

Arthur Ziegler: The Power of Community

When Mother Came to Pittsburgh