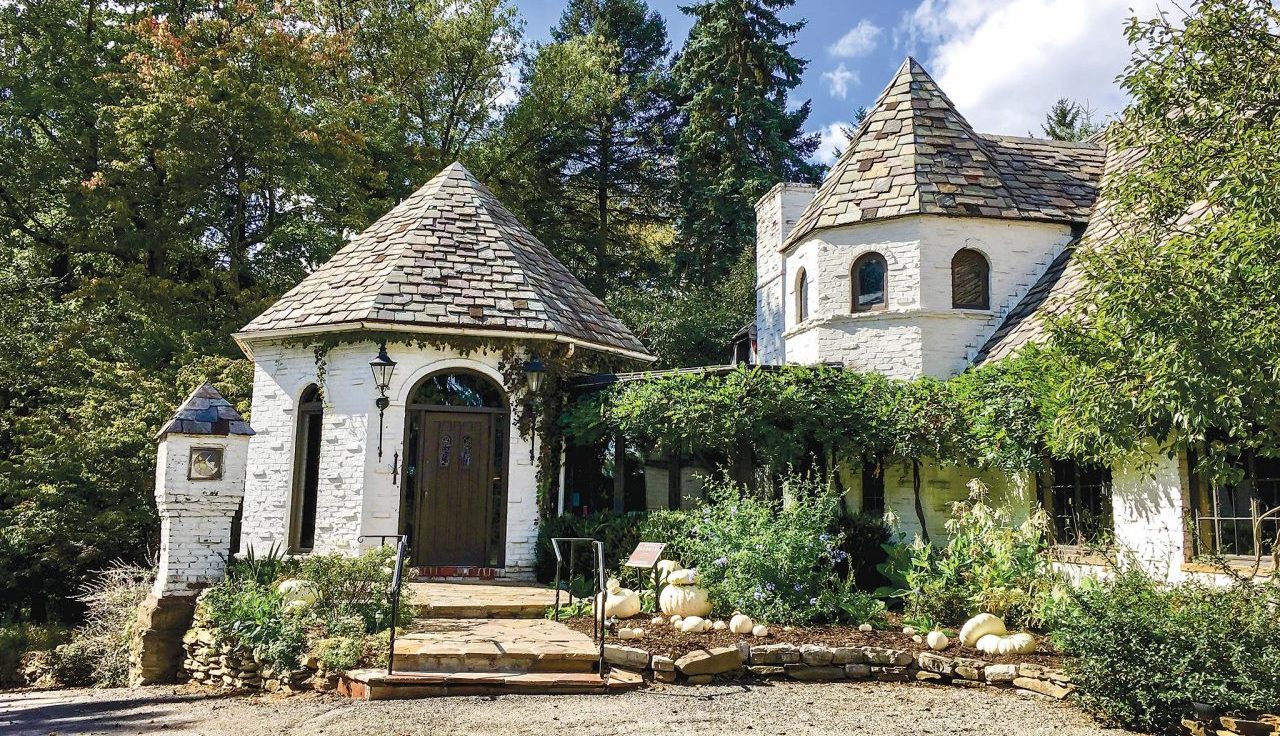 Being almost 88 and having spent three-quarters of my life at Hyeholde, writing the story of the restaurant my parents created is a piece of cake for me, and a delicious piece at that.

In 1931, my parents bought six acres of farmland and, with income from working three months each year at a lovely tea room in coastal Connecticut, they were able to come home and build their dream castle. They harvested local materials — a beautiful old barn and used brick and slates from nearby buildings ready for demolition. To live in, my parents bought a Sears Roebuck Cape Cod precut home they had to erect themselves. My father said Sears sent so many extra nails, screws, and hinges that he couldn’t have built Hyeholde without them.

Those were deep depression years and local hardware and construction companies were generous and curious about this strange thing the crazy, skinny guy and his wife were building on the hill.

The curious and unemployed would come to help for 50 cents an hour or just to have something to do. Mostly it was family who gave muscles and encouragement — uncles for heavy lifting and aunts to babysit my sister Romaine and me while Mother planted 1,000 seedlings, painted and stained.

Month by month, snowstorm by snowstorm, followed by spring and the annual trip to Connecticut, the dream took shape. It looked less like a castle and more like the half Tudor, half Normandy lovely country estate it is to this day.

On October 16th, 1937 after six years of the proverbial but true blood, sweat, and tears, the first phase of Hyeholde opened with Mother as chef and Dad as host in a treeless cornfield on a hilltop in rural Moon Township. The first customers — Mr. King and his girlfriend — saw the sign at the bottom of the driveway and took a chance. They left happy! Nobody came for the next three days, but then the phone began to ring. Gradually “word of mouth” and my father’s charming written invitations to the locals worked. It was only half finished, with piles of materials around and 600 feet of rutted driveway to navigate, but Hyeholde was alive and electric!

During those pre-war years, business grew. Young men and women were hired to help serve wedding breakfasts, lunch, teas, and dinner. My sister and I were still too young to be helpful and we either played outside most of the day, were babysat by aunts and uncles or locked ourselves in the bedrooms and read books and played games.

With the help of the young waiters who wanted extra money and the remaining materials, Dad was able to finish the last half of Hyeholde.

As World War II neared, the government bought the 1,00-plus acres of nearby Bell Dairy Farm. The military airport was to defend the vast array of factories up and down the rivers that were producing a great percentage of supplies needed for the American effort. Soon B24 and B17s were on a landing pattern over our parking lot and flying so low you could almost reach up and touch the pin-up girls painted on their noses. Our customers loved it and so did I. Oh, to fly black spiders or mustangs when I grew up! This also meant our spirited employees donned military uniforms or went to work in nearby factories. With a limited inventory for the menu and just family to work, Hyeholde cut back to serving only dinners and special events. This was doable and my father actually enjoyed the diminution of paperwork for authorities.

By 1947, Hyeholde was a success and the military airport had become the Greater Pittsburgh Airport. The main highway system between it and Pittsburgh was in use and homes were needed for people flocking to the area. My father’s vision went into overdrive.

With money from strip mining four of the original six acres, he bought a nearby farm and began a second career as a real estate developer, building 16 more homes along the way including a unique, almost plagiarized design from Frank Lloyd Wright, his idol. As the company was strip mining behind Hyeholde, they also mined in front of the parking lot leaving a large gouge. Dad was delighted not to have to excavate and in 1952 built a beautiful stone and glass passive solar home which they rented out until 1974.

But the balancing act of running a restaurant and real estate ventures kept Dad in muddy overalls more often than his signature beret, and although the sales of lots and homes sent Romaine and me through college, Hyeholde suffered somewhat from lack of focus.

More years passed, Romaine married and moved away and I developed my own interior design business but would spend an equal amount of time in the restaurant in any capacity.

In 1973, I married a wonderful man with six children and with my prefab family well in hand and tears of both blissful anticipation and happy memories, I bid Hyeholde goodbye.

Mother’s health gradually deteriorated and with Dad unable to carry on without her and me, they made the painful decision to sell Hyeholde, their pride, and happiness to Pat and Carol Foy. The Foys had a restaurant history in Pittsburgh and were eager to try boosting Hyeholde to a more cosmopolitan level. They opened the bedrooms to dining space, enclosed the west wing porch for more, and enhanced the menu and wine lists. They succeeded in converting it from a charming country restaurant into a sophisticated operation without losing its charm.

In 1986, with Hyeholde at its peak, the Foy’s built a new entry, tunneling underneath the driveway, and connecting the Round House to Hyeholde. That was an expensive feat known as “The Cabaret,” and it served the Foy’s as an adjunct nightclub until 1991.

But timing is all and when the steel business collapsed, the trickle-down shudder was felt everywhere. The airport wasn’t bringing all those corporate salesmen and young entrepreneurs with their limitless expense accounts. That era was gone and more than one “would-be vice president” cried in his one beer instead of three martinis. Hyeholde had bills to pay and business was going south.
During that time major changes happened in my life too. Ten years after we were married, my wonderful husband died and with my prefab family grown, I began planning a newly single life renovating homes. It was while building my own dream house that I met Quentin McKenna, a great cook, and lover of fine foods. (How could I pass him up?) We eventually married and promised each other: no pets, no second homes, and no restaurants. Within two years we were back in the restaurant business.

We started a “New Beginning to an Old Tradition” at Hyeholde, and it continues to be a work in progress. Quentin died 19 years ago, but my mind never ceases to wonder how Hyeholde can grow and improve. In this industry, it’s imperative to stay abreast of the times, and I’m proud of what my staff and I accomplished (even the attempts that didn’t quite make it).

In the last 31 years, we’ve added five new dining venues to the originals: picnics on the grounds, the herb garden patio, Q’s, our cozy, rustic pub, and the first chef’s table in the kitchen in Pittsburgh. And with the gratuities from the chef’s table, we’ve sent our cooks to fine dining restaurants around the country. It’s a nice perk and a learning experience, and they must write a paper about it when they return.

Our vegetable garden augments purveyors’ produce and supplies us with herbs, and each year our three bee hives produce about 150 pounds of honey.

We’ve been acknowledged by Gourmet Magazine as one of 25 “Legendary Restaurants in America” and we’re one of the first restaurants presented on “Food Network.”

We’ve spawned numerous chefs who now own or serve as executive chefs in top restaurants. But customers come for more than food and ambiance. Our wait staff’s experience, warmth, and eagerness to please have built warm and lasting friendships for Hyeholde. From the dishwashers to the managers and valets, I believe my staff is unequaled. They present a whole package of goodies – I call it “A Feast for all the Senses.”

For the past 85 years, our customers have come from “down the road apiece,” from across the state, country and around the world. So many have been impressed that such a unique restaurant exists in, of all places, Pittsburgh. I say, “of course, why not?”

Throughout my tenure, my goal has been to adapt and flourish with each new iteration of our great city, but now, though I will still own the real estate and stay somewhat involved, Executive Chef Chris O’Brien will be the restaurant’s fourth owner. He was with Hyeholde for 16 years and left for 11 to open his own establishment and learn at the helm of several more. Two years ago, he returned more experienced with a passion for fine dining and love for Hyeholde.

It will be Chris who will find Hyeholde’s place within “Ed, Meds, and driverless cars” and his vision that will move Hyeholde forward yet keep the best of what came before.

I wish him Godspeed.

A Fresh Take on a French Classic

How About a Delicious Peach Cobbler (and more)?

A Bowl of Porridge by Any Other Name (Oatmeal!)