Pusadee’s Garden closed even before the virus shuttered restaurants across the globe, and like a butterfly leaving its cocoon, it has emerged from hibernation with a resplendent new look. It took close to four years for the transformation, but the popular Lawrenceville Thai restaurant that once boasted a pretty garden and a small indoor space is now an architectural delight. 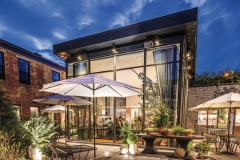 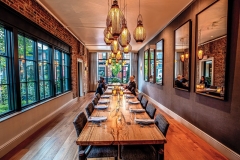 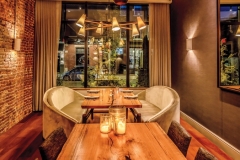 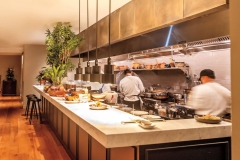 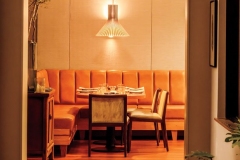 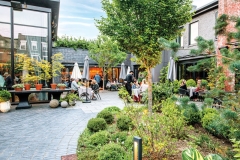 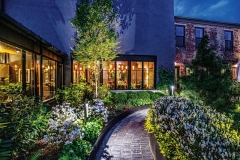 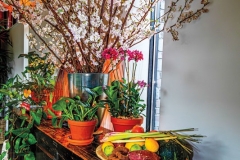 The purposefully discreet street façade doesn’t hint at the surprise on the other side of the door. There waits the new garden, filled with curving walkways defined by careful landscaping and specimen plants in giant urns or on cement tables that create the feeling of a giant outdoor room. And of course, there are the umbrella tables that beckon diners on warm evenings. The effect is transportive, vaguely tropical, certainly magical yet somehow elegant and sophisticated.

Much of the credit goes to Andrew Moss and his team at mossArchitects, but the vision came from the owners, Michael Johnson, Watcharee Tongdee and her sister Bootsaba Tongdee. Johnson and Watcharee became business partners in 2004 when they opened Typhoon, an upscale Thai restaurant on Highland Ave. in Shadyside. They converted it into the more casual dining spot Noodlehead in 2012. Pusadee is the Tongdees’ mother and de facto “chef” of the family, involved in creating the restaurant’s multi-regional, home-style Thai food.

“They were amazing clients who were just so dedicated to creating an experience in design and food, the whole experience,” Moss says. “To some extent there was the intention of bringing authentic atmosphere to the restaurant, but with the understanding that this is Pittsburgh. While we wanted it to have a sense of the character of Thailand, we weren’t trying to create a kitschy environment, a Disneyworld Thailand. We wanted to blend Thailand and Pittsburgh without being artificial about it.”

The idea was to create a restaurant with a courtyard garden oasis that could be enjoyed by diners inside or out.

“One of the issues at the old Pusadee’s Garden that we needed Andrew to address was that most of the customers wanted to sit in the garden, and those sitting inside had no view,” says Johnson. “Also, it was very important for our kitchen crew to be able to enjoy the view and be part of the energy of the space. Hence the need to have windows to the courtyard in every room, and the open kitchen. We also wanted to be open all year, with no more winter shutdown.”

Moss’s firm designed the late Union Standard, the Monterey Bay Fish Grotto and Willow, among other restaurants. He notes there are challenges with restaurants that must be factored into any design, and they go beyond working with chefs, whom he calls “a unique breed.”

“Often we are working with existing buildings to meet their needs,” says Moss. “It’s about creating a sense of character and atmosphere, but also making sure it functions and flows. Everything has to move through a restaurant effectively, from the front of the house to the kitchen.”

In the case of Pusadee’s Garden, the challenges went beyond the usual. When a neighboring building came on the market, Watcharee quickly bought it. Between the new building and the old Pusadee’s property was a vacant lot, and the idea of creating a restaurant with a garden in the middle was born. The only problem was the lot was not for sale until one day, its owner stopped by to say he was ready and accepted “an offer he couldn’t refuse.”

“When they acquired the adjacent lot and building, the amount of space between them was perfect,” says Moss. “All it needed was the intervention, the front of the garden wall and the back, the kitchen. They each connect the historic buildings. We ended up with this donut. The garden wall, the entry arcade, becomes the threshold between busy Butler St. and this garden oasis inside. Then we made these large masonry openings into the solid walls so that each room had views into the garden.”

Moss notes that he had committed clients and didn’t have to make a lot of compromises. The bar is a great example. Moss envisioned a “jewel box pavilion,” a bright, open space that jutted into the garden and was visible from all sides of the restaurant through its glass walls. He pushed hard for a soaring ceiling, and the owners agreed, though the extra height meant extra expense. The former restaurant is now divided into three intimate dining spaces, each with its own character. Guests can walk by the stunning open kitchen to the new building, which has long tables and can be used for larger groups and private parties.

The décor was a collaboration between the owners, mossArchitects, and Jeff Pierce and Tom Bedgar of Toadflax, who were brought in to plant and maintain the gardens designed by landscape architect Julie Kachniasz. Rob Long’s Clear Story Creative did the lighting and while some of the furnishings are local, including tables by Urban Tree and Tadao Arimoto, many of the clay pots, cabinets, light fixtures and furniture were imported from Thailand.

Of course, the garden is the focal point of the restaurant, and having Pierce and Bedgar join the team at a critical time in the development of the courtyard’s ever-changing look was the final piece of the puzzle. “They were excited to take over the garden courtyard and also be our decorative stylists and art consultants, and we were beyond thrilled that they added us to their short list of garden design clients,” said Johnson.

Now the only problem is getting a reservation. Since its debut in January, Pusadee’s Garden has created a major buzz. And that was before the warm weather meant the popular garden could finally open!