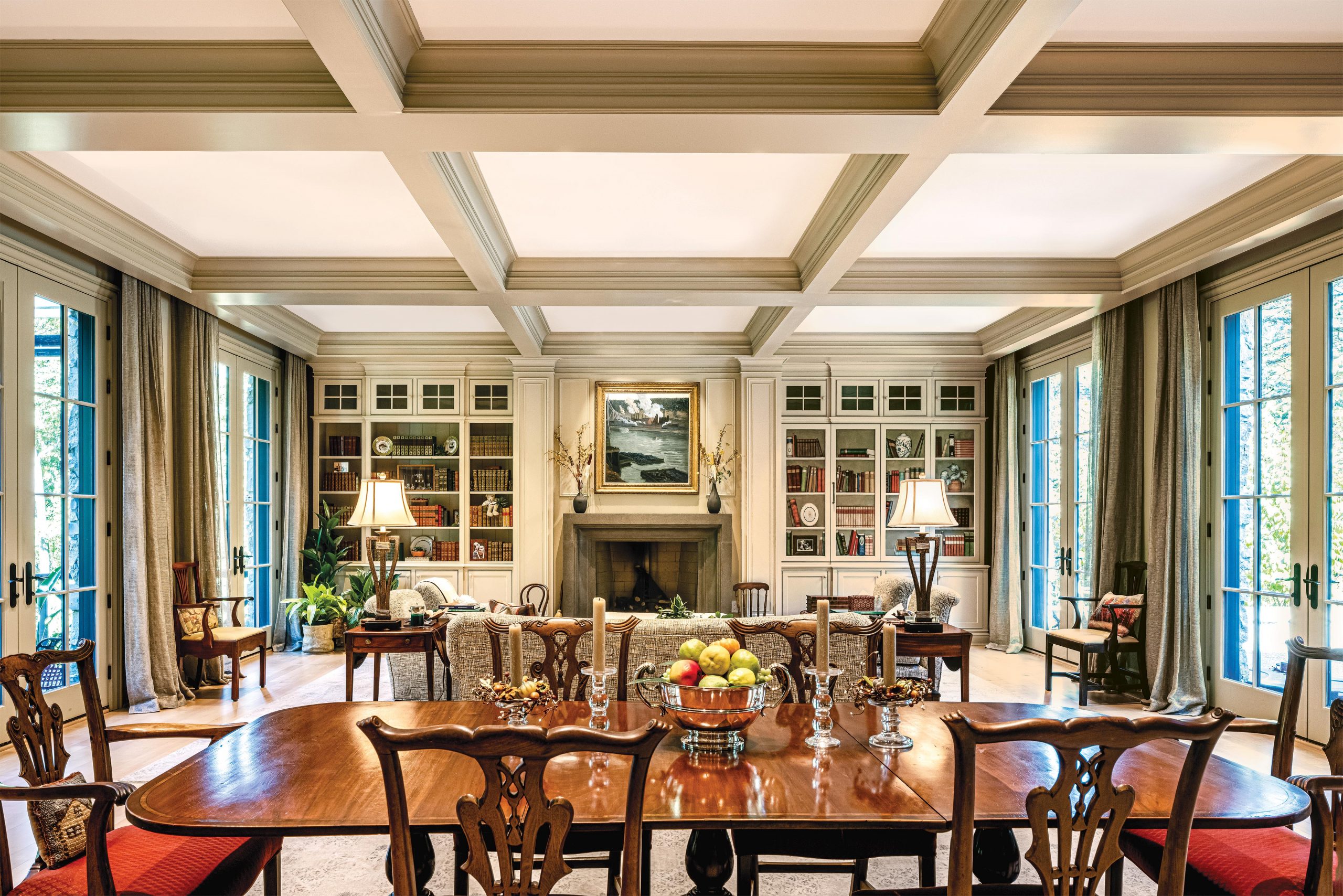 A GREAT ROOM: The living area of this Shadyside home is flanked by six sets of 10-feet-tall French doors. The dining table and Chippendale-style chairs are antiques, and the painting above the mantel is by Aaron Gorson. A loose-weave fabric by Schumacher was used for the curtains by designer Barbara Wright, who kept the colors monochromatic so as not to compete with the views.

Like many couples, the owners of this Shadyside residence decided to sell the sprawling home they had lived in since 1972 when their children were grown and gone. That was 20 years ago. “We were early with the downsizing,” the wife says with a laugh.

But they retained an acre of prime property next to their former home “for future consideration.” When that future arrived and included seven grandchildren, they began to think about building a home for this new stage in life.
“The grandchildren were getting big and we were living in a small house. We had to rendezvous outside of the house in order to all be together,” she says.

Their good friend happened to be architect Luke Desmone, founding partner of the architectural firm Desmone. Discussions took place over the course of several years and a concept began to crystallize. “We needed more space. Not more rooms, more space so we could be together in a less formal setting than our previous homes,” the wife says.
Desmone had helped the couple with their other homes and knew the property well. The couple had only a few demands — they wanted one big room and lots of natural light. But when the wife mentioned she always wanted to have a barn, Desmone gave her one better.


“An urban farmhouse. That’s how I pictured it,” says Desmone.

“These are folks who spend a lot of time in the mountains. That attitude wasn’t foreign to them as I searched for some imagery and what would fit the neighborhood. You’ve got some very classic urban houses and some extremely contemporary houses that were done mid-century by well-known architects. I searched for a form that would not be swayed by either one and yet fit in.”

The site had elevation issues and was challenging, so the first step was to bring in landscape architect Elise Keely of E.K. Smith Designs to do some drawings on how to position the house on the land. The couple also didn’t want to interfere with the privacy of their neighbors, so no windows face north.

“It really fits snugly into that site, and that also adds to the character,” says Desmone. “It’s very unique, it’s almost rural with the topography and landscaping and the number of trees that developed over the years.”

While the grandchildren were delighted with the prospect of building a house, the couple’s children were apprehensive. At an age when many contemporaries were considering retirement communities, the couple decided to move ahead with a project that ultimately took three years.

“They questioned it themselves and we talked about it, but they wanted to build a house there,” says Desmone. “They said let’s make it as accessible as we can so we can stay as long as we want to. Rather than worry about the steps, are they big enough, I said let’s put the elevator in and you can stay here as long as you want. It’s big enough to hold a wheelchair.”

The doorways are oversized to allow easy passage, the garage has a ramp into the house, the faucets all operate with one knob “and all the televisions are big so you can see when you’re half blind!” jokes the wife.
Originally the outside terrace was to be sunken, but that made it non-handicap accessible so the plans were changed. Twelve sets of French doors, impressive at 10 feet tall, flank both sides of the house and lead directly to the terrace or covered porches, providing an almost seamless transition. “It’s like being outside but you’re inside,” says the husband. “You can look in any direction and it’s green.”

The exterior of the home was inspired by the clubhouse at Whistling Straits, the exclusive course that’s part of the American Club in Kohler, Wisconsin. “It had stone that I loved so we called on Mr. Kohler to find out where the quarry was. We brought the stone in from Wisconsin,” the husband says.

Desmone paired the white limestone with giant dark timbers from Seattle. The effect is reminiscent of a Swiss chalet, or the half-timbered towns in Normandy. Inside, the house is less rustic, with a floor plan that includes utility areas such as a bar on the periphery. A spacious entrance gallery that opens onto the terrace can be used for parties and closed off with pocket doors from the main living area. A large master bedroom suite and three smaller bedrooms are on the second floor, all traditionally decorated by interior designer Barbara Wright.

“The size of the house dictates what the proportions should be, particularly when working with an open plan, and the coffering adds to the formality and the feeling of graciousness,” notes Desmone.

That formality ends in the basement, a space that builder Murray Rust insisted was necessary given the site but one the couple didn’t think they needed. The solution was to turn the basement into a giant putting green, which has instilled a love of golf into the grandchildren and made it a favorite place to hang out.

Now that the home has had a chance to settle in, with the landscape maturing and the furnishing complete, the couple has come to truly appreciate all the advantages and ease of living there. For Desmone the house is just as special.

“I could not not give it everything I had,” he says. “I am personally thrilled with it. I saw this as a house for the ages. In one hundred years it will look as stately as it does now.”