Kendall O’Brien Landscape Architects renovated an existing terrace and designed the landscape and plantings around this Edgeworth home.

Drive up into the heights above Edgeworth and the topography creates all sorts of geographic nooks and crannies. This house sits on the crest of a hill, with sweeping views both directly below and far into the distance. A vintage 1950s mansion, as they were called back then and meant to be, it boasts classic lines and a rigid symmetry that gives a formal impression. 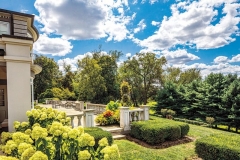 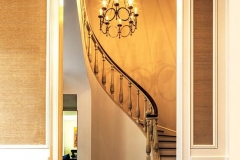 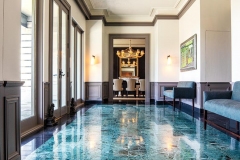 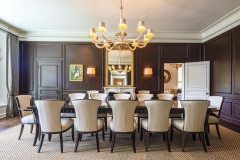 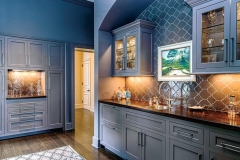 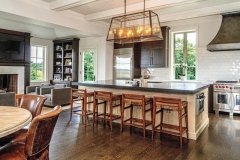 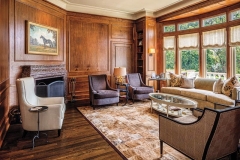 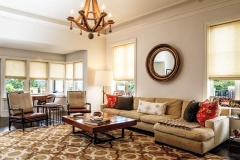 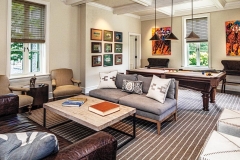 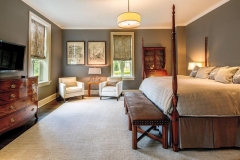 But the family that bought the home seven years ago is anything but. They lived about a mile away when they saw the house and became smitten with its charms.

“The natural light in the house is incredible,” says the wife, who oversaw a massive renovation and did most of the design herself. “Every room has so much natural light, the views are stunning, and we have incredible sunsets. I love the privacy, but still the proximity to the village.”

With experience renovating major homes for her family in Chattanooga and Chautauqua (“literally trial and error”), as well as helping friends with their projects, the wife was fully prepared for the job ahead.

“We did everything. We took it down to the studs,” she says. “We basically gutted the whole house and put in new HVAC, all new electric, windows, roof, copper gutters. The landscaping is 100 percent new—we took out some walls and redid the back patio.”

The owners brought in Don Beck, an architect from Cincinnati who specializes in the restoration of old homes. “He has an incredible eye for detail and space,” she says.

“The house has been stripped over the years. We added all of the original crown work back in the dining room and family room, and added beams and crown work in the kitchen. We also added the coffered ceilings in the game room.”

The second floor had seven bedrooms and three baths, but with three children, the owners reconfigured the space into four bedrooms with four baths. Another significant change was the kitchen, which originally had ceilings that were 9 feet tall—low compared to the rest of the house, where they are 12 feet plus. So the ceiling was raised to match, a wall was removed to open up the space and a fireplace and windows were added to create a cozy sitting area.

All the woodwork in the house, including the cabinetry in the kitchen, bar and bathrooms, was done by Ted Stevenson. The showpiece is the library, which Stevenson paneled in stained butternut wood.

“We intentionally don’t have a living room. When we entertain, we’re not formal. It was more important for me to have a big dining room where I could have 16 around a table than to have a huge living room full of furniture that was never used.”

The same thinking was applied outside. An enormous terrace wraps around the house and was re-lined with flagstone. Several seating areas welcome family and guests, and still there’s room for a crowd. The original iron railings were restored and new ones were added, along with stone balustrades. Kendall O’Brien Landscape Architects was brought in to design the surrounding acreage, and they began by removing an old pool and creating boxwood gardens. An exterior wall that blocked the view was removed, opening the house to the terraced lawns.

With the structural details in place—the whole project took less than one and a half years with Steve Scherer as the contractor—the wife worked with Maggie Kopf of Square One Interiors on the finishes and furnishings.

“I wanted it to be contemporary but also traditional. I didn’t want to compromise the tradition of the house—all the bathrooms are traditional marble. I wanted to make sure not to follow any trends or do anything that could be dated. I wanted clean lines, and for the house to not feel overly decorated. The house has very few window treatments—the beauty of the light and the surroundings is what makes the house. I didn’t want to clutter it up.”

The wife loves warm grays and worked from that palette, with colors ranging from pale gray to mink, a deep, gray brown in the dining room. “I think they have a little bit of a wow factor without taking over,” she says of her choices.

“We’ve done several homes and just have a passion for it. I’m most proud of how we took a very formal and stately house and made it very livable for a family, cozy and warm. My husband and children love it.”