The sunken living room designed by Denham Vitalie has a new marble fireplace, quarter-sawn oak flooring from Carlisle and custom furniture. The alpaca bouclé rugs are by Holland & Sherry and the Swarovski crystal light fixtures were handmade.

Back when his parents built the Fox Chapel home he now owns, it was called modern. And modern it was in 1955, when architects Derek Martin and Grant Curry designed the sprawling, boxy residence. 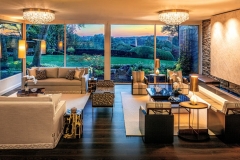 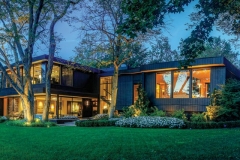 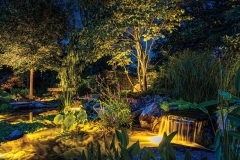 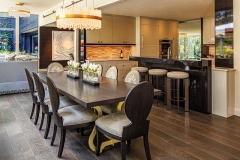 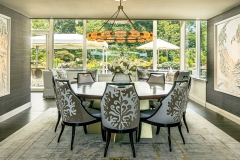 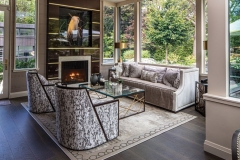 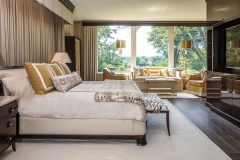 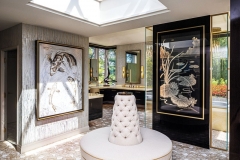 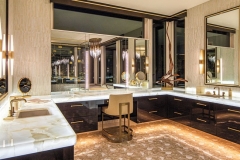 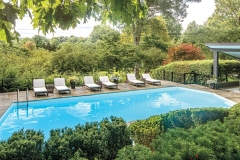 “My parents were devotees of Frank Lloyd Wright. They loved his style and wanted to do something different. At the time it was built, people frowned on it,” the husband says with a laugh. “It was just my mother’s taste. She thought it was neat. All the furniture was Swedish modern, the floors were terrazzo, there were diamond shapes on the walls, turquoise.”

The home as it looks today elicits a very different reaction. Its transformation from the dark, low-ceilinged house he moved into at age 13 to the stunner that stands in its place has been dramatic. But it took 17 projects over the course of 35 years to create the extraordinary residence. And one gets the feeling more might be in store for the couple who enjoy what most people consider a headache—renovation and construction.

They purchased the house from his parents in 1980 to be closer to their children’s school. The husband didn’t want to move—they already had a beautiful home and his parents’ was not.

“It was like Dr. Zhivago,” says the wife. “The windows froze over in the winter. It needed a lot of TLC. But we are project junkies. We both love to design. When one of us has a great idea in the middle of the night we turn on the lights and discuss it. We have one rule: if our partner doesn’t like it, it doesn’t get done.”

The early projects concentrated on getting the house livable. That required replacing the roof and windows, as well as new plumbing and HVAC. In 1985 the couple began structural work to enlarge the footprint and reconfigure the use of space. They own a home in Palm Desert and they came to love the open, airy California floor plans and the access to outside views. Soon they were raising the roof, literally, to increase ceiling height, and pushing out walls to expand the dining room and kitchen area.

“We didn’t do the decorating, the fun things,” notes the wife. “It was hand-me-downs from different houses. It wasn’t modern furniture, and it didn’t have any particular style. It was a hard house for us to decorate—we needed professional help. We finally learned if you want to do it right you have to do it all at once. We gave everything away and started over.”

Enter Patrick Denham and Dan Vitalie of Denham-Vitalie Design. The couple brought them in almost three years ago to design both the interiors and the landscaping. It was especially important to create vistas from all the windows, to bring the outside in. Vitalie served as project manager, overseeing the contractors and subs in addition to designing the landscaping. Denham handled the interior design, furnishings (including many custom designs), soft goods and finishes.

“We had started to make major internal changes to the house ourselves and did most of the design concept,” says the husband. “We opened up a lot of walls so when we saw Dan and Patrick we explained what we wanted to do. The concepts they discussed seemed to fit. If you did this and that it would look like it was originally designed that way.”

The work was extensive and began with all new lighting. The flooring throughout was replaced with Carlisle quarter-sawn oak, except where the existing Pennsylvania bluestone was matched in the hall. All the bathrooms were renovated and the master was enlarged and outfitted with under-lit onyx countertops and a seamless quartzite floor that took three months to install. The media room was upgraded with custom cabinetry and a surround sound system. A sitting room addition was built onto the master bedroom. And the living room gained a new fireplace wall and generous steps where a railing once blocked the way.

“The biggest design challenge was to convert a traditional interior into a Mid-Century Modern style,” says Vitalie. “We felt the home needed to be reborn in the architectural style that was intended. We wanted a feeling throughout the home of modern, serene bliss.”

Outside, Vitalie designed a waterfall and koi pond at eye level to be enjoyed from the new flagstone patios. Additional hardscapes and retaining walls gave form to the exterior spaces, and new trees, plantings and lighting were added. An outside kitchen was tucked next to the four-car garage that houses the husband’s vintage car collection.

“For any good design you have to be able to see a project finished in your head,” says Vitalie. “That’s a strength Pat and I share. We’re both extremely detail oriented. We influence our clients to consider the architecture, to coordinate the exterior of a home with the interior. The exterior can sometimes look traditional and dated so it helps the overall design aesthetics to have the exterior work with the interior.”

Next on the project list is a new pool and pool house. Suffice it to say the home is a far cry from what the husband jokingly calls “the Motel 6” it once was. “It has a feeling of quiet elegance it didn’t have before,” he says. “The inside-outside look is something we love.”

“We have to give the entire credit to Dan and Patrick,” adds the wife. “We wanted to feel like we were in nature. Seeing the animals, the deer, the squirrels—it’s very peaceful and tranquil. People walk in and seem to feel so relaxed here.”