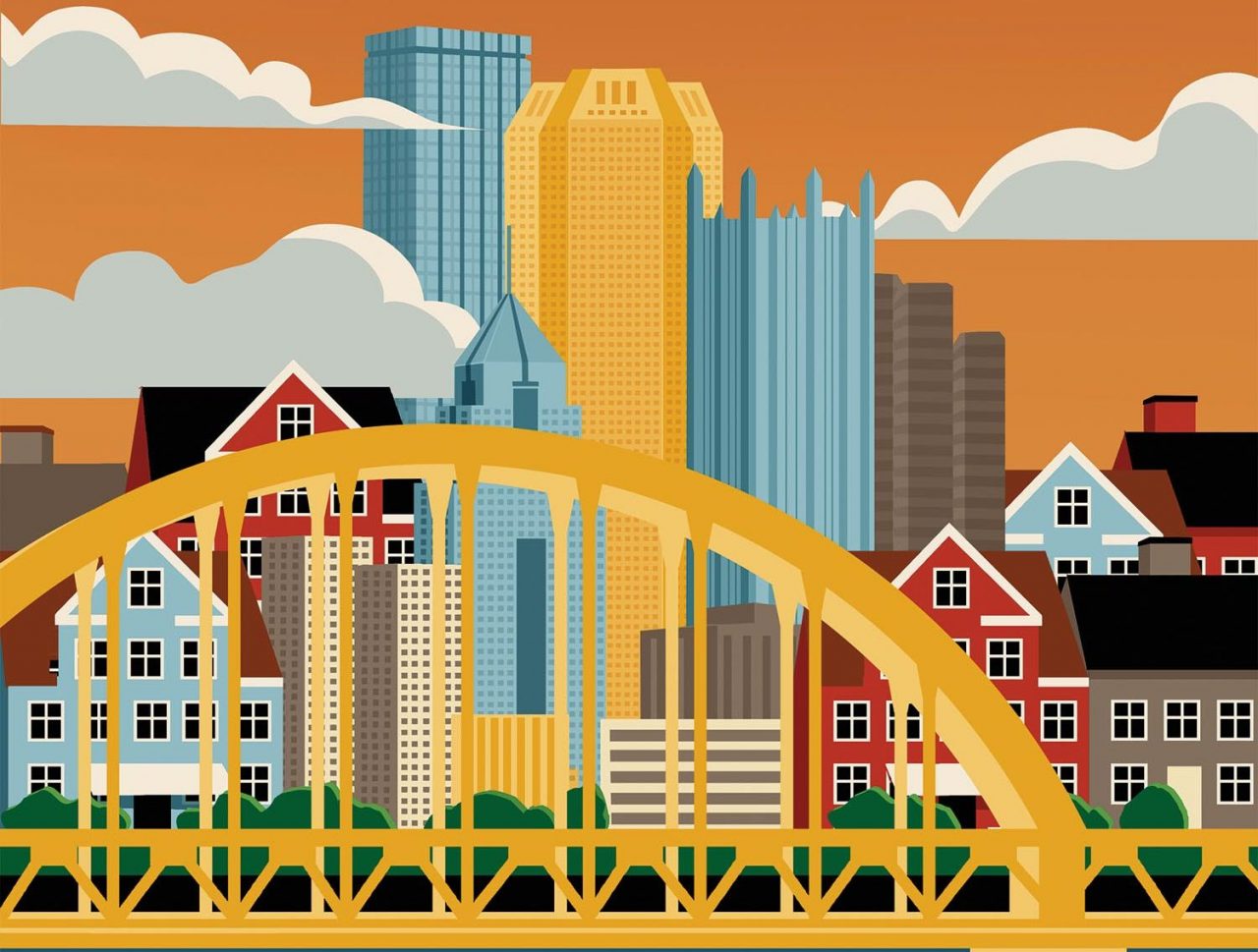 The Pittsburgh metropolitan statistical area’s economy enters 2022 in much the same condition as it exhibited prior to the pandemic. That is, growing, but doing so at a pace below the national average and under the yoke of subpar labor market conditions. Even though the bar has been lowered as to what economic growth targets should or can be as the economy continues to recover from the pandemic-induced recession of 2020, Pittsburgh cannot escape the context of underperforming national and regional trends, whatever the standard might be.

Pittsburgh’s job market is working on a recovery from the losses endured in 2020, but it lacks several key resources necessary to power its efforts. At the end of 2021, Pittsburgh employment stood 5.5 percent below pre-pandemic levels, compared with national employment which was just 2.5 percent below the February 2020 level.

Limiting Pittsburgh’s ability to recreate jobs is a sagging labor force. After plateauing briefly in mid-2021, the number of Pittsburgh metropolitan statistical area individuals either employed or actively looking for work fell steadily through the second half of 2021. Pittsburgh’s labor force has not been at this level since 1991 — at which time the labor force was, in fact, dramatically rising. This measure of workforce availability is now down by 6.6 percent from the peak it saw in late 2008, prior to the 2008-2009 recession taking hold.

Pittsburgh employers hoping to add to their payrolls in 2022 will face extraordinarily difficult conditions, as workers are in short supply. Unfortunately, this is not simply an echo of the nationwide labor shortage that has garnered so much attention during the past year. Pittsburgh’s labor force has been trending downward ever since reaching that 2008 peak, and Pittsburgh’s labor force woes seem only to have been accelerated by the effects of the pandemic.

Labor shortages have encouraged wage growth throughout the U.S. as businesses vie for a limited number of workers and bid up wages in response. Pittsburgh’s economy has made a push to align with national conditions in this respect. Average hourly earnings in Pittsburgh across all private businesses increased by 3.8 percent through late 2021, as compared to 4.3 percent for the U.S. and 4.8 percent for the state of Pennsylvania as a whole.

Leisure & Hospitality industry jobs are some of those seeing the strongest wage gains across the country. Workers in these positions often make up the lowest tiers of the pay scale, but they are now demanding higher wages in order to re-staff these customer-facing, high-traffic roles. Pittsburgh’s Leisure & Hospitality sector saw job growth of more than 10 percent year-over-year to close out 2021. This has combined with the overall wage growth trend to boost income gains in the metropolitan statistical area.

While Pittsburgh’s plummeting labor force will make hiring increasingly difficult for businesses in 2022, those workers who do take positions in the coming year will find themselves with improved financial prospects versus pre-pandemic expectations.

Regardless of labor force status — whether having retained a job throughout the pandemic, finding a new position in the new year, or having the means to remain on the job market sidelines — inflation will affect households in the Pittsburgh metropolitan statistical area in 2022, just as will be the case across the U.S. Consumer prices will continue to rise at the fastest pace seen since the nation’s bout with hyperinflation in the late 1970s and early 1980s. Workers will be able to continue to push for higher wages across industries as the labor force participation rate is not scheduled to return to pre-pandemic levels, even after “full employment” has been reached.

Resolutions to repair supply chain disruptions will also face an uphill battle, leaving businesses with dual pressures ­— labor and input price increases — fueling a rise in the prices they charge customers. Although Pittsburgh is often touted as a relatively low-cost economy for households and businesses alike, that designation does not provide cover from the nationwide onslaught of a rapidly rising cost of living and doing business. And even as inflation is expected to slow throughout 2022, estimates are that price growth will still be north of 3 percent by the end of this year. This is well above the Federal Reserve’s target of 2 percent and implies that, in addition to higher prices for goods and services, the cost of borrowing for consumers and businesses will be marching higher as monetary policy tightens in response — i.e, higher interest rates. Though consumer demand showed little sign of dampening on its own in 2021, 2022 brings the prospect of a heavy-handed assault on both the ability and willingness of consumers to fuel anything better than moderate economic growth through spending.

Delving into Pittsburgh’s industry-by-industry trends for the coming year, the local economy’s largest sectors present a mixed bag in terms of seizing the mantle of leadership. By far the largest employer in the Pittsburgh metropolitan statistical area — accounting for almost one-fourth of all jobs in the economy (22 percent) — Education & Healthcare Services saw hiring slow into the final months of 2021. Jobs in this sector actually declined by an average of 3.1 percent from August through November (the most recent data available), whereas such jobs grew by 1.7 percent over the same time frame in the U.S.

Again, the result is a microcosm of Pittsburgh’s broader performance in recent years, rather than an isolated, pandemic-induced instance. Pittsburgh’s Education & Healthcare Services sector has consistently ranked in the bottom one-third of metropolitan statistical areas across the U.S. in terms of payroll growth over the past decade. Employment growth in Financial Services (-8.0 percent), Transportation & Utilities (-5.6 percent), and Government (-0.1 percent) offer further examples of influential sectors in Pittsburgh that closed out last year in decline. Without its largest and most integral industries driving job creation, Pittsburgh will struggle to generate its own economic momentum toward overcoming the broader hurdles it faces alongside the rest of the nation.

Professional & Business Services, on the other hand, began an uptrend to close out 2021. This second largest segment of Pittsburgh’s job market (16 percent of the total) represents a large proportion of workers who likely were able to continue working throughout the past two years of remote working. The persistence of caution and confusion regarding a return to on-location work arrangements has the potential to keep this sector on the ascent as more businesses determine ways of employing work-from-home arrangements for their staff. Such efforts are likely to fuel demand for information technology services, legal and accounting needs, and other back-office operations that comprise the Professional & Business Services industry.

Leisure & Hospitality Services, another large segment of Pittsburgh’s job market (9 percent of the total), sits in the crosshairs of advancing work-from-home sentiment, however. If fewer workers make the daily trek into local office and commerce centers, demand for leisure and hospitality workers will be dented, setting what was a healthy 8 percent growth pace of job growth in August through November of 2021 as a high-water mark in Pittsburgh’s post-pandemic recovery efforts. Of course, omicron and possible other covid variants are hurting travel, especially business travel, in Pittsburgh and nationwide.

In summary, Pittsburgh’s economy is on track to grow only slowly in 2022, and certainly at a pace below the national average. Structural labor market issues persist in the local economy, limiting the potential for a locally induced spark to propel Pittsburgh over the potholes faced by the nation as a whole.

Federal fiscal stimulus policies have likely run their course, and monetary policy will begin a battle against inflation that will dampen growth prospects locally and across the U.S. In short, there are few routes available for Pittsburgh’s economy to surprise to the upside. A simple resumption of stable growth across the metropolitan statistical area in 2022 may be worth striving for as a best-case outcome.
Categories: Pittsburgh Today Regional News
Tags:

Stuart Hoffman and Kurt Rankin are, respectively, senior economic advisor, and VP and economist, for the PNC Financial Services Group.