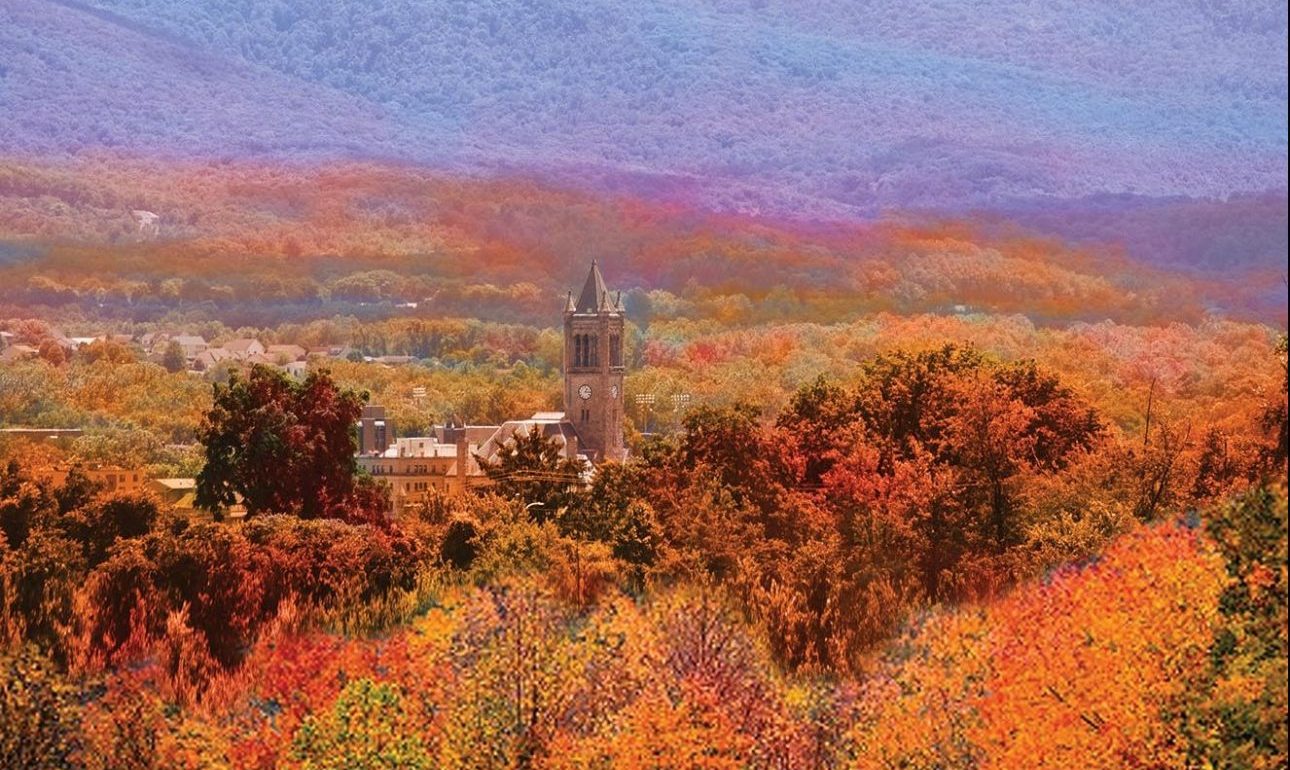 Snowbound residents of Pittsburgh’s hilly neighborhoods may not share this view, but part of the appeal of being a Western Pennsylvanian is that our natural geography still imposes influence on daily life. Not all regions enjoy, or endure, that dash of topographic spice, but it’s inescapable on my travels over and atop Summit Mountain, looming eastward above Uniontown in Fayette County.

As you ascend the Summit on Route 40, glances at your car’s thermometer will affirm that it’s reliably 6 to 8 degrees cooler at the top than in town. Even an older vehicle and your own body will register the change. The windshield will fog halfway up, and your ears will “pop” in response to dwindling atmospheric pressure. Those degrees that ticked away on the climb are a summer delight, but in winter the temperature range is often greater. Snow can fall on the crest when rain is dimpling puddles on Uniontown streets. And once snow falls up there it crusts and lingers, a tier of white soaring above sere lowlands, hinting of more dramatic topography in alpine places.

Truckers and parents of school-age youngsters pay closest attention to the Summit’s weather. Trailer rigs caught in a mountain squall paw to a standstill just short of the crest, blocking the way for more winter-nimble units, or slide and jackknife on descent. “I hope I can get back over the mountain before it snows,” is a common seasonal mantra among residents of Chalk Hill and Farmington who work in Uniontown. Snow days in the Uniontown Area School District are a “tail-wags-the-dog” affair, governed by conditions on the Summit, even though the three mountain townships that make up 80 percent of the district’s land area account for just 26 percent of its population.

Some of the mountain’s moods are less benign than a two-hour school delay. Planes have crashed in the fog that envelops the skyline knobs. The murky fog can brew in winter or summer, and when it obscures the Summit, it’s not unheard of to encounter drivers who lost their orientation on the crest and then headed down in the up-bound lane, on the wrong side of the barrier, their lights emerging from the vapor ahead at the last avoidable moment.

Even clear skies merit caution. Route 40 boasts two lanes heading east and west on the mountain’s flanks. So, in good weather, crossing takes just minutes. But both the eastbound and westbound two-lanes taper to one just below the top, bottlenecking traffic over the crest. Aggressive drivers don’t like the slowdown, but it saves lives. At the Summit’s crown, Route 40 traffic comes up suddenly on opposing intersections, one heading north and one south, where the steep grade renders sight-distance nil. Building passing lanes across the top would be deadly.

Through the 1960s, a broad sign stood at the Summit on Route 40’s westbound berm: “WARNING: 3 PEOPLE KILLED BY RUNAWAY TRUCKS SINCE 1960.” At some point, the Pennsylvania Department of Highways (now PennDOT) crossed out the “3” with an X and placed an adjacent “4” on the same panel. The sign is long gone, and the runaway truck ramp halfway down has largely stemmed the threat. But when ascending from the east, overhead signs still warn of the imminent westward plunge — “DANGEROUS MOUNTAIN AHEAD” — lending adventure to routine commutes.

If you have never crossed the Summit, don’t imagine it as a stand-alone peak. It is a summit only in the context that it’s where Route 40 (The National Road) scales Chestnut Ridge. At the westernmost flank of the Allegheny Mountains, the ridge slants northeast-to-southwest from a point east of Indiana, Pa., to about Grafton, W.Va., where it peters out into a plateau. Our contemporary ridge is what remains of the western ramparts of a much higher Appalachian system heaved upward when continental land masses collided 300 million years ago.

Today’s heavily wooded ridge is 2,000-2,800 feet above sea level, and 1,200-1,500 feet above the rumpled basin to its west. Where Route 40 tops Chestnut Ridge, the Summit stands at 2,418 feet above the seas. The only gaps in its 100-mile span are at Blairsville, Latrobe, Connellsville, and Morgantown, where the Conemaugh River, Loyalhanna Creek, Youghiogheny, and Cheat rivers, respectively, cleave the ridge. Looking west along the Summit’s latitude, no more mountains rise until Colorado.

One of the best places to view Chestnut Ridge is from the parking lot of Uniontown’s Target store. Nearly the entire breadth of the ridge, south to north, spreads out before your eyes. It’s an amazing geographic spectacle in a region attuned to more intimate views among wooded hills, and you wonder why the city of Uniontown has never capitalized on this prominent feature in its branding. We sometimes fail to “see” our natural landscapes, focusing only on what can be made or wrested from them.

And there is much to see on the ridge at different times of the day and year. In early morning, with the sun rising behind it, the ridge presents as a dark wall, a featureless monolith. That carries its own allure as stark division between settled terrain and wilder reaches, reinforced for me by mountain encounters with rattlesnakes and bears.

In the evening, especially in winter when the sun arcs farther south, the light strikes low and oblique along the ridge’s flank, incarnating its relief across that entire expanse — ravines and hollows, folds and off-shot fingers, outcrops and crags. Then, you can sense the subtle but relentless work of weathering across an unfathomable gulf of time.

November sunsets, when oak leaves still cling, are lovely, melancholic, and fleeting. From the moment you first notice a plum tint, through deepening climax, to the quiet bleed into umber, you’ll heave only a handful of breaths. But these are awestruck breaths, snatched while wondering what blend of tangential ray, aspect, bark, rock, and weathered leaf can strike the eye with purple light.

More enduring than November purple is the pale green of spring, with its chance to witness deciduous renewal climbing the mountain’s face. Green appears first in the sheltered hollows. From there it oozes upward, tentative at the advancing fringe. Once the green creeps out of the coves, it vaults up the open slopes, racing toward the crest until, weeks after its birth below, new green erupts atop the ridgeline. Sometimes, during this progression, a spring snowfall caps the green advance with a white mantle across the crest. If afternoon sun accents the contrast, the visual impact can lure traffic on parallel Route 43 to the shoulder.


Change reverses direction in autumn. A coppery tint flares first at the top, then flows downward as it kaleidoscopes to scarlet, yellow, and orange. There are always outliers, though, scattered trees that enflame at random, outside the advance, obedient to some internal code.

Seasonal transition presents a primer in woodland ecology — why various trees occupy the places they do. Those bright greens of spring, and the butter yellows of autumn, showing in the same sheltered hollows, are the foliage of tulip poplar (not a true botanical poplar, but a magnolia). Poplar needs the deeper, richer soil that collects in coves.

Dark green blotches tucked into those coves are hemlock, which clusters along streams that drain the slopes. Hemlock doesn’t show seasonal change, but it stands out in winter when hardwoods are bare. Leathery swaths along the spine and across the sidehills indicate oaks, which favor drier soils. “Benches” and terraces anchor smears of burnished coppery-gold, the persistent leaves of American beech. Beech holds its wizened foliage long toward winter and does best on “flats” where soil is deeper but not too moist. Most rare, and impossible to detect in summer, are the wispy, gray-green bands of Virginia pine and pitch pine. These pines cling to the poorest, driest, most exposed and wind-battered ledges shunned by other trees. Seen up close, rooted to their outcrops, pines here convey a sense of desolate wildness, less familiar than bucolic woodlots below.

A dark irony is that the one tree missing is the one that gave the ridge its name — the American chestnut. Our native chestnut was extravagantly abundant throughout Appalachia, useful and fruitful, when the region was settled. Western Pennsylvania was the heart of its range. But American chestnut succumbed to an invasive fungal blight, imported on Asian chestnut transplants. Beginning around 1900, every chestnut from Alabama to New England died within three decades. Several oak species have assumed the niche that chestnut filled in our uplands, but the chestnut blight is widely considered the most tragic ecological calamity ever to befall North America.

Poignant lore recalls the chestnut’s dominance on the ridge. From early childhood, I remember the sadness in the voices of my normally flinty elders, telling of shoveling up wagonloads of chestnut burrs, crammed with sweet, nutritious nuts, as the blight drew near. Long before that, settlers plodding west over the Alleghenies on a trail that became The National Road and then Route 40 thought they saw snow atop the last, westernmost crest in June. Days later, when they’d reached those heights, they gaped under a vast canopy of American chestnut’s white-catkin flowers.
The antagonists never noted them in their journals, but the chestnuts were there when this summit hosted bloody history that shaped the politics and national boundaries of our world today. Just north of where Route 40 crowns Chestnut Ridge, British colonial officer George Washington and his native guide Half King skirmished in May 1754 with a small, surprised, party of French and Canadians led by Ensign Coulon de Jumonville. Accounts of the clash conflict, depending on which side wrote them, but Jumonville’s grisly death there sparked the French and Indian War by which England, after a series of defeats, won control of the contested Forks of the Ohio and colonial dominance in America. One year later, British General Edward Braddock’s army marched west and north over the same high ground on its way to disaster on the Monongahela, where Braddock, Pa. stands today.

Except for the absence of one great tree and away from roads, the ridgetop appears much as it must have to Washington and Jumonville. Sandstone boulders dominate, some big as houses, with girths of jumbled talus around their base. Overhung thickets of rhododendron and mountain laurel soften their ruggedness for the eye, but not the foot. The timber seen from below strives upward among the rocks.

Most notable, if you venture far enough from the roar and hum of Route 40’s corridor, is the quiet. Normally, we are immersed in noise, and as we move away from noise, its ambience clings. So, the quiet is not obvious when it first assumes primacy. But, at some moment, quiet will enfold your attention, “louder” in its own way than accustomed clamor. Atop the ridge your ears are above all noise, except the wind. The wind is not noise; it is sound, and so belongs.

On a clear day on the ridgetop, especially in autumn, you can see Downtown Pittsburgh between gaps in the timber. Its crisp silhouette on the northwestern horizon juts from an ocean of wandering hills, settling into prairie and plain. pq
Ben Moyer writes about nature, outdoors, and natural resource issues from his home in western Pennsylvania’s Laurel Highlands.

Enjoy Hiking the Improved Trails in the Laurel Highlands