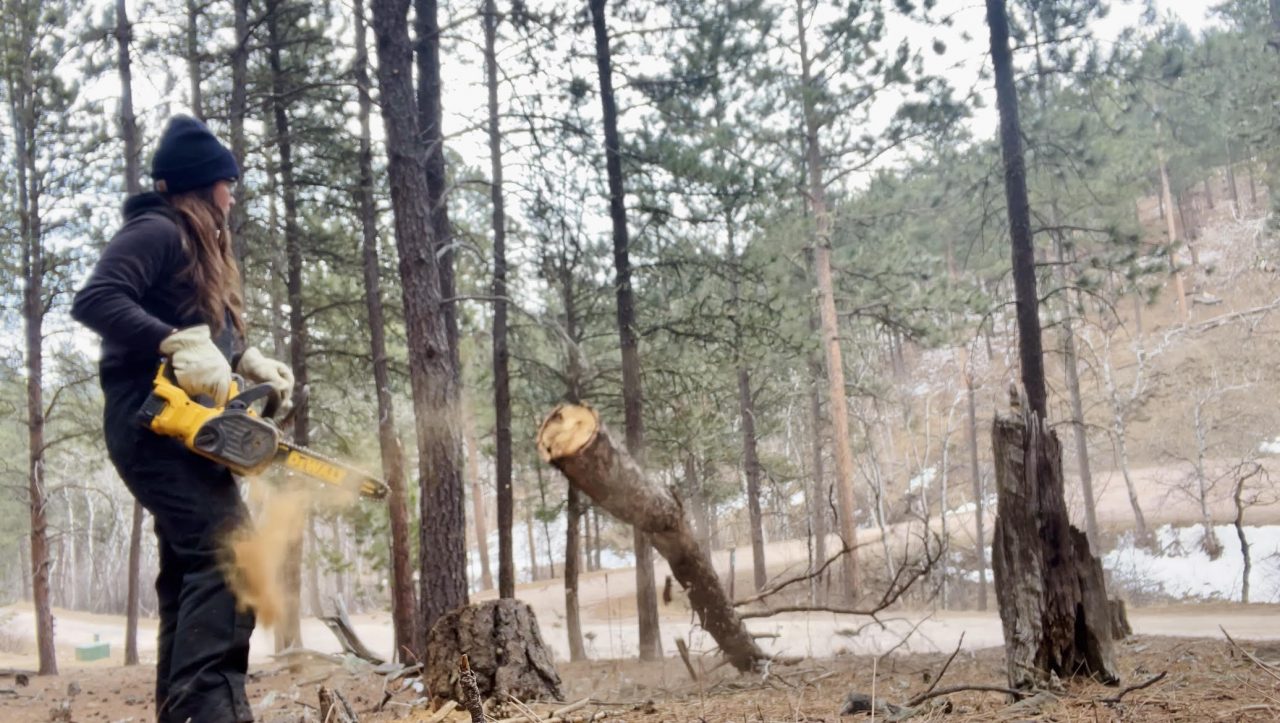 All Photos by Kate Benz

I need to get the chains from our chainsaws resharpened, but there’s a line at Lloyd’s counter. June is standing in front of me, a gas-powered, STIHL MS 251 CB-E with the 20” bar in her hand. June is 80 years old. Thin as a rail. Her back curves like an S, she kinda leans rather than stands, and there’s a faded tattoo on her upper ear. Her skin is tanned golden even though winter made its exodus a mere two weeks ago. “She goes out into the forest and cuts wood every day,” chuckles Lloyd. “She’s an old hippie. Full of spit and vinegar.”

I’ve got a chiropractor appointment in an hour thanks to a marathon of cutting that began with some dead trees on our property and two massive, white spruces that had snapped during the spring blizzard that the weatherman on KOTA-TV warned us about. Replenishing the woodpile is always a priority. If this year’s woodpile is looking good, then it’s time to start next year’s woodpile. Good, dry, seasoned wood burns hot and fast. Wood that hasn’t been properly dried and seasoned just smolders like a lazy cigarette. And the best way to get good, dry, seasoned wood is to cut it, chunk it, split it, and stack it so it can bake in the sun. The longer, the better.

My husband taught me how to cut trees that had fallen to the ground, but I had never cut a standing, dead tree before. I should say felled. Felled is the proper terminology according to the wise, chainsaw-wielding souls who have gone before me. The dead trees I am eyeing are pretty small. Maybe ten to twelve inches in diameter. They must have snapped ages ago thanks to a windstorm or a snow storm or an ice storm: whatever storm that howled its way through the pines that blanket the Black Hills.

I throw an old FFA beanie onto my head and pull on my Carhartt overalls, washed yesterday and already covered in sawdust. I grab two batteries for my DeWalt, half the size of June’s chainsaw, along with the chainsaw oil. “Re-oil every time you change the battery,” my hubs advised. “Otherwise, you’ll burn up the motor.”

It’s an overcast day. I set my chainsaw down on the ground and put on the least-offensive-looking safety glasses I could find and some gloves.

The dead trees stand on a hill towards the lower end of our property. Luckily, I remembered enough from physics class to know to stand behind the tree, not in front of it. The first one I’m going to cut is a spindly little gray twig that’s about twelve feet tall and five inches in diameter. It looks like it’s got a bad case of scoliosis. I pop a 6-amp battery into the DeWALT and bend low to the ground.

Rrrrrrreeeeeeeeeee. Within seconds, the tree begins to pitch forward, slowly falling to the ground a low, hollow, unimpressively weak thump.

The next tree has more girth. Now we’re talking. Ten or so inches in diameter; maybe twenty feet tall. It feels thick. I’m about to put my blade to it when I see something out of the corner of my eye. Wild turkeys. Just two of the usual seven that come by daily to scratch the dirt under the birdfeeder for discarded sunflower seeds. They cluck and gobble, unimpressed with the whir of my battery-operated chainsaw. Rrrrrrreeeeeeeeeeee.

The blade chews its way through most of the stump when I see gravity starting to take over. I place my hand against the bark and nudge its descent back to earth. “Timber!” I yell as it crashes to the ground with a satisfying crescendo of snapping branches. For the next ten minutes, I contort and bend and twist to cut off all the dead branches before cutting the fallen tree into smaller chunks that I will chuck into the back of the truck. They are surprisingly heavy, given how dead this tree is, and it’s a long walk to the truck when you’re lugging two chunks over uneven terrain.

I bring two more dead trees to the ground. Chuck one chunk after another into the back of the truck to be split and stacked later. My back hurts. My knees hurt. My neck hurts. My hands hurt. Everything hurts. I can tell I need a break because I’m starting to get mad at the woodpile.

Stupid woodpile! Having a good hair day? Gotta cut wood for the woodpile. Wanna have a date night with your husband? Gotta cut wood for the woodpile. Woodpile, woodpile… always, the woodpile! But despite my irritation with the woodpile, the ibuprofen, ice pack, heating pad, and chiropractor I’ll need later, I know I will be oddly drawn back to this intense, physical labor that has become part of our lives. The bend, kneel, cut, pull, stoop, cut, chunk, tote, heave. By the time I take our chains to Lloyd to be resharpened a few days later, I’m already starting to miss tending to our woodpiles.

I also think about June, somewhere out there in the National Forest, a gas-powered, STIHL MS 251 CB-E chainsaw in her hand, her back curved like an S. I think about her a lot, actually. I used to aspire to own a big, walk-in closet and a lot of shoes. Now I just hope I’m as cool as June when I’m eighty.