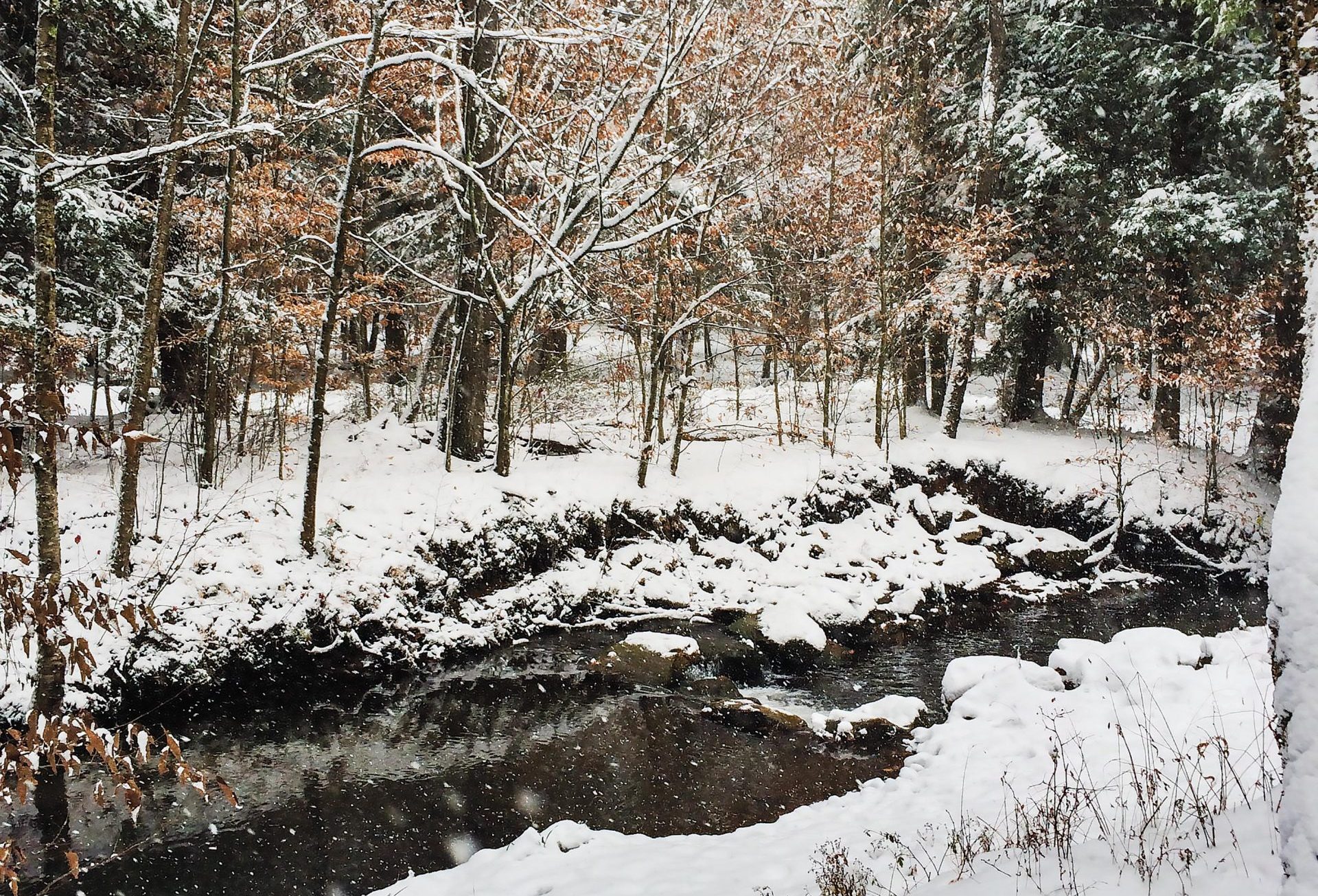 I had seen the stream many times before, in my dreams. As someone averse to synthetic sleep aids, I’ve always relied instead on my mind to take me to one of my happy places: a rugged and undeveloped coastline with soaring seagulls and salty air; my grandmother’s kitchen table; a sweet stream flowing through the trees and across a green meadow, its surface dimpled with a few concentric rings made by trout feeding on emerging mayflies, the sounds of its current spilling downstream the only music I need, the only music I need…to lull me to sleep.

It was quiet and cold the night my wife and I arrived at the Lodge at Glendorn near Bradford. We’d driven in from Ohio where we’d been visiting my son, who is attending school at Otterbein University, attracted by the prospect of a few days at an elegant, old-fashioned sporting estate. The desk clerk presented us with a set of keys to the Miller Cabin, which dates from the 1920s and is the oldest dwelling on the property. We were charmed by its chestnut interior paneling and seemingly original fixtures. Situated on the banks of Fuller Brook, a cool, clear stream flowing out of the Allegheny National Forest and winding through the Glendorn property, falling asleep that first night was easy.

When we awoke early the next morning, a blanket of snow, four inches thick, covered the woods and grounds throughout the property. A squirrel darted from the edge of the creek to a lofty hemlock nearby, leaving a trail of tiny tracks in the snow. I listened to the current rushing along in the stream as I made coffee. Then I sat down at the kitchen table and, delighting in the sight of all this snow, mentally inspected the inventory of cold-weather gear I’d packed for this trip. Today I had plans to immerse myself in the picturesque scene before me. I was going fly fishing.

An hour later, after breakfast, I met Charles, my guide. He was eager, energetic, and evidently elated to have a reason to suit up in his waders on this cold, overcast day. Young and affable, he reminded me of my brother, Matt. I liked him already.

We began the day at one of Glendorn’s small lakes. Charles stopped his Jeep. Suited up in our waders, coats, gloves, and hats, we slid down the bank to the water’s edge to make a few casts. In hindsight, he just wanted to gauge my casting ability, but I savored the opportunity to fish this lake, especially when Charles told me it held some very large trout. Casting a spun deer-hair fly, I soon hooked a fish of considerable weight and power. It dove down into the deep and shook its head, bending the tip of my fly rod nearly to the cork handle. After a minute or so I had the fish close and Charles netted it. It was one of the largest brown trout I’d ever caught, and beautiful with its golden-orange belly and spotted flanks. Charles snapped a cell-phone photo and we released the fish. Already, my day was a success and I hadn’t even reached the stream back in the trees that so enamored me.

Our first stop on Fuller Brook was at a small pool where the current slowed and circulated in a wide, concentric sweep before gathering strength and funneling into a run just downstream. We were near a small walking bridge, in the shade of which Charles directed me to cast my dry fly. I missed my mark on the first cast. My drift was off. Then, regaining my line, I made another shot toward the bridge. Three seconds after landing on the surface, my fly disappeared in an aggressive splash. My line tightened and the fly rod came alive, suddenly electric with energy.

The result was a healthy rainbow trout with a dark olive back and vibrant pink flanks. Like the sight of snowflakes falling through the forest, the pristine blanket of white on the ground, and the deer moving along a ridge across the creek, the trout was beautiful. It was also a glimmering reminder of why I fly fish: because the sport takes us to our planet’s most beautiful places and presents us living evidence that our conservation efforts are working.

We released the fish and moved to a new spot on the creek. I delighted in the sounds of the forest: the stream flowing, a woodpecker hammering away at a distant tree, the soft, squeaking noise of snow crunching beneath our boots as we approached the brook.

Nearly every pool or run we fished produced a trout, and sometimes two or three. Charles told me that Glendorn works to maintain the integrity of Fuller Brook by doing a habitat-improvement project every year. He pointed to the riprap rocks along the bend we were now fishing. They’d been added the previous year in order to stabilize the stream bank, especially during times of high water.

“Make a cast as close to the rocks as you can,” Charles directed. “The water here is deep and the trout love to hide right on the edge where they can watch for food flowing past.”

I made a cast. It was a few inches off. Nothing. I fired again, bumped a rock with my fly and then watched as the current swept it downstream. Soon there came a splash and the fly was gone. The little four-weight rod came alive. I was tight to another trout, a rainbow.

The snow had continued falling that morning and seeing it descend among the hemlocks and pines, and accumulate on the ground already blanketed in white was, for me, a treat. The rest of the world seemed a thousand miles away. This is the kind of day I’ll remember for a long time, I thought. We had the stream all to ourselves and I relished the opportunity to spend time exploring it in this quiet, peaceful season. Though this was my first time visiting Pennsylvania, I felt I already knew Fuller Brook, Glendorn’s picturesque signature stream. For I had fallen asleep to the sweeping sounds of its current, had watched the trout rise in its placid pools, had seen Mother Nature’s aquatic artistry all my life, it seemed. All I had to do was close my eyes in an effort to find sleep, and there it was, waiting for me.
Categories: Nature
Tags:

John Gifford is a photographer, writer, and conservationist based in Oklahoma City.

The Blackberry: The Humblest Jewel