The Fledgling Wren that Wouldn’t Budge 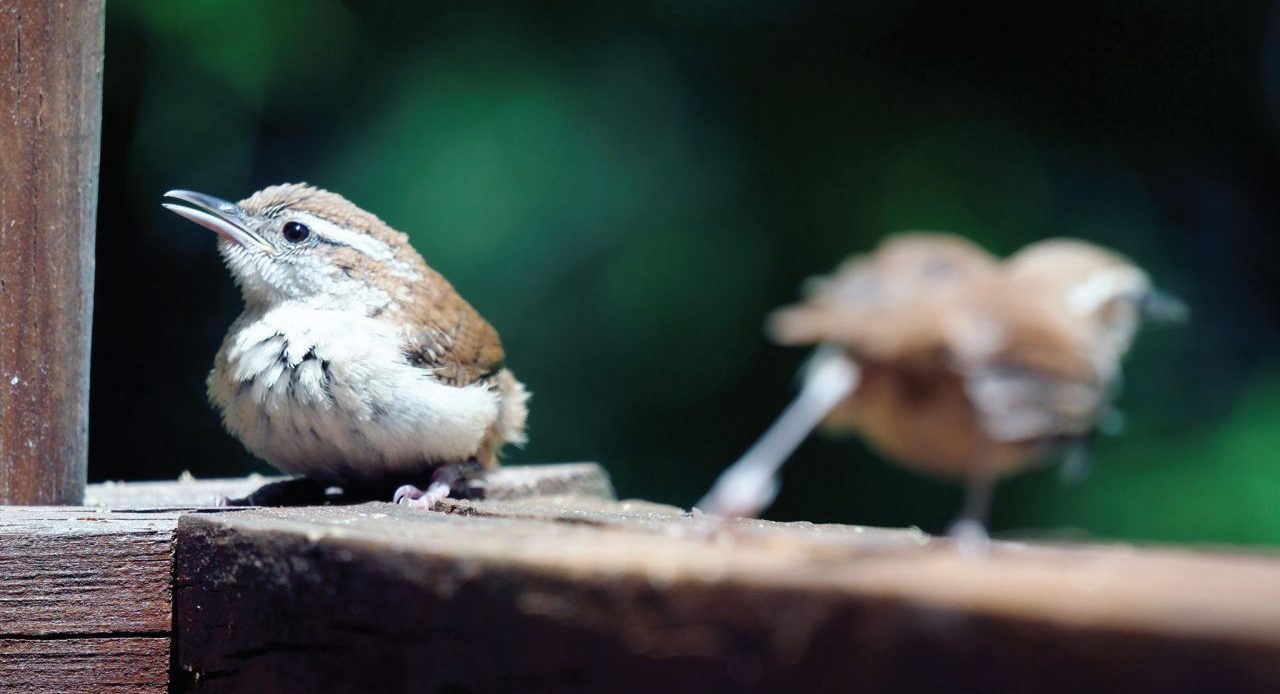 What must it feel like for a baby bird to fledge? To take a leap (of faith?) and fly for the first time? I couldn’t help but wonder one warm day when I watched a clutch of birds fly off our front porch.

I feared, however, that if I wrote about birds’ feelings, I’d be accused of anthropomorphizing bird behavior — until I read the Preface in What It’s Like to Be a Bird, by ornithologist and illustrator David Sibley.

“My growing sense as I worked on this book is that instinct must motivate a bird by feelings — of satisfaction, anxiety, pride, etc. … Maybe the feeling an oriole has when looking at its finished nest is similar to the feeling human parents get when we look at a newly painted and decorated nursery. Maybe a chickadee ‘sleeps well’ after a good day of gathering and storing food for the winter.”

So, I’ll venture to say that fledging was routine for three tiny, fuzzy-headed Carolina wrens, with their cinnamon feathers, white breasts, cocked tails, and eyebrow stripes as they emerged, one by one, from a birdhouse set atop our transom window. And I’d say it was downright terrifying for the fourth wren who really had no interest in flying at all.
I was below that transom, reading on a wicker couch, when suddenly adult wrens flitted wildly from lilac branch to flowerpot, window shutter to porch railing, pegboard to pillow, muck boots to thermometer, chirping what the American Bird Conservancy calls “harsh, scolding notes.” Was it Mom and Dad? Perhaps. The sexes have the similar plumage, but one bird was noticeably larger, presumably the male, common for Carolina wrens.

When our children were young, we built an Irish cottage birdhouse to raise money for Powdermill Nature Reserve. The birdhouse is made of round stones painted white, with a thatched roof, a red door, and red window trim. At the auction, Valley School’s art teacher, who’s married to an Irishman, bid on it, which pleased me, but unbeknownst to us, my father-in- law bid higher in order to return the birdhouse to the children. It rested on the transom ledge for years, unused by birds.

Carolina wrens don’t usually build nests in traditional birdhouses with small entrance holes, but instead in unlikely spots: hanging plants, mailboxes, tin cans, shirt pockets, shoes and hats. We’ve had wrens nest in a hanging lantern at our front entrance, a hay rack, and a wire basket that holds my husband’s horse brushes and sponges. That nest was funnel-shaped and elegantly woven with twigs, weed seeds, pine needles, moss, and decayed leaves. And who can’t love a species where the male builds what the Cornell Lab of Ornithology calls numerous “nest starts” — and then allows the female to choose her favorite? Bob Mulvihill, an ornithologist at the National Aviary in Pittsburgh, said our Irish cottage was “definitely funky enough to catch the eye of a Carolina wren.”

I watched the first baby wren come out of the birdhouse. It rested briefly on the hole and then took a 6-inch practice flight, straight up, and landed back on the shelf. The next two followed, all chattering away, and within five minutes, three wrens had crash-landed onto the couch, a side table, and the porch floor — with such thuds I couldn’t believe they survived. The adults continued to fly on and off the porch, indicating, I believe, which direction the little ones should follow — around the corner toward the euonymus bushes and a rose arbor. But instead, the babies hopped around the floor between sneakers, riding boots, and a doormat. One squeezed under the screen door and into our front hall. I picked it up gently with a towel and put it back outside. It went under again. Wren chaos. One fledgling shut its eyes. How tiring this all is.

The tiny, helpless creatures were easy pickings for a predator. I kept the dogs away and thought how lucky it was the cat wasn’t outside, but blue jays circled a nearby apple tree, which must have been worrisome for the parents. “All the chatter is an interesting dilemma,” Mulvihill said. “On the one hand, the parents must urge the babies off the nest. But on the other hand, all that noise attracts predators, which is the last thing they want to be doing.”
Three fledglings leapt off the porch and followed Mom and Dad.

A fourth wren emerged. It groomed itself, stretched out its neck with a high squeal, flapped its wings, but didn’t fly. It opened its mouth and begged for food. Mom arrived, fed the baby one grub, then another. She squawked. “Let’s get on with it,” she seemed to say. Then all was quiet for a while. Mom and Dad had disappeared; maybe tending to the other three?

Carolina wrens, the largest wren species in the eastern U.S., are little birds, about 5 ½ inches. They eat spiders and insects such as moths, crickets, grasshoppers, beetles, flies, and caterpillars. They are monogamous and have a long breeding season, two or three broods from late March until late September. Mulvihill surmised our fledglings were from a second brood. But wrens are perhaps best known for their amazing songs. “They have so much voice for their size,” Mulvihill said. “They can belt it out more than just about any group of birds.”


Since the mid-20th-century, Carolina wrens have moved northward, but harsh winters can lessen their numbers considerably. “One terrible spell of weather can decimate their population,” Mulvihill said. The winter of 2015 was particularly difficult for Carolina wrens with frigid temperatures and snow and ice that covered their foraging areas. During mild winters, they rebuild. “I think what we’re actually seeing is micro-evolution of a species in my lifetime,” Mulvihill said. Climate change has resulted in winter conditions that are more survivable for the species farther north, and birds that are less cold-hardy are able to survive where once they weren’t, he said. “Likely a blend of the two.” Carolina wrens are now permanent residents of Western Pennsylvania.

Mom wren flew in again, but this time she had no food. I’ll feed you when you get off that ledge, she appeared to say, and it wasn’t just my imagination. According to the Animal Diversity Web: “Adults may decrease food deliveries to get them out of the nest.” But the baby didn’t seem to get the message. It still wouldn’t fly. Mom came back and imitated a heavenly glide as if the baby were to copy her. To no avail. She flew onto the ledge again and gave the baby a talking to. Nothing. Another time she flew in and scared the little one, as if that might make it leap. Nope.

Mulvihill said he wasn’t surprised the parents were scolding the baby bird. “They’re getting annoyed and impatient,” he said. “Following this brood, the female goes immediately back to nesting and the couple can’t be wasting time with a fledgling that won’t budge out of the nest.” Wren parents need to feed and care for fledglings for at least two weeks after fledging and until they disappear from their natal territory, he told me. “It’s a ton of work.”

Finally, Mom brought a grub, showed it to the baby, but withheld it. The problem child had forced Mom to stoop to extreme measures, I thought, which took me right back to my own daughter who wouldn’t sleep through the night for 2 ½ years. Against medical wisdom, I gave her a baby bottle of milk at bedtime. Either her teeth were going to rot or she was going to lose her mother, and I opted for the former. She slept through the night. She did have a tooth abscess around age 7, but has survived happily. I, on the other hand, am still tired 27 years later.

The baby bird cried louder and at a higher pitch when begging for food. Finally, Mom gave in and brought the biggest grub yet. The baby fell asleep.

Was the baby bird sick or propulsionally challenged? Perhaps it had hatched later than the other three. Maybe I was interfering. I’d been observing the fledglings on and off for seven hours. Or the baby bird might have simply liked the nest, Mulvihill suggested, especially after its siblings had moved out. Some birds are just braver than others, he said. “It’s a push/pull for fledglings.” When I went inside to make dinner, the baby was still atop the transom.

I wondered if the parents might abandon the challenging child, but Mulvihill said no, never at this stage, though they may feel tempted. For weeks all their young were in one nice basket, he said, but now the parents have to keep track of babies scattered in different directions. “It’s a trying time. The adults are pulling their feathers out!”

When I came out to watch again, the fledgling was still there. The sun was setting and it was getting dark.

The baby inched onto the ledge. It looked as if it was working up the nerve, but retreated. It flapped its wings and fell over. It had been a long, stressful day for the little fellow — and for those of us watching. Dad flew in and perched next to the baby. He seemed to show it how to push off.

It inched halfway. Its tiny pink toes gripped the ledge.

After nearly eight hours, the baby wren flapped its wings. It jumped. Like its siblings, it landed on the couch and then hard on the floor. But it wasted no time hopping among riding boots. It didn’t go under the screen door or doze off. One flight led immediately to the next. It flew off the porch floor and landed in the grass. The last I saw it, baby Carolina wren #4 was nestled in a euonymus bush, its first journey away from home, into the wild. pq

Fireflies: A Great Flourish of Evolution

Counting Your Chickens During COVID

Trying to Save a Horse