Fireflies: A Great Flourish of Evolution 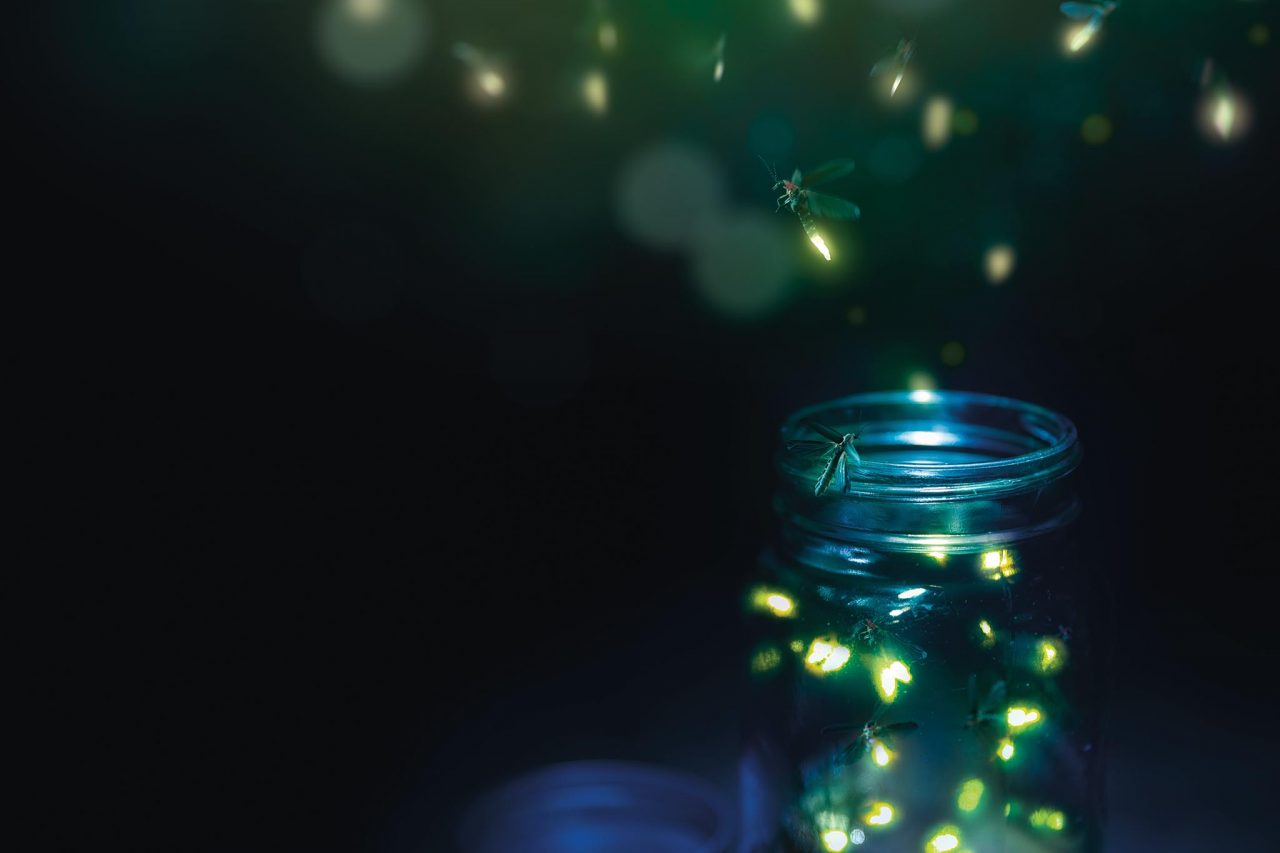 “Male fireflies are like teenage boys,” said Lynn Frierson Faust, who wrote the book, Fireflies, Glow-worms, and Lightning Bugs: Identification and Natural History of the Fireflies of the Eastern and Central United States and Canada. “Males want to be seen, as flashy as possible, advertising their fitness. Look at me, they say!” One species, for instance, Photinus pyralis — the Northeast’s most common firefly, nicknamed the Big Dipper and the easiest for children to catch — shows off his stuff by swooping up and down in a J-shaped pattern, 2-to-10 feet high off the ground, hoping a female might take note and flash back, perhaps from leaf litter below.

“A love song with light,” Faust called the courtship, which she compared to birdsong or frog trill.

But descending from the sky, the male is careful to land as many as six inches away from the female. “He’s trying to figure out, is she real, the correct species, or will she eat me?” Faust said. Because some females, it turns out, are not looking for mates, but for dinner. “Femme fatales,” is the scientific term used by firefly experts. “It’s not all love and roses if you’re a firefly,” Faust said. “You have to navigate a very dangerous world, at least to find a mate.”

If the male suspects she’s a predator, he flies off, to try again another night. But there aren’t many nights for firefly love. The firefly life cycle includes a complete metamorphosis — egg, larvae, pupae, and adult — and adults live only 3-4 weeks. Their larval stage, by contrast, when fireflies burrow into the ground, lasts 1-2 years. And while we may call these insects fireflies or lightning bugs, “they’re not flies, and they’re not bugs,” said John Wenzel, senior biologist at DiscoverLife.

Fireflies are beetles. (“Bug” applies only to “true bugs,” Wenzel said, such as stink bugs or bed bugs, but has become a catch-all term.) Other cultures call fireflies glow-worms, lamplighters, belly on fire, and blinkies, among others, and across the world, fireflies are full of myth. Cambodians believe they bring good luck, while Peruvians call them the eyes of ghosts. Wenzel said legend has it that when Columbus sailed to the Dominican Republic, he saw lights in the woods he thought were people carrying candles, but they were fireflies.

“Fireflies are one of the best topics in all of natural history, if you ask me,” Wenzel said. “They are a great flourish of evolution.”

Like many children, I twirled across our lawn on summer evenings, net in hand, trying to catch fireflies. I put them in a grass-lined jar with an aluminum foil top into which I’d poked holes with a fork, and placed the jar on my bedside table to prolong the enchantment as I fell asleep. Seeing fireflies is for me as powerful an association with childhood as Marcel Proust and his madeleines. And I still watch them as I drift off to sleep—only now from our sleeping porch, surrounded on three sides by the twinkling of fireflies.

As a child, I thought there was one type of firefly that flew around all summer, but there are 2,000-plus species worldwide, on every continent except Antarctica, and 125-plus in the U.S., with three major flashing genera: Photuris, Photinus, and Pyractomena. Each has its specialty: some flash in May, others in July, some at sunset or later at night, and at varying distances off the ground. Colors vary: more green, orange, yellow, or blue. Each has a different flash pattern, although some don’t flash at all, and some females in the eastern U.S. can’t fly. Some fireflies are fully aquatic and have gills. Males are generally what we see at night. Females’ “answering flash,” as Faust called it, is “usually shorter, paler and simpler.”

Of our western Pennsylvanian fireflies, Faust said, “You all have beautiful fireflies, a huge diversity, breathtaking.” She lives in Tennessee, but has studied fireflies across Pennsylvania, including Butler County where her late brother and sister-in-law lives. “You have the famous synchronous firefly, straight up the Appalachians and the Allegheny Plateau,” she said, referring to Photinus carolinas, more abundant in the Great Smokies near her, but visible in our own backyard in the Allegheny National Forest. In June and July, thousands of courting males fly in unison, sending out six flashes followed by six seconds of darkness. Firefly experts don’t really understand why they synchronize.

At least 15 species are known in the Allegheny National Forest, including another nicknamed Chinese Lanterns that has a bluish-green color. Such a wealth of fireflies prompted the establishment in 2013 of the Pennsylvania Firefly Festival, one of the many firefly festivals around the world. Another Pennsylvania species, Photuris pennsylvanica, with its dot-dash flash pattern, happens to be our state insect, thanks to the children in Upper Darby who petitioned the governor in 1974. These fireflies are big, with long legs, the best flyers, carnivorous, and include the femme fatale.

I believe I’ve noticed fewer fireflies than I did as a child, and Marc Branham, associate professor of entomology and nematology at the University of Florida, said he hears that lament often. “There’s a general notion that firefly numbers worldwide are in serious decline,” he said. For one thing, what’s called ALAN — artificial light at night — prevents males from finding mates.

“Neighborhoods that are lit up all night long for sake of security really interfere with firefly behavior,” Branham said. Fireflies in salt marshes and coastal plains are in danger due to sea-level rise. Habitat destruction is a huge problem, especially in subdivisions, because the soil is dug up and the larvae are underneath. “You never know you lost them,” Faust said. Pollution harms them and lawn and garden sprays can be lethal. Branham remarked on how many fireflies he saw on Amish farms in Ohio—because for 100 years they’ve kept the soil balanced and the ecosystem healthy by rotating crops without the use of herbicides, pesticides or fungicides.

The good news is that fireflies don’t bite, sting, aren’t scary, creepy crawly and don’t harm crops, Faust said. “They are one of the few insects we are not trying to kill.” Most people are delighted by them and they connect us in a magical way to the natural world. “Once the sun goes down, they put on a show,” Branham said.

Fireflies eat primarily in the larval stage — mostly snails, slugs and earthworms. Faust has seen a firefly larva inject numbing venom into a cockroach and the cockroach didn’t even know it was being eaten. For years, experts believed fireflies didn’t eat at all as adults, but in 2014, Faust discovered fireflies sipping the sap of milkweed. Generally, though, “fireflies go from being eating specialists as larvae to being breeding specialists as adults,” said the late firefly expert Dr. Jim Lloyd, quoted in Faust’s book.

Fireflies have a host of defense mechanisms. “How else could you fly around advertising your location with flashing lights in a world filled with frogs, toads, bats and birds?” Faust asked. In addition to being a mating signal, their bioluminescence is also a warning signal: don’t eat me. They play dead, are camouflaged, and have menacing aposematic coloration of red, orange, and yellow combined with black and white. They smell and taste bad. John Wenzel ate one once, calling the flavor bitter and horrible. That taste is a cardiac toxin called lucibufagin, which has been known to kill escapee exotic pets that made the mistake of snacking on fireflies; it’s surmised that eating 10 could kill a human. Toads, however, must go back for second helpings as they’ve been seen glowing through their stomach walls. (Toads, Branham said, are known to eat distasteful things and have a bad long-term memory.) Some birds eat them, such as grosbeaks and robins, but very few; spiders are one of the creatures that gobble them up. Lucibufagins are why femme fatales eat males of another species; they cannot manufacture their own defense chemicals so they eat males that contain it and transfer those chemicals to their eggs and larvae.

Fireflies have been studied since the 1700s, but there’s much scientists don’t understand, and new species are still being discovered. Mass Audubon runs a Firefly Watch encouraging people to become citizen scientists. So go out when the temperature is 60-85 degrees (below 50 degrees there’s no point in looking, Faust said) and find a natural location, such as a park, conservation area, cemetery, farm, or forest. Study flash patterns, and keep a record of what you see, where and when. Were my children younger, I’d urge them to discover a new firefly. I may even take a twirl or two with a net this spring.

My daughter tells me she too remembers poking holes in aluminum foil and catching fireflies, but as young firefly hunters, we may have been too careless. I wasn’t aware we should have kept them out of the hot sun and air conditioning, or that instead of grass we might have added moistened, unbleached coffee filters to the jar, maybe even an apple slice. We should have released them within 24 hours to the same location. Still, Faust, a great protector of fireflies, is adamant that children be allowed to catch them. “Please do not forbid children that lifelong, pleasurable, wondrous memory of catching fireflies on a warm summer’s evening and putting them in a jar,” she wrote.

If I think back to activities I wanted to share with my young children, catching fireflies would surely have been one of them. Is that not childhood at its best? Unplugging from the electronic world, being outdoors on a summer evening, marveling at one of nature’s wonders, sharing it together, maybe even learning something about science? I hope their children get to participate in this same ritual, so please, turn off the lights. Stop spraying chemicals. Save a firefly.