How Baseball Saved My Life

As told by Idolo Zinobile to Ray Werner, his neighbor.
by Ray Werner
2022 Fall 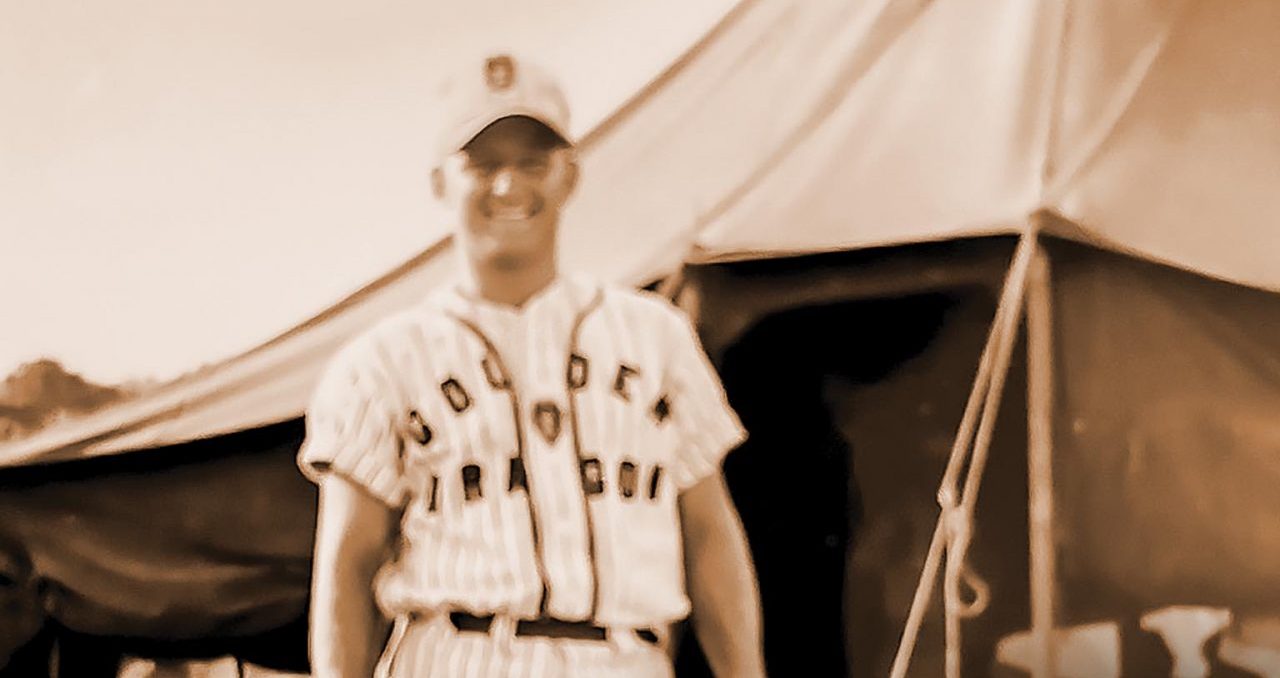 He dove into a garbage dump exploding with flies to avoid shrapnel from a Commie mortar bomb, lobbed just over the hill in North Korea. Diving into that dump may have saved his life.

But what really saved his life was diving after a long fly ball and making an impossible catch. Well, not impossible when your feet have wings and your glove has eyes.

The Korean war was raging. Idolo Zinobile, a kid from Swissvale, was drafted into it. It was 1952. Within a year, he earned two bronze stars for courage in combat. His love for his country was pretty close to his love for the game of baseball.

Idolo was fast and he could hit, Growing up, baseball was what he lived for. He played baseball as if his life depended on it, and one day it did.

“Baseball saved my life, I know that.”

Idolo is pushing 93 now and has pushed his legs so hard he now needs to be pushed in a wheelchair.

But back in 1951, he was so good that he was invited to Spring Training to try out for the Pirates’ GM Branch Rickey. Just a few years earlier, Rickey signed Jackie Robinson to play for the Brooklyn Dodgers. Then Rickey was hired by Bing Crosby and other Pirate owners to rebuild the struggling Bucs.

Rickey had a great eye for talent. He also had a stellar cadre of baseball scouts. George Sisler discovered Robinson in Montreal in 1942 and recommended Rickey bring him to Brooklyn. A year later, he followed Rickey to Pittsburgh, and recruited Roberto Clemente in 1954. George Sisler was a legendary ball player himself and still owns a slew of impressive stats.

Working with Sisler was Charles Mose, who scouted Idolo and recommended him to Sisler. (Rickey charged Mose with developing the first ever baseball safety helmet, pioneered by the Pirates.)

They invited Idolo to Bradenton, Florida to try out and when he arrived, he recalled, “It was just me and another player from Pittsburgh. The others came from all over. Pretty exciting. A chance to play in the Majors. Hey, a kid from Swissvale? You kiddin’ me?”

“What was it like, Z?” (A lot of us neighbors call him Z, which is easier than Idolo.)

“It was like being on vacation. They treated us great, a hundred percent.”

“He was blunt. Came right out with it. He didn’t beat around the bush.”

After a week of watching him play, Rickey called Idolo into his office.

Put yourself in Z’s place. Spring Training, hobnobbing with the best, in the world’s greatest game? No other game demands as much from an athlete. You have to able to run, hit, and throw, and you have to be smart — think fast — and do it all with split-second timing.

If you make it to Spring Training, know what your chances are of making it to the big leagues? Less than slim. A notch up from impossible.

“I thought I had a chance. There was only one other kid down there faster than me. And he was a track star from some big college out West. So, yeah, my hopes were up.”

In the office, Rickey said, “You’re fast, kid. And you can hit. But you can’t throw. You don’t have an arm for the majors.”

And that was it.

“Branch Rickey said they didn’t have time to invest in what it would take to develop me. He was very direct. That was his style. Some players thought he was a bully. I just thought he was honest.”

“It must have been a great disappointment.”

“Not really. It was like a vacation. A great week. They came from all over. And I had my chance. Branch Rickey was right. I could hit, I could run, but I didn’t have a strong arm. So, I come back home.”

Back home with a good story and a deeper love for the game. Invited by Branch Rickey, with letters to prove it.

A year later, 1952, Idolo was drafted into the Army and soon found himself on the front lines of The Korean Conflict.

They called it a “Conflict” because just five years after World War II, America was tired of the word “war.” Korea? Never heard of it. Or could find it on a map. The “Korean Conflict” had just a 15 percent approval rate. It was brutal. The 38th Parallel became etched in our minds. We lost nearly 37,000 of our finest, and there were more civilians killed in Korea than in any wars since.

Idolo’s company, 3rd Battalion, 14th Infantry, was in the thick of it. They distinguished themselves in almost constant combat along the 38th, defending positions on Heartbreak Ridge and Pork Chop Hill. Among their fallen were three Medal of Honor winners.

Idolo Zinobile might have been among them, but baseball intervened.

“The Commandant came into our company one day and said, does anyone here play baseball? I raised my hand. They were short a player, so they gave me a uniform and I played a game. Everything went right. I got a couple hits, drove in a couple runs and made two sensational plays in centerfield. I was fast. Made two diving catches. It was just one of those days. I got lucky.”

With the enemy just over the hill, his company was ready to move to another position for more deadly combat. But the day before they were to move out, the Commandant came to his company commander and said he wanted Idolo to play on his regimental baseball team. He had seen him play and they were in tough competition with other regiments.

So his company moved out and Idolo moved to centerfield for the Golden Dragons. They played teams all over the Far East, including Japan, and a year later, they won the Korean Regimental Championship title.

In April 1954, very much alive, he was back in Pittsburgh, playing baseball every chance he got. He married his beautiful Audrey, who died of cancer 30 years ago. They had three sons, Tony, Michael and Tom. In retirement, Idolo was the sacristan for St. Bede Parish for 20 years, prepping the altar for Mass at 6:30 most mornings.

And, he got into another big league game, making movies. His son Michael is a Best Boy Grip for filmmakers, and he invited his dad, with his engaging smile and great look, to work as an extra. He caught on big time. So you might know Idolo to see him. He’s been in some of the best movies made in Pittsburgh, over 30 of them, as an extra hobnobbing with Tom Hanks, Susan Sarandon, Sally Field, Bruce Willis, Drew Barrymore, and Peter Falk.

The local Vets just built a ramp to make it easier for Z to get back and forth from his historic Hastings Street home in Point Breeze, so you might see him out on a nice day in his wheelchair.

Honk your horn, and he’ll give you a wave ­— with that glove hand that once made some diving catches that were absolutely incredible. Including a couple that saved his life.

The Fledgling Wren that Wouldn’t Budge

Bill Virdon: He Made Everything Look Easy

The Pittsburgh Dodgers: In the Wake of Jackie Robinson