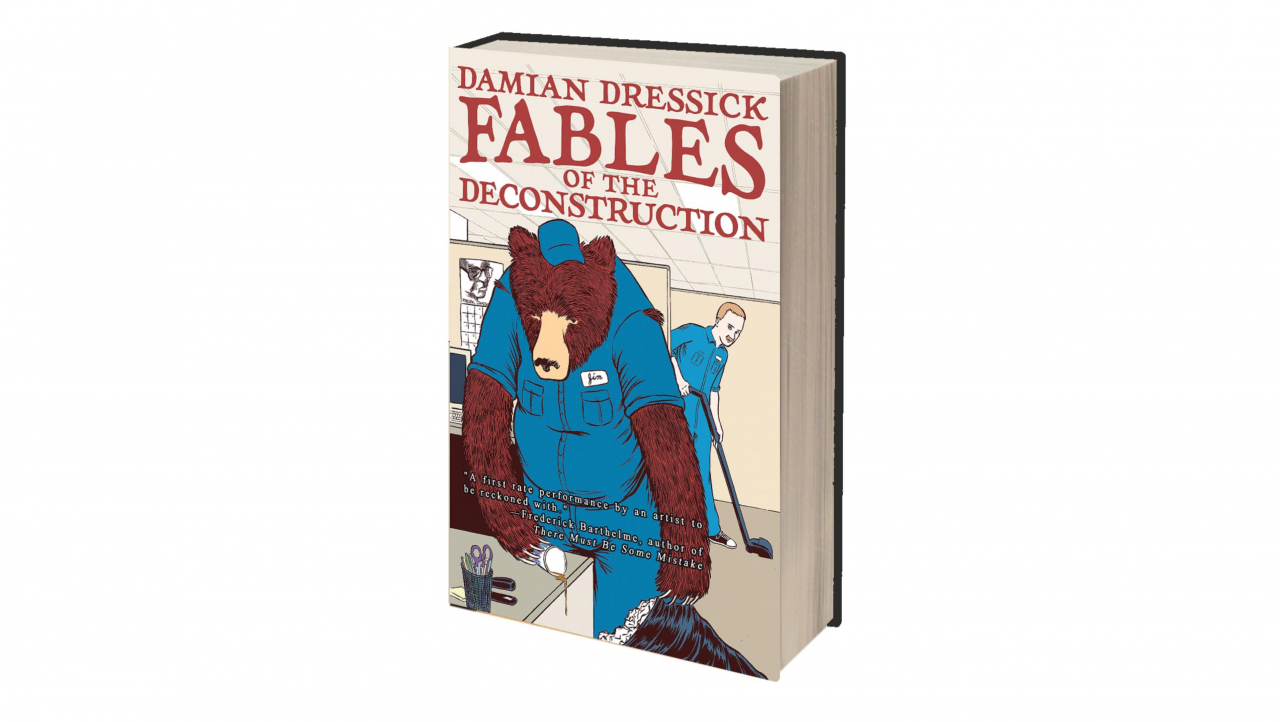 Flash fiction wasn’t invented by Hemingway but his classic six-word story, “For sale: baby shoes, never worn.” stands as a well-known exemplar of compressed emotion. With a word count that runs anywhere from five to 1,500, Writer’s Digest further defines the genre as not “focusing on plot or character development, the writer instead focuses on the narrative’s movement. Every sentence, every word, should reveal something to the reader that we did not know before. It should also hint at a larger backstory than what’s revealed on the page.” Formally, it’s an apt appraisal of the 63 often innovative and quirky stories from local writer and Clarion University professor Damian Dressick, whose Fables of the Deconstruction arrives as a collection that hits the mark in engaging post-modern ways.

In “Life Lesson,” readers are dropped into “1972 and the war, unpopular now even in the suburbs, sputters on. My father, not a Buddhist monk, nonetheless flirts with self-immolation.” There’s a comforting familiarity to the setting — a driveway, a Buick — until the father douses himself in a quart of gin, while “His left hand toys with the wheel of the Zippo.” The tense moment is extinguished when the narrator’s mother “sprays him down with the garden hose, calls for my uncle in the house across the street, my father is laughing. ‘I can do this any time, Alice,’ he says.” It’s a striking scene needing only 158 well-placed words.

Dressick, in an interview with SmokeLong Quarterly, analyzes his take on the genre: “Short shorts are in some ways their own country. You aren’t spending a lot of time with the reader, so the onus shifts from keeping an audience to trying very quickly to provide something they can take with them, something that dislocates, makes them feel like they’re enmeshed in a place of substance. I’m also a sucker for stories that don’t shy away from sensational moments and those that conspicuously attempt to place their characters within capital ‘H’ history.” The bite-sized stories of Fables… will keep readers on their toes as Dressick veers from the allegorical (“The Food Speakers”) to the satirical (“Bruce Redman Says ’No, But Maybe’”) to the personal (“In Order to Live”), sometimes setting stories up as lists, pie-charts or a commented on Word document. These latter innovations vary in success, perhaps leaving traditionalists wanting something less experimental.

While Dressick, a Windber native who also penned the recent coalfield-centered novel, 40 Patchtown, showcases blue-collar sensibilities in “Jesus in 42,” he nails something more ephemeral, in “Possession.” Against the backdrop of Bob Marley’s last concert, its setting becomes the answer to many a Pittsburgher’s favorite trivia question: September 23, 1980 at the Stanley Theatre.

Here, the narrator dreams of being part of the crowd, “the millworkers, the waitresses, the stockboys, the slick-haired lawyers — all on their feet and swinging pale hands through the air, beckoning for the encore, their cheers cajoling the great ailing man back onto the wide plank stage.” The scene is a familiar one to concertgoers, with lighters being lit, the fabulous rendition of “Redemption Song” being wailed, brilliantly described as “pure connection…the warm hand of god reaching down from fresh heaven and cupping your heart in its glowing, numinous palm.” The pathos of the moment is palpable, yet the ending is hard-hitting and existential. “Your inability to connect here is profound, inviolable. There is nothing you will take home but a headshaking puzzlement at the hokiness and showbiz of the whole affair. This is it, you remember. This is the dream in which you are alone.” And while readers looking for the closure that conventional short fiction offers may feel on the outside looking in, those willing to embrace the literary carnival Fables of the Deconstruction embodies will find it well worth the price of admission.
Categories: Books Culture
Tags: