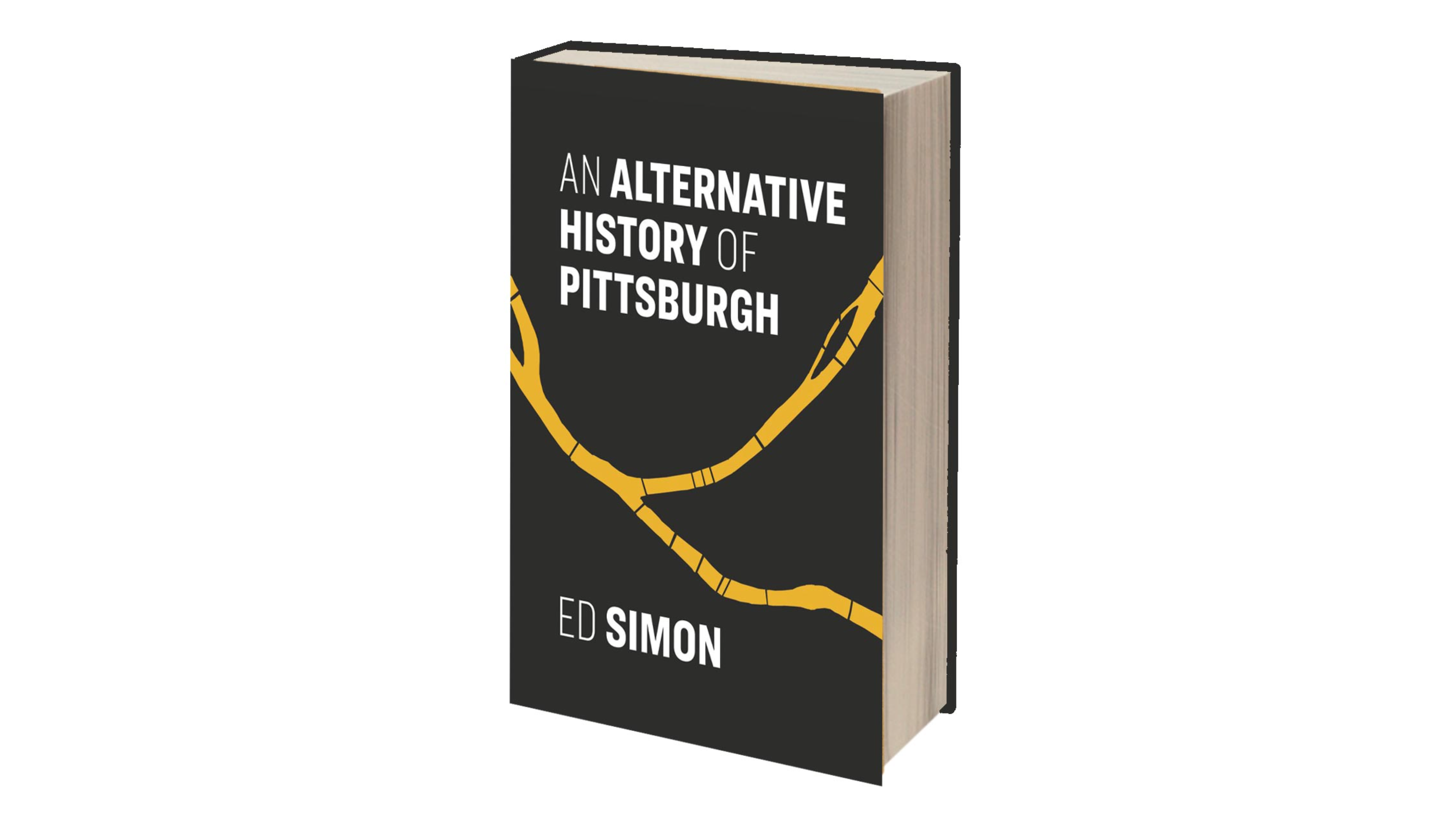 An alternative History of Pittsburgh by Ed Simon [Belt Publishing $16.95]

Pittsburgh has been labeled variously as a “mosaic,” “hell with the lid off,” and “the Paris of Appalachia.”

The East Liberty-born poet Jack Gilbert describes the city in his poem, “Searching for Pittsburgh,” as being made of “brick and tired wood/ Ox and sovereign spirit/ a consequence of America.”

Those characterizations loom as well-played section titles in Ed Simon’s exceedingly satisfying and insightful An Alternative History of Pittsburgh, which posits that his hometown is “a consequential place…an important place…a place that matters.”

Now living in Washington, D.C., Simon has a Ph.D. in English from Lehigh University and his essays have appeared in The Atlantic, The Paris Review Daily, Salon, The New Republic and The New York Times. His narrative approach succeeds by historically tracing sometimes less well-known aspects of the region, with the timeline of these stand-alone pieces ranging from prehistoric to the Modern Era. His overview effectively argues that “Pittsburgh has always been more in Pennsylvania, but not of Pennsylvania,” with a foot in the Northeast, Midwest, and Appalachia.

Simon blends historical sources with engrossing insights, mixing quotes from scholars with a nuanced and telling analysis. Each of the histories runs roughly 1,000 words, or the time it might take to eat a few cuts of “Police Station Pizza” in Ambridge, not far from where the Harmonists, who get their moment in a chapter titled, “Harmony,” eventually settled. Each chapter, dedicated to Pittsburgh’s less well-known past of fires, bloodshed and prehistoric intrigue, showcases an author well-versed and comfortable with his writing voice.

Beginning in 300 million BCE with “A Leaf Transformed into Coal,” Simon walks readers through the primeval landscape of what would become Pittsburgh, on the “long-forgotten continent named Laurasia,” situated “on the edge of a shallow, temperate sea that stretched across the flat basin of the Midwest.” With humans not yet on the scene, the region was populated by all manner of insects, “centipedes that grew longer than six feet, with smooth eyeballs the size of softballs…dragonflies that had twice the wingspan of a dove.” Simon quotes biochemist Nick Lane’s book, Oxygen: The Molecule that Made the World, that “Gigantism was unusually common in the Carboniferous.” The megaflora of this time became the coal that ultimately fed the coke ovens and the region’s industrial rise, the plant matter’s burial helping to “raise atmospheric oxygen levels throughout this time, just as burning it is lowering them again today.”

The early pieces work their way through the pre-Clovis people who settled in Meadowcroft, outside of Avella, 19,000 years ago, making it the oldest continually occupied settlement in North America, to the Iroquoian peacemaker, Deganawidah. He tried to broker peace between tribes in the time before Columbus, when life for those Indigenous people was “defined by famine, pestilence, warfare and death.”

Simon examines the Quaker William Penn, with his namesake state becoming “the single largest individual land claim in the entire world,” and notes, “Pittsburgh has always been liminal as the frontier, its geography as ambiguous as its discovery…Much of Pittsburgh history is lacunae.” Simon’s balanced and easily digestible approach is a winner that pulls no punches for some of the city’s more well-known forebears.

While the Battle of Monongahela leaves Daniel Boone as witness to General Braddock’s 1755 routing by the French and Indians, calling it “a baptism of blood,” a young George Washington describes the British reaction as “struck with such a panic that they behaved with more cowardice than it is possible to conceive.” In a time of English settlement and reneging on treaties made with local tribes, Simon holds his strongest ire for Colonel Henry Bouquet. He would “conceive of something heinous, an incontrovertible war crime and an aid to ethnic cleansing and genocide,” that being biological warfare in the form of blankets given as peace offerings to the local tribes and inoculated with smallpox, which “had killed millions of Indians over the previous two centuries.”

In “’Beautiful Dreamer,’” Simon takes Stephen Foster to task as being part of a long line of imitators, rather than innovators, in American music. Elsewhere, he describes Andrew Carnegie as “a proletarian” because of the arc of his rags-to-riches life. In “A Nativist in Market Square,” readers meet Reverend Joseph Barker, who briefly became mayor of Pittsburgh by leaning on bigotry aimed at Catholics and immigrants. “The Great Railroad Strike” considers 1877, when the labor movement first found its footing. Simon ponders whether, without the interceding of President Rutherford B. Hayes, the country may have moved toward socialism. Simon calls Henry Clay Frick “an enemy of equality,” and adds that his would-be assassin, Alexander Berkman, claimed upon the industrialist’s death that Frick had been “deported by God.”

Part III’s “Rise, Fall and Reinvention” includes Evelyn Nesbit and her role in the first “Crime of the Century.” Simon claims that Rachel Carson changing her major from English to biology at Chatham University was a world-changing moment. Frank Lloyd Wright disdained Pittsburgh’s architecture, saying it would be cheaper to abandon the place and rebuild elsewhere. But that would remove what D.H. Lawrence called “the spirit of the place,” or what Simon points to as “transcendental” in our geography, “the dazzling birth of lights that is Pittsburgh.”
Categories: Books
Tags:

The Global Supply Chain is Collapsing

This Johnstown Mob Story Is Business and Personal