A Princess on the Bluff 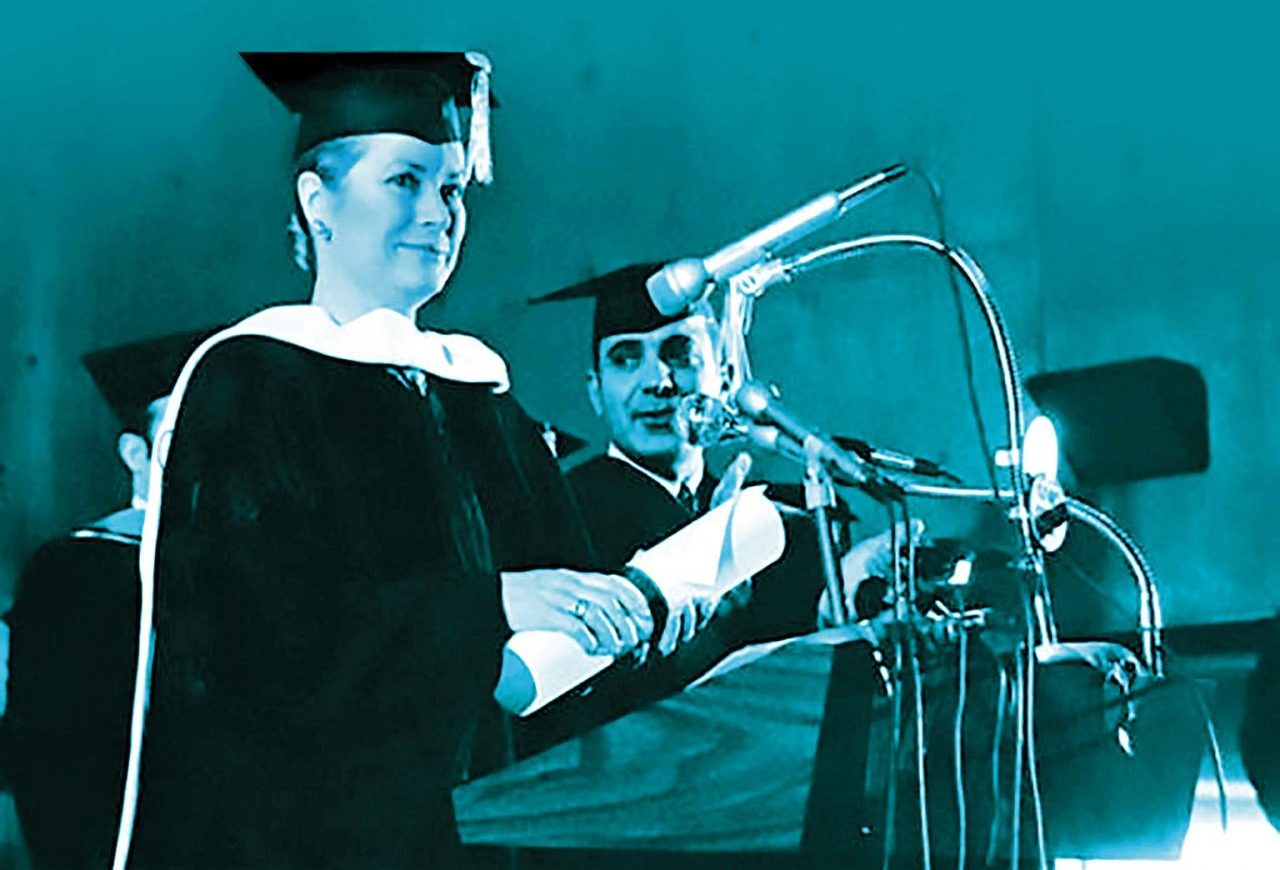 On February 26, 1978, Princess Grace of Monaco presented a poetry program entitled “Birds, Beasts and Flowers” in the Carnegie Music Hall under the auspices of the International Poetry Forum. This was her first professional appearance in the United States since her marriage in 1954. This would also be her first visit to Pittsburgh. Though a Philadelphian, she had never been to Western Pennsylvania.

What prompted her coming was a news item that a friend of the Forum, Denise Ellis, called to my attention. It was reported that Princess Grace had presented a poetry program with the British actor Richard Pasco in Edinburgh.

With nothing more than that to go on, I sent an invitation through the Monaco Consulate and within a week received an acceptance from Princess Grace in longhand that she could come with Mr. Pasco in late February on her return trip from Los Angeles after her meeting with the Board of Directors of 20th Century Fox.

As a faculty member at Duquesne University, I then suggested to Father Henry McAnulty, the visionary and decisive president at that time, that he might offer the princess an honorary degree in conjunction with the visit. He smiled Irishly and agreed. Although the princess had received numerous other honors up to that point, primarily in Europe, she had never agreed to accept any honorary doctorate when offered from any university, and many had been offered.


Before her arrival in Pittsburgh there were numerous problems to be solved concerning residence, transportation, security and so on. Also there was a threatened coal strike, and various city and state officials were warning that many evening events might have to be postponed or canceled in the interest of saving energy. At a crucial time, Gov. Milton Shapp intervened and the performance, as well as a second performance on the night following, went on as scheduled to capacity audiences.

For security reasons I had to contact the city’s Department of Public Safety to request a bodyguard for the princess. The guard assigned was a veteran detective named Charles (or Charlie as we all came to call him) Jordan whose regular beat was with the Vice Squad. He handled what must have been a radical transition perfectly. He was always polite but frank and never obsequious. That could have been why the princess was always at ease in his company. Some of their scenes together could have been from a script called “The Cop and the Princess.” “Your slip’s showing on the right, Princess,” he said once as they walked to a rehearsal. She thanked him and adjusted it. It was as if she had just been admonished by her brother. On the evening before she left, he introduced her to Iron City Beer, and I have a photograph of the two of them drinking beer together from two bottles. When it was time for her to leave Pittsburgh, Charlie told her that he could not accompany her to her gate because he was carrying a weapon, but he took her hand and said, “Princess, it’s been an honor to guard you. If I ever get to Monaco, I’d like to invite you out for a cup of coffee.” She smiled and said, “Sure, Charlie.”

When Charlie died three years later on the job from a heart attack, all who came to the viewing saw a photograph of him and Princess Grace that Mrs. Jordan had propped in the casket. Later, Mrs. Jordan received a handwritten letter of condolence from the princess, together with similar letters from Mr. Pasco and others from their group.

Although Princess Grace would be associated with the International Poetry Forum on two subsequent occasions in 1980 and 1981 (a poetry program in the Salle Garnier in Monaco in 1980 with William Jay Smith, Andree Chedid, Simone Valere and Jean Desailly, and in 1981 in a second Pittsburgh program entitled “A Remembrance of Shakespeare” with John Westbrook), it was the Duquesne doctoral investiture that made the front pages of both local newspapers at that time. The event received national attention as well and has since been prominently mentioned in all biographies of the princess. The ballroom of the Student Union was filled to capacity with students, faculty and others. The orchestra was in formal dress, and Julia Lerner, a professor of voice in the Music School, opened the program by singing the anthem of the Principality of Monaco. Father McAnulty brought the princess to the rostrum to say a few final words, and she emotionally thanked one and all for the honor. Applause followed her when she left the stage and continued when she returned to her car that was completely surrounded by students.

Just before she left Pittsburgh, Princess Grace had a final meeting with Father McAnulty in which he mentioned that the university was planning to build a theater and said it would be an honor to have it named the Princess Grace Theater. She told him that the honor would be all hers and that she would contribute memorabilia and help in other ways. After she was killed in an automobile accident the next year, on Sept. 14, 1982, the theater-naming was shelved.

In 2002, my wife and I were invited to Monaco on the 25th anniversary of Princess Grace’s death. Before leaving Pittsburgh, I asked the then-president if he would like me to revive the theater-naming with Princess Grace’s son, Albert. He gave me a letter authorizing me to speak for the university on this matter. After discussing the subject with Prince Albert and finding him enthusiastic, I reported his response to the president, who seemed suddenly uninterested in building a landmark campus theater named for the Princess of Monaco. Years later he did build a small, pocket-theater (classroom sized) and named it after a certain Genesius, a 4th-century patron saint of clowns, comedians, converts, actors, lawyers, barristers, epileptics, dancers, musicians, printers, stenographers and victims of torture. A theater named for an internationally respected and distinguished woman who was an Academy-Award-winning actress, a ranking member of the Board of Directors of 2oth Fox, a co-ruler of the Principality of Monaco, the president of the International Red Cross whose annual ball in Monaco raised millions for the needy, the person who regenerated the Ballet Reuse de Monte Carlo, the founder of the Monaco hospital that bears her name, the founder of a mission called AMADE that promotes the rights of children around the world, and an internationally recognized botanical authority who was fluent in English, French and German apparently did not impress the aforesaid president.

All who attended the doctoral investiture of the princess at Duquesne received the news of her death in 1982 with particular sorrow. It so happened that I was in Washington on that day, arranging for a projected poetry reading that she had consented to give at Wolf Trap in 1983. The initial reports of her injuries in an automobile accident did not indicate that they were that serious. I drove home without having listened to the car radio to find a host of reporters at my home who informed me of her death. One of the television reporters was a young woman who seemed as upset by the news as I was. She listened, made notes but was reluctant to ask a question. It was Sally Wiggin, who went on to become (and still is) a highly respected and loved television journalist in the city.

At a moment when other journalists may have found an opening to ask less relevant questions prompted by mere curiosity, she maintained a quiet and sincere silence. It captured for me what was the most humane response to the entire tragedy, and I’ve never forgotten it.

Other memories stay with me as well. I particularly remember how respectful the Duquesne students were, not only in the ballroom where the investiture took place but afterward when the princess walked to her car. Students surrounded the car, but there was no shoving or jostling. One of them told her, “I can always say I was in the Class of 1978 when Doctor Princess Grace got her degree.” I could see that the princess seemed to be very much at home. She was with young Americans on an American campus. Gone for the moment was the European deference to royalty; in its place was Pennsylvania camaraderie and respect. It was the same love and respect she showed when she asked me to name a local institution to which she could give the honorarium she received for her Forum appearance. I suggested the Holy Family Institute, and she went there with me to present the gift in person to Sister Linda Yankoski, the Institute’s president.

The most Pittsburghesque as well as the most unforgettable incident happened on the evening before the Princess left Pittsburgh. I had arranged for a farewell dinner at LeMont Restaurant on Mt. Washington. Members of the Poetry Forum’s board attended along with other guests. At one point the Princess excused herself and went to the Ladies’ Room with another woman. A bit later, Marilyn Donnelly did the same. When Marilyn entered the room, the attendant appeared to be in a state of complete dismay. “Honey,” she told Marilyn while trying to catch her breath, “You’ll never guess who was just in here…” She paused, took another breath and added, “The Princess of Monaca!”

Perhaps the most touching tribute to Princess Grace was a memorial created by her husband in Monaco. The palace in Monaco sits atop a mount in the center of the principality. At the foot of the mountain is a garden which contains every known rose in the world, including one that was bred for Princess Grace alone and called the Princess Grace rose. It is located centrally so that all the other roses surround it. From his office in the palace Prince Rainier had a clear view of the garden, as he intended. The rose garden is known officially as the Rosary of Princess Grace.

Samuel Hazo is the author of poetry, fiction, essays, various works of translation and four plays. Governor Robert Casey named him Pennsylvania’s first State Poet 1993. He served until 2003. From his first book, through the National Book Award finalist “Once for the Last Bandit,” to his newest poems, he explores themes of mortality and love, passion and art, courage and grace. samuel​ha​zoau​thor​.com

Touring Our Industrial Past

What Happened to Youngstown?

In the Mind of the Beholder