Expanses of glass open the sunroom to nature. Donghia fabric covers a pair of Tarlow side chairs and a Rogers and Goffigon mohair is used on the sofa. A pair of custom lounge chairs in Lee Jofa’s herringbone line flank an iron, glass and mirror coffee table by Francis Nowalk.

Make a left and then another and a pristine gravel drive leads to a scene of sheer bucolic bliss. Wrapped around the courtyard is a 1920s home thought to have been designed by Brandon Smith. Though his name is not on the original plans, it is in the architect’s style, examples of which abound in the region. 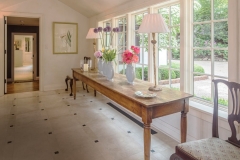 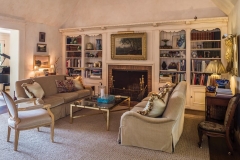 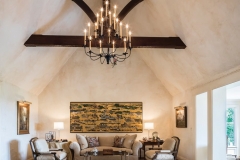 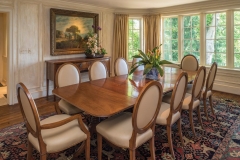 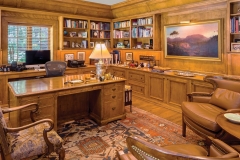 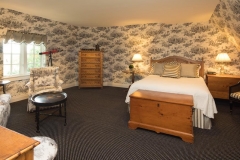 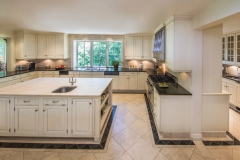 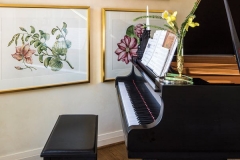 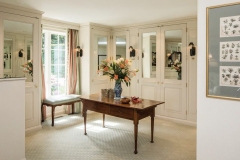 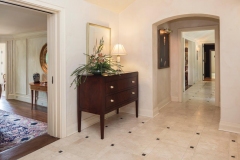 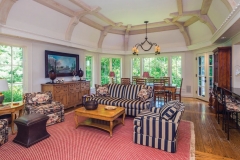 But this house is special, as much for its scale as its setting. From the outside it doesn’t appear to be that large, with a low profile that belies the spacious interior. Nestled on two acres with grounds registered in the Smithsonian Archives of American Gardens, the home overlooks more than 20 acres of rolling hills and green valleys. Not a sign of civilization is visible from the elevated perch, only spectacular views in every season and an abundance of nature.

That was the appeal for the couple who purchased the Fox Chapel home 30 years ago and set about completely restoring and then expanding the residence.

“I feel like we could be in another country. We could be in the south of France or Switzerland or England,” says the husband. “It’s the nature of the topography of western Pennsylvania. We both grew up in the country, and the thing that attracted us to this in the first place was the nature. Virtually every day we see deer and turkeys and red tail hawks. We definitely share what’s around us with them.”

Yet what is astonishing is the home is a mere 12 minutes from Downtown, where the husband works, with no stoplights along the way.

“In the morning you leave a totally natural environment and at night you come back to living among nature. You’re not in the woods, you’re overlooking them. You can see for miles. There’s just a feeling of independence and comfort when you’re in nature, almost like you’re living inside a painting or a symphony. It’s a joyous feeling. Nature as art.”

The brick and stucco were painted yellow when the couple moved in, thinking the home was in good condition. “We found out the first night we moved in that it wasn’t,” laughs the wife. “We didn’t have a functioning master bath.”

Their first step was restoring the exterior to its original white and brown and reclaiming the brick. All the windows were replaced, including the bottle windows in the entrance hall. “We found the company that made them and rebuilt them from the 1929 plans,” says the wife. The old knob and tube wiring was also replaced, a new HVAC system was installed and the home was re-plastered, restoring the architectural details.

“It was built by George McCook, and his brother-in-law was E.J. McCague, who built a house nearby. They were polo players and below us were the polo fields, club and stable where the McCooks and McCagues had their horses.”

The house has undergone several renovations through the years. A sunroom and master bath were added in 1991, and in 2000 another 2,800 square feet substantially increased the living space. The couple brought in the late architect Tony Stillson and asked him to design an addition that would retain the character of the house and integrate its original architecture. Then they moved out for two years.

The project doubled the size of the kitchen, added a large family room, a back hall and guest quarters, a three-car garage and exercise room below, and the former garage became a pine-paneled office. In 2014 an attic with a pull-down door was made accessible with new stairs, dormers were added and the space expanded into a spacious office for the wife. The attention to detail and craftsmanship throughout echoes the original workmanship.

“We asked Tony to create space that was very light and open, that was mysterious, a little playful and relaxed,” says the wife. “The other request was to make sure he oriented the entire house to the outside and bring the gardens in.”

In addition to several outside patios and a wealth of mature rhododendrons, the home is surrounded by gardens planted by the couple and protected by two acres of deer fencing. There’s a shade garden, a cutting garden, a vegetable garden and a mini-orchard with peach, pear and cherry trees. For his 60th birthday the wife gave her husband a rose garden.

“The gardens were planted with four seasons in mind. There’s something usually blooming. In the winter, when there is snow, it takes on a new life, and the colors in the fall—it’s a rainbow. Every color you can imagine,” says the husband.

The couple recently decided to put their home on the market, in part because they travel a great deal. But there is something deeper that informed their decision to sell a home on which they have lavished so much effort and love.

“We both like challenges, and we respond to the concept of leaving something better than you found it,” explains the wife. “This was a very big challenge, but now we are ready for an adventure. It’s time to get on with the next exciting phase of our lives, time to make something else better than we found it.”

The home is listed with Howard Hanna Realty Services.