The addition by Tony Stillson includes a new breakfast room, which overlooks the parterre and is used for informal dinners.

Following in the footsteps of Brandon Smith would be a daunting task for most architects. He left his imprint throughout the region, designing in his lifetime (1889-1962) many Western Pennsylvania landmarks. 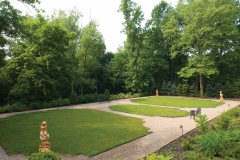 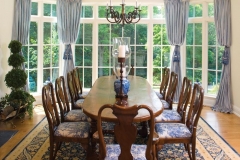 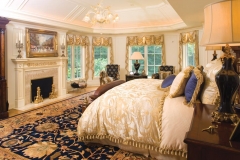 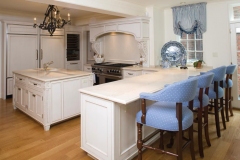 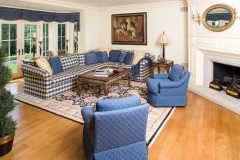 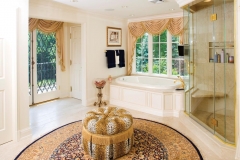 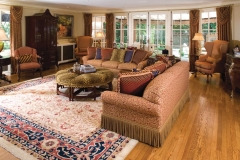 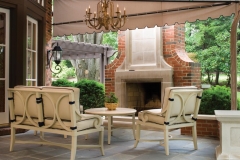 While best known for institutions such as the Edgeworth Club, Fox Chapel Golf Club and Shady Side Academy, Smith was the architect of choice for wealthy Pittsburghers who desired to live in some version of baronial splendor. The residences he created were largely Tudor, but with a lightness and charm not usually associated with that style. Though many would be termed mansions from the outside, the scale inside was always intimate.

That was the problem for a Fox Chapel couple who owned one of Smith’s most stately homes. Built in 1917, it had every amenity for that era including a gracious living room. But who knew then that a century later, people would actually entertain in the kitchen? That was especially true of the homeowners, who also maintain residences in two bastions of casual living — Florida and California.

“We give a lot of parties, and everybody always ended up in the kitchen,” says the lady of the house. “I really wanted a big kitchen area where the flow could go through the family room or into the dining room and living room. We also wanted to add a breakfast room for informal dinner parties and to open the house up to the grounds below. But it was important to keep the integrity of the old house with the new improvements.”

With that mandate in mind, they interviewed several architects but quickly settled on Tony Stillson, who had designed homes for friends. His conceptual drawings captivated the owners, for he created an addition that emerged seamlessly from Smith’s original plan. Once onboard, Stillson decided to enhance the rather plain entrance, create a new master suite on the second floor of the addition and add an awning over the terrace where a giant outside fireplace would be built. “We have one in California and use it all the time,” the owner says. “It’s just great.”

Perhaps the most striking change Stillson made was shifting the orientation of the house. Mirroring the French doors in the living room, Stillson used them for the breakfast room and new family room, flooding the house with light and connecting it to new stone terraces and the gardens. Tennis courts below the house were replaced with a spectacular parterre designed by Shelly Stoecklein. Everywhere there are plantings and flowers, and an entrance to a secret garden that doesn’t exist cleverly hides the neighbors.

That a project of this scale was completed in less than two years is a tribute to the teamwork of all involved — Stillson and his associate Pam Wagner, and Marshall- McCay Construction. “They were just unbelievable,” the owner says. “I’m a hound dog. I yip at everybody’s heels until I get it done right and quickly. Considering what they found that needed to be done, they did a spectacular job.”

The owner, a former fashion designer, did her own decorating. Though only a hobby, she has done homes for friends as well as the couple’s other residences. She describes the California house as Pan Asian, and in Florida it’s Tommy Bahama. But Pittsburgh called for traditional English and French country. She shopped both abroad and across the United States for the furnishings but bought her rugs locally from London Oriental Rugs, which she calls “really creative, amazing.” Colorworks was brought in to consult on the soft, subtle paint colors the owner prefers, with many being variations of a tint. The creams of the kitchen, for example, are taken from the honed Botticino marble of the countertops. Well-designed lighting adds drama throughout, but especially in the master bedroom with its tray ceiling and Murano glass chandelier.

“I think I’m really a traditionalist at heart, and so is my husband. We love the character of this house, the warmth and the charm.” With the completed addition and other refinements Stillson made to the original structure, there’s even more to love.