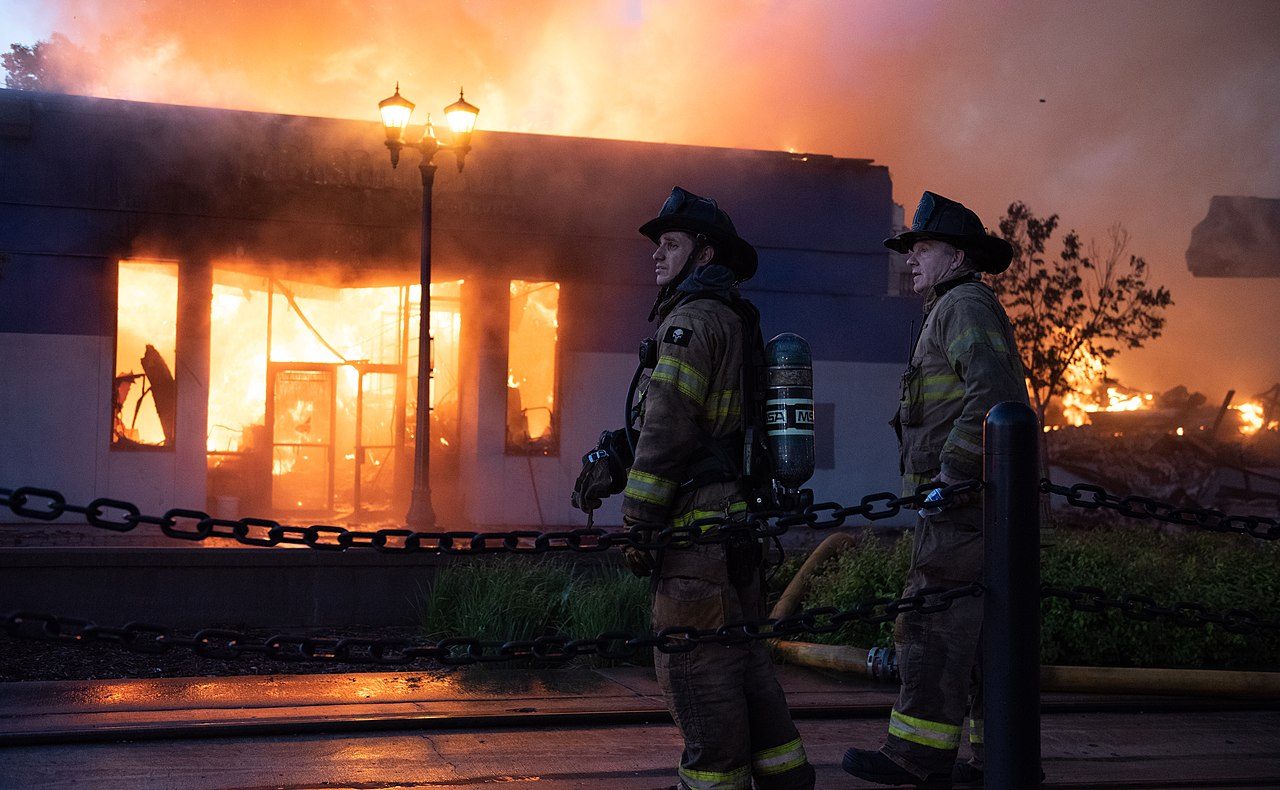 Firefighters in front of a burning building observing damage in Saint Paul the afternoon of May 28 2020 in the riots after the death of George Floyd. Source: Wikicommons

That said, those three years were bad. We were all just bumbling along, minding our own business, when really bad things began to happen. Let’s start with that appalling year, 2020.

COVID came out of nowhere (or so it seemed, it actually came out for China, of course) in the early months of 2020, launching what I’ll call The Evil Years. People, especially older and vulnerable people, began dying at astronomical rates. Vaccines came along quickly, thank goodness, or we’d probably all be dead, but despite the vaccines at least one million Americans have died so far.

And the deaths are only the tip of the iceberg – millions of people then got Long COVID and continue to suffer life-changing symptoms. Medical science has no idea what’s going on.

Almost as bad as the COVID pandemic was health-wise, the preposterous divisions the pandemic caused – or maybe just revealed – might have been even worse. I’ve written about the idiocy of all this in these pages (“Panic Is a Virus”).

It’s true that, as a percentage of the US population, the 1918 Flu Epidemic (sometimes called the Spanish flu) was more deadly: 675,000 people died of the flu in a population of about 100 million. But once the 1918 epidemic passed the US rolled happily into the Roaring Twenties, while we sunk into ignominy.

On January 16, 2020, Donald Trump became the third president in US history to be impeached, joining Andrew Johnson and Bill Clinton. Trump was eventually acquitted on both counts, but the trial explosively divided the country, with some believing that Trump had badly abused his power as President (by trying to convince Ukraine to investigate Joe Biden’s son) while others saw the impeachment as a show trial orchestrated by Trump-hating Democrats. Trump’s acquittal came almost entirely on partisan party lines.

On May 25, 2020 George Floyd died while being arrested by Minneapolis police on a minor charge. Outrage over the murder fueled support for the Black Lives Matter movement and led to mass protests in more than 2,000 US cities and 60 countries. By early June, more than 60,000 National Guard troops had to be deployed and more than 4,000 people were eventually arrested. Some cities tried to defund their police forces and more than a few cities continue to be in upheaval even to this day. Places that had theretofore been viewed as among the most pleasant places to live in America – Portland, Seattle, and Minneapolis, for example – became barely habitable. Companies, nonprofits, and political jurisdictions launched DEI (diversity, equity, and inclusion) initiatives. Racial and ethnic groups in America became more divided than ever, as many people believed the country was rife with systematic racism, while many others believed this was a wild overreaction to an unfortunate event.

Controversy over a “Stolen” Election

In 2020 almost 67 percent of Americans voted in the Presidential election – the highest percentage participation going all the way back to 1900. No election is perfect, of course, but this one seemed to be as fair as any. Yet Donald Trump refused to concede, claiming the election had been stolen. Trump was unable to prove any of his claims, but many Americans believed him, leading to yet more divisions.

2020 eventually ended, though none too soon. But only a few days into 2021 The Evil Years continued.

The January 6 Assault on the Capital

On January 6, 2021 a demonstration in Washington, DC turned into a riot which turned into a mob assault on the Capitol building. Congress formed the Select Committee to Investigate the January 6 Attack on the United States Capitol and the Committee interviewed over 1,000 people and poured over one million documents. Its final report, 845 pages long, was published on December 22, 2022.

We owe the Committee a vote of thanks for bringing to light what happened on January 6, but unfortunately the Committee was viewed by most Americans as being deeply biased from the beginning. Nancy Pelosi appointed seven Democrats and only two Republicans to the Committee, and both those Republicans had voted to impeach Trump and were viewed as traitors by the Republican Party.

The formation of the Select Committee was an historic opportunity to select a group of Representatives the American people would have viewed as objective – or at least that its membership was balanced – but the opportunity was lost. A Harvard CAPS-Harris Poll showed that 58 percent of American voters believed the Committee was biased, and a Pew Research poll found that only 11 percent of Americans said they were very confident the committee would be fair and reasonable. More division.

More than a year after it first appeared, COVID continued to stalk America and the world in 2021. The Delta and Omicron variants defied the vaccines and many people who were double vaxxed and boosted got sick (although their illnesses tended to be milder than those of unvaccinated people). By the end of 2021 more than 800,000 Americans had died of COVID.

Our Cowardly Retreat from Afghanistan

In the late summer of 2021 America abandoned Afghanistan after fighting the longest war in our history in that country. In very short order after we left, the Taliban destroyed the hapless Afghani military, took control of the country and imposed their harsh rule. Millions of Afghani citizens who had cooperated with the Americans were abandoned to their fate.

Frustration with the War in Afghanistan was understandable, especially given that the American military had been lying to the public about the war for years. But even so, a far more thoughtful and structured disengagement was possible. It didn’t happen, and millions of Americans were embarrassed and humiliated by their own country and its leaders.

We’ll continue with this parade of horrors next week.

Next up: Three Years to Forget, Part 2

Conspicuous self-promotion. I know that few people read poetry these days – especially contemporary poetry – but for those with a taste for such things, my latest collection, A Few Short Poems, is now available on Amazon.