The rear of the house features a free-standing screened porch that echoes the roofline, and decking that incorporates light and nature into the lower level—all designed by architect John Hegnes.

The woods of Fox Chapel hold many secrets—homes tucked away from view in settings so private they seem to exist as an extension of nature. The best of them take that into account, but none more so than the home purchased in 2009 by a downsizing couple. It sits on level ground in the front, but the landscape slopes dramatically in the rear, drawing the eye back into the trees that surround the property. 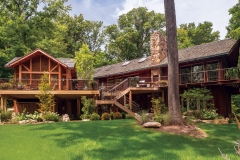 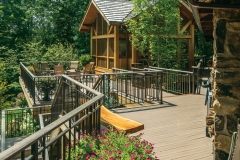 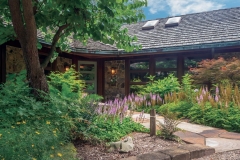 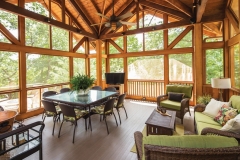 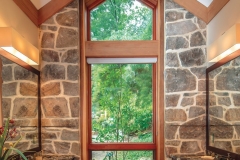 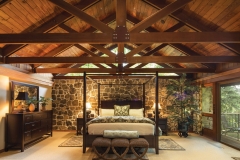 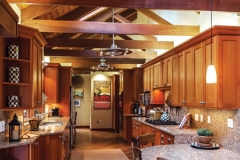 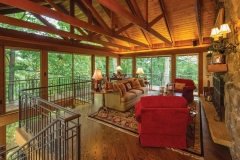 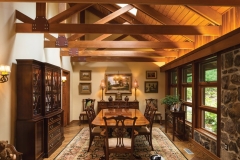 The home was designed by architect Joseph Berger in 1974 for himself. He moved his boat onto the property, built a full bathroom and lived onboard so he could oversee construction on a daily basis. Indeed, the workmanship is remarkable and the attention to detail a clear testament to onsite ingenuity. For the exterior, Berger chose redwood, both for its beauty and because it doesn’t require maintenance. And that was a top priority for the current owners.

“We wanted something smaller, all on one floor, that was easier to maintain. We wanted to scale down from the three acres of all lawn we had with our previous house,” says the wife. “We got a call from our agent saying, ‘The house dropped in price last night—would you like to see it in the morning?’ I was disappointed. It was overgrown, and the front wasn’t that attractive. But as soon as we walked in, it was a whole different house. It was like nothing I’d ever seen.”

The couple was struck by how bright the home was, with light pouring in from the skylights and the walls made of glass. There were views from every window—even the bathrooms. But despite its openness, the home felt private and secluded. As perfect as it was, the couple wanted to make a few changes to suit their lifestyle. They retained good friend, former neighbor and architect John Hegnes to help them and embarked on a project that would end up requiring three phases and two and a half years to complete.

The first phase was redesigning the master suite, which included building an addition to contain a separate bathroom (it had been inside the master bedroom) and closets. The second phase turned out to be more extensive. The home’s lower level, which opens onto the rear lawn, was unfinished space but quite large. The owners decided to finish it so they could have a large family room, guest rooms for their children and grandchildren and the husband’s office. Hegnes thought they needed a second stairway to access such a vast area, one a bit more welcoming than the utilitarian flight off the kitchen. He came up with a plan to replace the concrete block walls in the basement with glass walls that duplicated the ones above them. And then he cut a hole in the living room floor so an open flight of stairs and the two-story glass walls became an attractive design feature that let even more of the outside in.

“That was probably the most complicated and most expensive part of the project, but I think John did a really good job,” says the wife, who also has high praise for builder Jamie Glath, who oversaw all the carpentry on the house.

The third phase involved the outdoors. A small deck needed to be replaced, and the couple had always wanted a screened porch. But the view of the trees from the kitchen window was so lovely they were hesitant to give it up. Hegnes came back with a unique solution. Why not build a free-standing, screened structure? He placed it on an angle so the owners can look right through it, but he also situated the rooflines so that they could dash from the kitchen to the screened porch on a rainy day without getting wet. The structure is wired for sound, and a TV makes it a favorite place to watch football games.

Nature had taken its toll on the landscape, and the couple thought it best to leave the trees and mulch the shaded areas around them. That’s how they found Tom Lisowski of Lisowski Tree Service and Landscaping, a “landscape artist” who came highly recommended in part because he had the equipment to spray mulch over large areas.

“Tom loves doing wilderness, very natural, woodsy looks. We just hit it off right away. I learned very quickly what I didn’t know and what he did know,” the wife laughs.

Lisowski’s idea was to marry the house to the woodland setting. “I naturalize all my landscapes with big boulders rather than any vertical or horizontal walls. There were natural outcroppings of rock on the property, and we tore down any manmade objects. Even though the house is well-wooded, there were some larger trees that were beyond their prime. I always tell people destruction before construction! A good tree becomes a better specimen and a bad tree becomes a bigger problem.”

Using top rock from northern Butler County and Maryland flagstone for the stepping stones, Lisowski created a freeform feeling that belies the planning and work that went into the project. A retaining wall made of giant boulders is especially impressive, with moss and other flora calling it home. With the trees thinned out, Lisowski insisted on creating a lawn so the grandchildren would have a place to play ball or pitch a tent. The owners are now delighted their objections were overruled. Working with Hegnes, who designed a triangle-shaped cutout in the deck to let light into the lower level, Lisowski planted a large Armstrong red maple before construction began. Finally, he created a garden of perennials in the front of the house to provide continual color and textural interest.

“This house changes with the seasons,” says the wife. “It’s as beautiful in the winter as it is in the fall when the leaves turn all those colors and the house glows, but I happen to love the summer, too. The house was pretty special when we moved in. We just tried to maintain its uniqueness. Our motivation was to downsize and we ended up almost doubling our space. We went from 4,000 to 7,600 square feet. Our friends say we lied! We have lived in nine houses, and this is definitely my husband’s favorite. We love the house, but we feel we’ve been the beneficiary of a lot of other people’s hard work and talent.”