Boxwood, peonies and other seasonal flowers grace the gardens of this charming Tudor-style cottage built in 1925.

Tucked into a hidden corner of Squirrel Hill is a house that looks as if Cary Grant should step out of the front door, the star of a romantic comedy set in the Cotswolds. It oozes charm from every leaded window, and every window box. Built in 1925, it has a come hither look that swept its owners off their feet when they first saw the house six years ago. 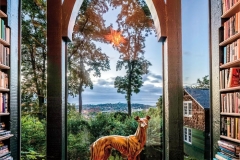 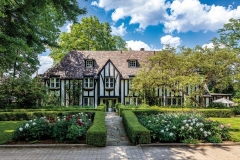 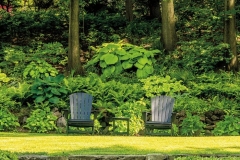 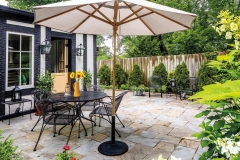 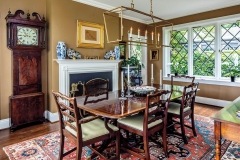 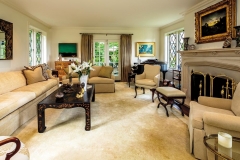 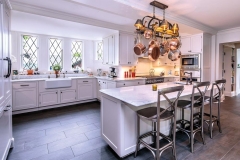 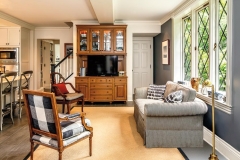 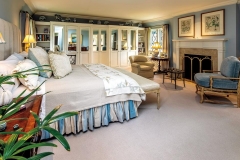 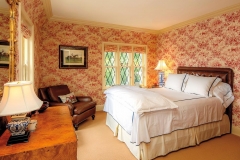 “Frankly, having lived in Pittsburgh all my life, I never knew this house existed,” says the lady of the house. “We pulled up in the front with the real estate agent and it was love at first sight. We liked the look of the exterior—sort of an English cottage, very romantic looking. And it’s very secluded for being in the middle of the city. We both felt at home. We forced ourselves to look at other houses but the same day we came back to this. It was an impulse buy.”

The house they saw is a far cry from the one they live in today. The extensive gardens were overgrown and often overshadowed by trees that had grown greedy. Stone paths had crumbled or were hidden beneath vegetation. Walls threatened to collapse and had to be rebuilt. And that was just the outside. What wasn’t apparent until the couple went inside was the spectacular view of the city. The house is perched high on a hill, with sweeping vistas as far as the eye can see.

“Walking in the front door and seeing that view—we could only imagine what it looked like at night. That’s when it’s really fantastic. We bought the house and renovated, starting on the third floor, and we lived up there for a year while we finished the rest of the house. I’ve counted 15 church steeples from the windows. Having that expansive view from the third floor made it so much more livable,” she says.

The home stretches horizontally across the edge of a terraced bluff, and perhaps to take advantage of the view, is only one room wide. Though it has all the trappings of a Tudor—a timbered and stucco exterior and those leaded panes— windows on both sides of each room let in lots of light. When asked after they bought the house if they needed to do anything to it, she said yes and simultaneously her fiancé said no. And so began an extensive renovation.

“Having redone older homes before, we knew what we wanted for the way we live. The kitchen area was probably the main change we made to the structure—there had been three smaller rooms, the kitchen, powder room and a little den. We opened them all up, removed load-bearing walls, put in a steel beam and created a new kitchen with the living area. Beyond that we built an addition with the bar, pantry and laundry and mud room and another entrance to the house.”

The couple brought in the same team that had worked on the woman’s previous home, what she calls “the dream team” of the late architect Tony Stillson, interior designer Mikell Schenck and Dick Building Co. as the contractor. The first step was updating all the lighting, adding a sound system, refinishing all the floors and in some cases, replacing them. A back staircase off the kitchen was unearthed, making a trip to the new laundry and utility room an easy trek. The windows, which are original to the house, were repaired or in some cases repurposed, and extraneous doors were removed to open up the space.

Another renovation project was undertaken on the second floor, where Stillson reconfigured the hall to make room for an expanded master bath with a generous shower. A small bedroom adjacent to the bath became a den and his closet, while hers was fronted by a row of mirrored doors in the master bedroom. Inside her closet a small window was uncovered, and the couple added a window seat beneath it. “The grandchildren use it for staging fashion shows in the closet,” she says with a laugh.

Furnishing the house turned out to be a breeze, with many items including two large wooden cabinets in the kitchen seating area, able to transition from the owners’ previous homes. Since this was their first home together, a bit of juggling went on. His bronze dog won a prime spot in the entrance hall. Her living room made the move almost intact.

“Mikell had done such a beautiful job at my old house, and she was expert at taking things from that house and reconfiguring them for here. We used the same drapes in the bedroom, the same paint colors, all the same furniture from my living room. We had worked very hard together on the previous house and I only lived there five or six years. I haven’t changed my taste.”

The outside is a different story. Though the couple has worked together to reclaim the gardens, he is the one most often covered in mud, especially all weekend. He even installed a shower in the garage—along with a man cave of tools—to wash off the first layer of dirt. Years of neglect caused the gardens to be overgrown, and a huge sugar maple was removed to create a rear patio. Extensive stonework was repaired and a side patio was extended and enhanced with a water feature. Now it’s the setting for dinner parties or a quiet cocktail under the covered porch.

“This is my favorite house ever—a sweet romantic home,” the lady says. “It’s old and quirky and it’s never going to be perfect, but we embrace the imperfections. It’s scaled very well for two people but also wonderful for family. And it easily expands to accommodate entertaining, which we love to do. We cherish the seclusion—we have no street frontage so it’s extra private and quiet. We have all the conveniences of being in the city, yet when we pull in the drive we kind of go ‘Aaahh, paradise here.’ ”