by Stuart Sheppard
The Hamlet Machine 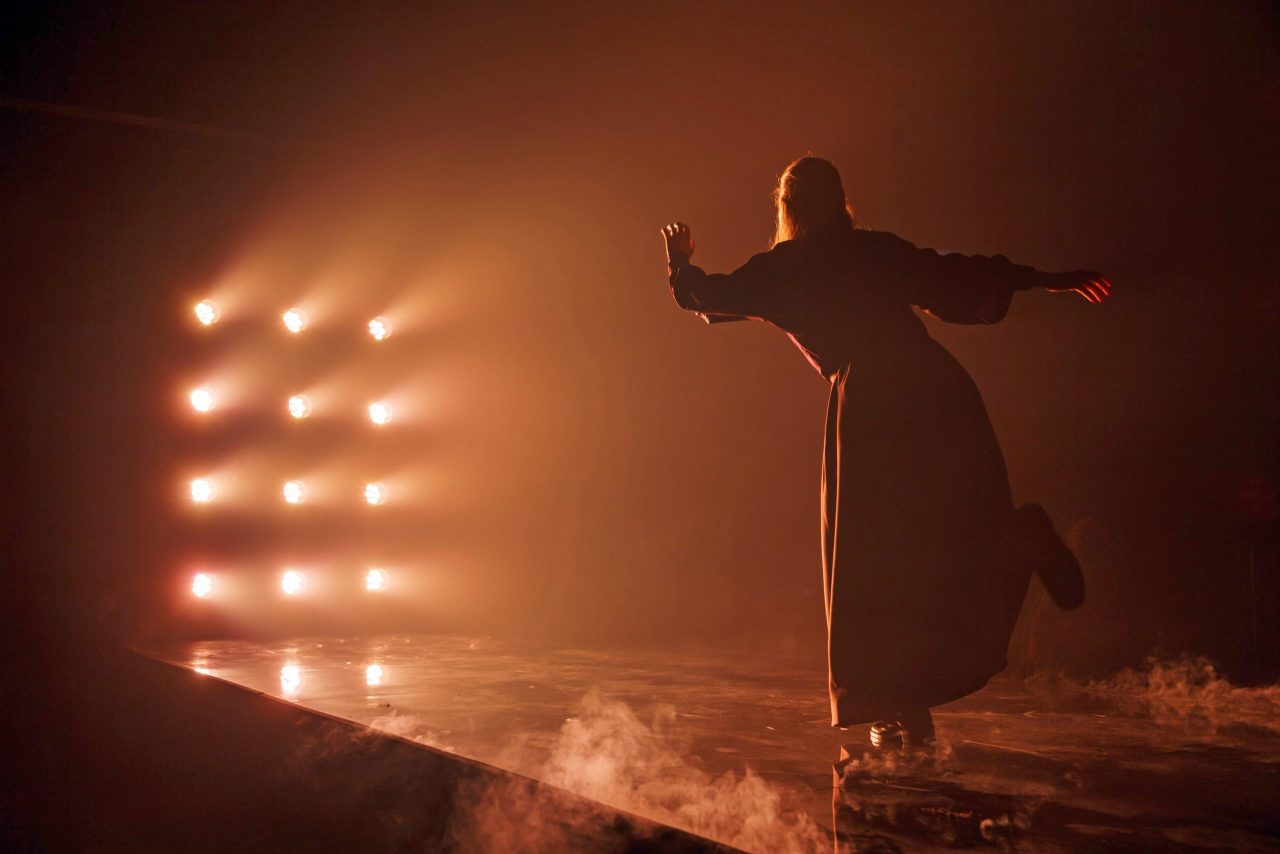 In speaking of opera, French composer Claude Debussy praised what he termed “music that’s lit from within,” and this might be the best way to describe Pittsburgh Opera’s world premiere of “In a Grove,” a phantasmagoric reinterpretation of the eponymous story by Japan’s great modernist writer, Ryūnosuke Akutagawa.  The original narrative, published in 1922 — the same year as James Joyce’s “Ulysses,” — is a cubist exploration of memory, or what we might today call subjective experience, cast in the form of a murder mystery, and stands as one of the defining short stories of modern prose, with its stark simplicity and iconoclastic style.

Composer Christopher Cerrone has created a score that inherits as much from Debussy’s ethos, evinced by his own opera, “Pelléas and Mélisande,” as it does from Brian Eno’s atmospheric electronic music – resulting in a work that melds the scintillating tones of woodwind and string instruments with the crepuscular thrum of ambient digital technology.

The production begins in darkness and never really leaves the realm of a dream state: the performers step into fluid shafts of illumination like iridescent fish flashing in the murky depths of an aquarium.  Set designer Mimi Lien utilizes a runway-style stage that bisects the audience – which sits on tiered seats level with the performers — suggesting an ancient Greek, chorus-like mise-en-scène, as you’re watching faces watching the action, not just the actors performing the action.  It’s a risky but brilliant conceit and, it works especially well in this story which is one long series of confessions; you can’t help but feel as if you’re part of a jury with all those eyes witnessing what you’re witnessing, instead of just being an isolated soul staring at actors on a proscenium stage.

Hanging from the ceiling is a long, transparent barrier-cum-window which moves from its position dividing the performance space to the left and the right like the drop of a guillotine blade frozen in time.  It produces a menacing feeling as it literally cuts into the seating area with the determination of a slow-motion glass knife.  I won’t even try to interpret what this set device means but that’s the fun of post-modernism: anything goes.

The four performers play two roles each, and you can tell when they’re switching not just from their nimble costume adjustments often done in situ – the hat handoffs between characters are slick – but by shifts in both the melodic and electronic progressions of the music.

Composer Cerrone isn’t just writing for voice and instruments, he’s also scoring the treatment of those elements, through the use of reverb, echoing, and a host of audio modulation devices (think of a composer like Pat Metheny, with his array of guitar pedals and synthesizers).  And this, combined with the lighting, staging, special effects, and costumes is what makes “In a Grove” not just an operatic experience, but a synesthetic revelation.

When this story was produced as the film “Rashomon” by the Japanese director Akira Kurosawa in 1950, he used the trope of rain to provide the context for how memory is affected by the human machinations of greed, lust, acrimony and revenge.  In this production, director Mary Birnbaum and Librettist Stephanie Fleishchmann utilize smoke, setting the action 100 years ago in a burned-out forest in Oregon, with the stage actively smoldering, until at the end, we are literally enveloped in fog.

This plays well with the ethereal lighting design by Yuki Nakase, who transports us from this despairing, Beckett-like landscape, all the way to moments that could be in an Alexander McQueen runway show.  And speaking of fashion, Oana Botez’s costumes project a dystopian elegance that is part THX 1138, and part retro-Portlandia.  And it works.

Every vocal delivery in this opera is really a duet, not just with the other voices, and the instruments, but with the acoustic treatment of the singer’s output which may affect volume, pitch, and modulation and provide multivarious colorings.  As we listen we must ask, where does the vocal expression end and the digital embroidery begin?  Or are they merged continuously?  And more important, does it matter in this era when the demarcation between natural sound, and treated sound, has so blurred?  Reverb, synthesizers, and Auto-Tune have become such the norm that when we hear pure, analog delivery it almost feels naked.

The four performers understand this: their respective deliveries are skillfully nuanced to prevent aural overload in such a small space with perilous acoustics – they’re singing in a brick-lined factory, not Carnegie Hall – via microphones with tremendous power.  And with the striations of sound produced by the nine-person orchestra — conducted to mesmerizing effect by Anthony Walker — not to mention the cloud-like overlays, Yazid Gray, Chuanyuan Liu, Andrew Turner, and Madeline Ehlinger never have the luxury of just performing in isolation as most actors and singers do, but as components of something larger and selfless – constituting, ultimately, a kind of sublime gestalt.

Ironically, as there is so much embellishment to the sound of this production, the acting style is underplayed, and this is another strong artistic choice by director Birnbaum.  The characters live in the kind of flat emotional interiority typically found in the films of Robert Bresson – for example, “Diary of a Country Priest” — not the heightened gesticulating archness of classical opera.  And this is entirely appropriate for a tale of such Zen-like intensity, which centers on the issue of morality, made all the more remarkable because the characters are offering confessions, not denials.

The only aspect going against the grain of this dynamic is the libretto, which wants to move certain things in a direction never intended by the original story.  The lyrics (which are sung in English, and projected overhead in English, too), offer a lot of unnecessary explaining, especially the extraneous addition of a heart attack to the dead man.  And some lines just fall dead themselves, such as “Silence is the sound of a heart / growing cold” which are repeated like clichéd poetry.

Perhaps Debussy put it best when he said the ideal librettist “is a poet who deals in hints,” and one could say that this is how composer Cerrone has written the music for this remarkable opera.  It’s an innovative work of transcendence that will reward any aesthetic sensibility — whether classical, modern, or futuristic.
IN A GROVE runs through March 3rd.  Bitz Opera Factory, 2425 Liberty Ave. Tickets $25 – $50.   www.pittsburghopera.org,  or 412-456-6666 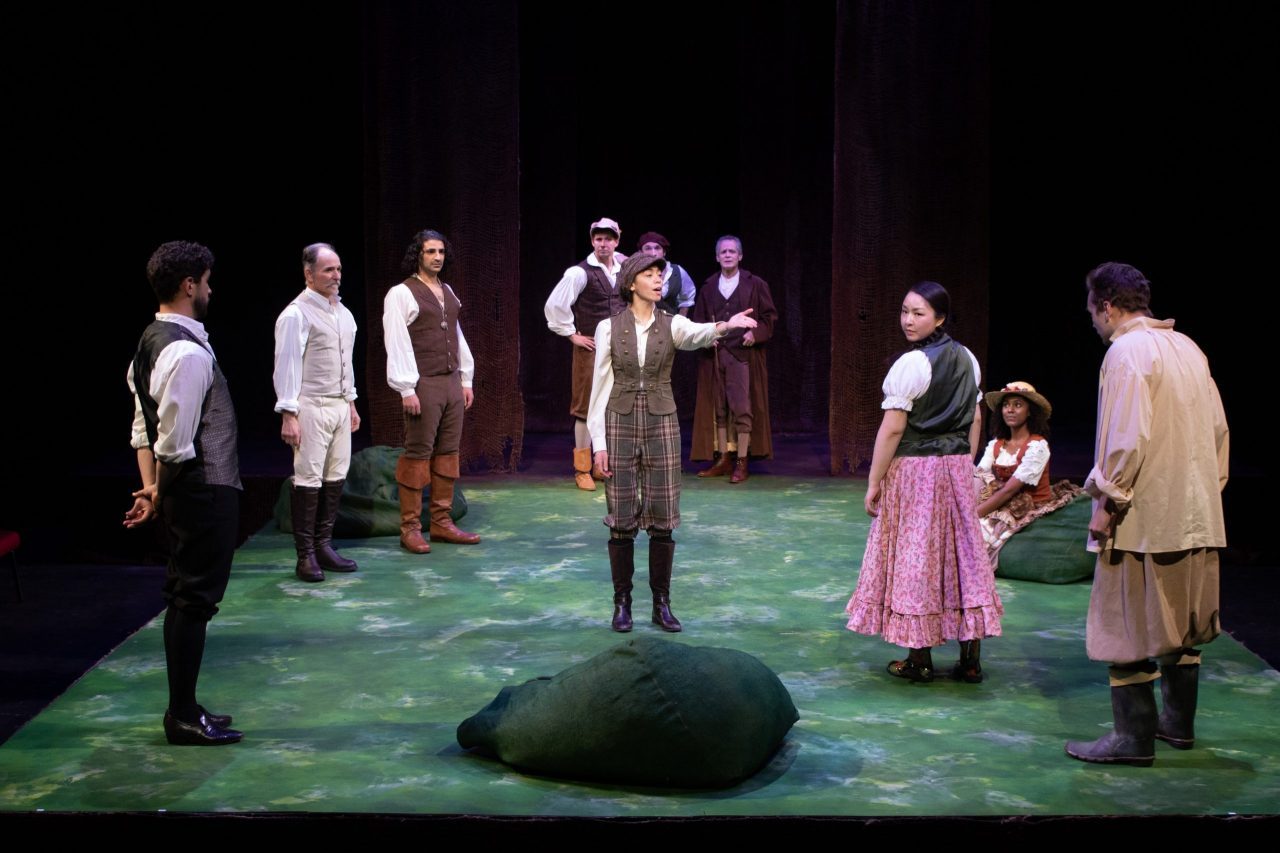 George Lange: Through a Joyful Lens