by Stuart Sheppard
The Hamlet Machine
Photo by Heather Mull 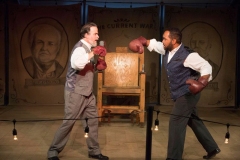 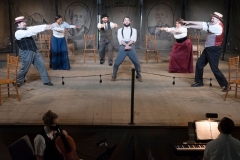 Theater, unlike virtually any other art form, requires an audience comprising multiple individuals, while the definition of plague is “a widespread affliction.” To perform a play people must be gathered together, and in order to spread, a plague requires the same kind of human congregation.

William Shakespeare was born in a plague year, 1564, and fortunately, baby Will survived, while two of his siblings did not. His productions, and his theaters, would be shut down quite routinely during plague outbreaks for the rest of his life.

The agon of theater and plague is ancient, warlike, and constant to this very day. After 2,500 years, with all the advances in science, technology, and medicine, nothing has really changed. We are still publishing treatises titled with the same ancient Greek expression, “epidemic,” and our theaters are still shut down whenever plagues appear.

So it is ironic that the first live play performed in Pittsburgh since the inception of the current world-wide epidemic is an agonistic work from Quantum Theatre called, “The Current War,” focused on the issues of science and technology, and adopting the motif of boxing as its defining trope.

The book, music, and lyrics of this compelling work are all by Pittsburgh native Michael Mitnick and, if the title seems familiar, he was also the screenwriter of the 2017 film by the same name. However, the project started years before as a musical during Mitnick’s time at drama school, and you can sense in the organic dialogue, nuanced lyrics, and contemporaneous musical style the deep research he has done to achieve its historic authenticity.

Ostensibly the story of the struggle for dominance over the electrical industry in Gilded Age America between celebrated inventor Thomas Edison and Pittsburgh upstart George Westinghouse, “The Current War” is less about technology and more about morality. Mitnick’s brilliance lies in how he does not bore us with the mere scientific record of the two competing systems — Edison’s direct current (DC) vs. Westinghouse’s alternating current (AC) — but rather how he explores the obscure but scandalous and harrowing depths the former inventor resorted to as he tried to discredit the latter. And the production achieves this without pandering to sensationalist depictions of the many animal, and ultimately human, experiments that resulted in the death of its subjects.

Mitnick is a gifted lyricist not just for the acuity of his rhythm and meter, but for the choice of his words, finding rhymes that are not predictable, and expressions that are not anachronistic. Take, for instance, the opening lines of the jaunty, “Start Again” sung by Edison’s assistant Francis (Quinn Patrick Shannon), who explains his boss’s work ethic to a reporter:

NICKEL AND TIN?
MY PHI BETA PIN?
THEY DIDN’T WORK START AGAIN
PLATINUM HE TOSSED
BECAUSE OF ITS COST
THOUGH IT’LL GLOW, START AGAIN

Or this, from “A Better Mousetrap,” sung by the dentist Alfred Black (Tru Verret-Fleming), who represents a commission investigating alternate forms of capital punishment:

AND BOILING AND BURNING AND BREAKING ARE WRONG
THEY’RE TORTUROUS TACTICS THAT TAKE FAR TOO LONG.
THE PIT AND THE PENDULUM PROFITED POE
BUT THE PLOT PUT IN PRACTICE IS PAINFULLY SLOW
THOUGH DEFENESTRATION HAS SPEED I ADORE
IT FAILS IF THE BUILDING HAS ONLY ONE FLOOR

Edison is played by Daniel Krell, who brings out the nefarious core of the inventor’s nature without rushing into it; he instead lets it evolve, as it did over the 13 years comprising the action of the play, commencing in 1880. His Edison starts as a well-meaning scientist bent on furthering society’s technological advancement, until his soul is swallowed by his egotistical need for dominance in a winner-take-all battle with his chief nemesis, Westinghouse. It would be easy to portray such a man as a fiendish cartoon, but we see a more Freudian unspooling of his maniacal, robber baron ethos, which we can relate to as an archetype of the modern, rapacious tech billionaire. This adds another layer to the story’s richness.

Billy Mason depicts Westinghouse as the Manichean opposite of his rival: he imbues George with the kind spirit of a family man, who is beneficent to his employees, and has such an egoless character that he will insist upon having all his papers and photographs burned when he dies. That we know much less about him than Edison gives Mitnick the playwright and Mason the actor the opportunity to explore his life with creative license, and makes the revelation of his actions all the more compelling.

Director Tomé Cousin employs low-tech, allegorical representations through puppetry, shadow projections, and DIY assemblages — much like the innovative work of Pigpen Theater Company, also rooted in Pittsburgh — to convey the horror of some of Edison’s more gruesome electrical experiments on animals, including dogs, horses, and elephants. This enables him to tell the unsavory story of one of America’s most famous inventors without dampening the spirit of the play’s musical form, or creating a false disparity between the historical and the theatrical that would result in kitsch, or even worse, something very distasteful to watch. His choreography is kinetic and alive with jazz hands.

Were it not for the pandemic, “The Current War” would have been presented in two acts, but in this version it runs straight though for nearly 100 minutes, elongating the arc of the action and impacting the development of the third key character, William Kemmler. Kemmler is a notorious murderer, but is played so subtly by Jerreme Rodriguez that he looks like he wandered into the theater from a production of “Jesus Christ Superstar,” where he was supposed to portray Christ. Through Edison’s diabolical machinations he ends up becoming the first person in history to be executed by the electric chair. That playwright Mitnick gives him a foundational role as a kind of sacrificial daemon between the industrial gods and the public is an inspired swerve, and the Passion-like intensity Director Cousin elicits through his denouement is sublime.

Scenic designer Tony Ferrieri utilizes a dirty, sepia mise-en-scène to cast us into the late 19th century. Although this conceit — mimicking the quality of the film stock of that era — is effective, it’s not stunningly original. However, the spareness of the set and the transformation of the stage into a boxing ring with ropes does effectively underscore the show’s pugilistic theme.

To be fair, I don’t mean to be overly critical of the technical aspects of this production. The crew had to deal with all the current pandemic restrictions, including performance in an open-air tent, spaced seating, very constrained rehearsal protocols, time limitations, ticketing strictures, and countless other obstacles that I’m sure were very difficult to navigate.

Todd Brown’s lighting, Steve Shapiro’s sound, and Karen J. Gilmer’s costumes coalesce to evoke an authentic period aura. And special praise should be given to the band, consisting of a mere two players — Douglas Levine on piano and Simon Cummings on cello — who fill the performance space with the resonance of an orchestra. Also in the cast are Melessie Clark, Conner McCanlus, J. Alex Noble, and Drew Leigh Williams, all excellent in their various roles as actors and singers.

See this play for the music, for the acting, for the creative effects and direction, but most of all see it to joyously affirm the triumph of theater over plague, once again.

Karla Boos: “All the World’s a Stage”