What price beauty? When one lives in a house designed by Richard Meier, the costs are as monumental as the Pritzker-Prize-winning architect’s international reputation. 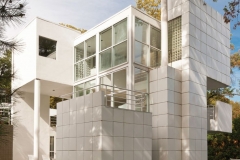 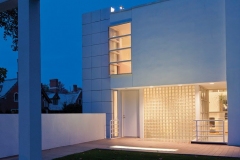 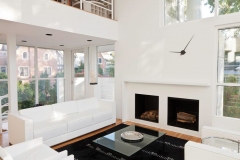 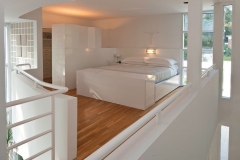 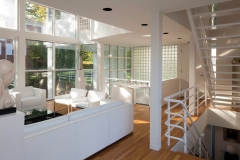 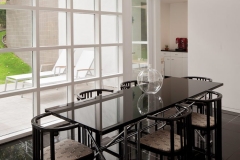 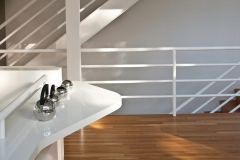 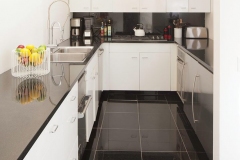 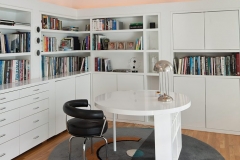 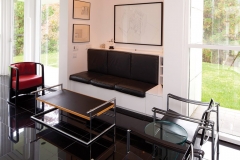 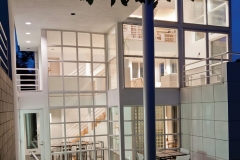 They aren’t measured in terms of dollars, but rather in a commitment to the ideals and vision that have driven Meier to create stark, modern structures of every size for more than four decades.

Frank Giovannitti and his wife, Colleen Hess, are avowed minimalists who happily forgo the clutter and decorative turbulence that invade most homes. When the sun beats too strongly through the three-story glass windows of the residence Meier designed for them, they press a button and an electric shade descends from a slot in the ceiling. Privacy is exchanged for light; convenience is secondary to line and pattern. The accepted notions of what constitutes comfort are challenged by the sleek cube they have called home since 1983. That’s when the residence was finished, more than three years after building began on a sloped site in Squirrel Hill. “We were looking for a modern home to buy in Pittsburgh but it just didn’t exist,” says Giovannitti. “I bought the land from the Laughlin estate—it was the grounds—and we subdivided it into five lots. I was going to do a who’s who in modern architecture, but this was during the Carter administration. The interest went to 22 percent at one point, so nobody wanted to build a house.”

Giovannitti sold the other lots to finance his new home, and it was mere fortune that Robert Venturi was retained to design the house next door. As Giovannitti was interviewing local architects without success, his mother-in-law stopped by with a magazine that featured a home designed by Meier.

“We both fell in love with it,” he says. “I called Meier and he said, ‘come up to New York,’ and we did. He took us to a number of houses in Connecticut. He interviewed us, and we interviewed him, and we knew he was the right architect. We signed the contract and it began.”

As they met with Meier in his office, Giovannitti would look out the window to a penthouse on top of a neighboring building. That became the couple’s inspiration, and they asked Meier to build them a penthouse on the ground. “We wanted a house for a married couple that likes to entertain. That was our plan,” Giovannitti recalls. Every week the couple would return to New York to see the drawings, to refine their wishes, to inspect the models and finally, to return with the finished plans. The signature touches that Meier has employed throughout his career—he has designed the Getty Center in Los Angeles, the Barcelona Museum of Contemporary Art, International Coffee Plaza in Hamburg, the Meier Tower in Tel Aviv and City Hall and Central Library in The Hague—are all present. Yet it is in his private residences that they are more easily seen and understood: the geometric lines paired with sensuous curves, a predominance of glass, the tubular railings, open floor plans and iconic “tiles,” and above all, an abundance of white and light.

Construction began on the 30-foot by 30-foot structure, with Michael Palladino as the project architect and Giovannitti serving as general contractor on the 3,000-square-foot house. Though the home is not large, building it was an involved process primarily because Meier’s design employed so many different materials. For example, the white panels that form a “skin” on the home are made of porcelain-clad steel. Each panel had to be custom-crafted so they could fit together like the pieces of a puzzle, with a different drawing for each panel. “They had to be perfect,” Giovannitti notes.

Though the lot on which Giovannitti chose to build is closest to the street, he loved the idea of the house cascading down the small hillside. Meier agreed, but the location presented an interesting challenge for the architect. “Most of Meier’s homes are built in very secluded areas or on the water,” Giovannitti says. “One of the issues that came up was that we were on a very public street. He was doing some work in Paris, and those electric shades were used on the outside of a building, in part to control the heat loads, and as the sun moved around the building the computer-controlled shades would drop. He ordered them, and we used them inside the house. They have lasted 25 years now without a repair.”

The three-story house was designed for both entertaining and privacy. The kitchen and dining room are on the first floor, with a guest area that can be completely closed off from the rest of the house. It’s the farthest point from the master bedroom on the third floor, an important consideration in a home that is so open. When not in use, the guest quarters function as a family room or den. After dinner, the party can move to the second level, which contains the “formal” front entrance and a large living room. Stairs continue to the third floor, where the bedroom and bath anchor one end and a small study completes the private area. Because the residence is fitted into the hill in an urban neighborhood, the views that inform so much of Meier’s work are limited. And yet he was able to create a feeling of outside space by using the slope as a shield and positioning the most open parts of the house toward the greenery.

“We’ve had as many as 100 people in for parties, and guests would go from the first to the third floor and communicate with each other, see each other. People can spill out onto the terraces. It’s just a magnificent home to entertain in.”

Giovannitti says people ask him all the time what it’s like to live in his Richard Meier house. Meier himself says that light “bounces around to give it that distilled yet brilliant quality.” And that is Giovannitti’s response as well: light, light, light.

“It’s fantastic, so beautiful,” he says. “You watch the seasons change, the time of day change. The house is a canvas, the palette is light and the artist Meier. It’s never white. Nature paints it different colors every hour of the day. I was always a patron of modern art, and modern architecture is art and sculpture. If it’s good, it’s a good piece of sculpture. I think I’ve created something that the city is beginning to appreciate, and as years go by, places like this house and the Gropius house down the road will be destinations for Pittsburgh.”