Half of the charm of a new home in Sarver is getting there—it’s a 25-minute drive north from Fox Chapel, where the owners used to live. 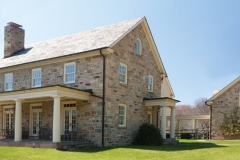 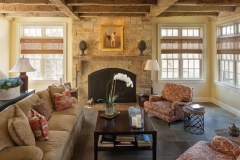 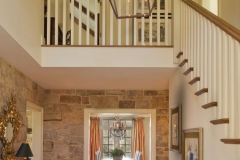 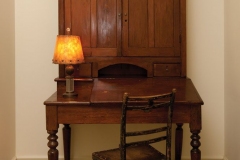 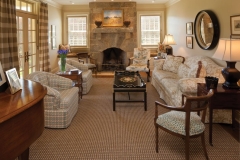 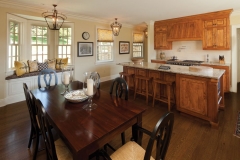 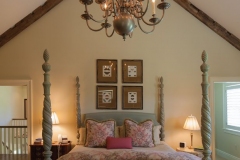 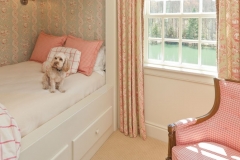 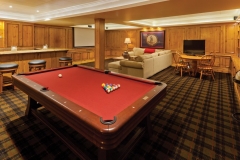 This stretch of Route 28 is downright bucolic, with hilly vistas, pretty pastures and none of the traffic that has given other parts of the highway a bad reputation.

Just when it begins to look like pure country, the exit looms and the roads change to sleepy blacktops. It is off one of these that the husband found 60 acres of dream land, complete with a large pond. Though the wife had been content on their three-acre plot, she had to agree the land met the criteria she had inadvertently assembled over the years. First, it wasn’t as far as Ligonier, an early destination that her husband had threatened. Second, the drive was virtually light-free, unlike busy Route 8 on the way to Butler. In exchange for the distance, the family would have incredible privacy and beauty. Most important, they would have the opportunity to build the house they always wanted, from scratch.

“I showed my husband a picture of the kind of house I wanted and said, ‘This is what I’m thinking.’ I didn’t want a typical country farmhouse. We both wanted stone, and we wanted it to look like it had been there a long time, like someone had added on to it through the years. We had lived in Fox Chapel all those years and wanted something more casual.”

Choosing to build gave them the best of both worlds. They could have a house that looked and felt old yet was designed for modern living, with all the amenities to go with it: ample storage, a family entertainment room with a giant movie screen, billiards table, bar and “hidden” wine cellar, a large kitchen, multiple baths, cedar closets and an exercise gym.

But the house is not about bells and whistles. Indeed, the first thing a visitor notices after pulling into the long gravel drive is the welcoming aroma of a wood-burning fire. It wafts through the air on a chilly day, perfectly accenting the first glimpse of the sandstone residence. It sits with quiet majesty on a small hill overlooking the pond below and the woods beyond. The main stone structure is almost Shaker in its simplicity, with a stone terrace across the rear and a side porch that could star in a western.

The clapboard annex on the other side contains the children’s bedrooms, family room and utility areas, including a pantry and laundry room. A small covered exterior path leads to the guest house, with the garage and small barn beyond. Right next to it sits the wood stove that keeps 700 gallons of water at an average of 165 degrees, heating the house via underground pipes and providing the home’s hot water. The stacked logs, cut down as part of tree management, are as big as telephone poles.

“The property is so pretty,” says the wife. “We were very aware of wanting the views to be taken advantage of as much as we could with a traditional house. And we wanted this porch—it’s on the east side so you can sit out there during a thunderstorm and it’s shady in the afternoon.”

Peter Perkins was chosen to build the home because of his reputation for high-end residential projects that often use reclaimed materials. He had also worked with the wife before and being on the same wavelength made much of the process an easy collaboration. Take the two-story entrance hall, for instance.

“We used the foundation stones from the house we tore down for the stone walls in the hallway,” says the wife. “I had seen it in magazines, and I said to Peter, ‘Let’s use it.’ When the woman who owned the house that had been here came back to visit she was touched that a part of her home was inside.”

Quarter-sawn red oak floors dominate, though the family room has bluestone that is “perfect for all the animals, and warm because of the radiant heat.” Wood cabinetry, paneling and furniture by XYZ Custom on the North Side is used throughout the home, with the clear pine cabinetry in the kitchen pickled with black. The lower level entertainment room is knotty pine, glazed to add depth and richness.

Against this somewhat rustic backdrop, the owners’ furniture from Fox Chapel seemed rather formal. Yet they had enough to furnish the house, and it was perfectly good. Janet Hellberg and Betsy Deiseroth, partners for 13 years in Wellie Interiors, simply incorporated everything into the new floor plans, re-upholstering as necessary and designing the rooms around what existed. The dining room was even painted the same color it had been in the old house, but in other cases things were re-purposed. Two large Audubon prints went from the study to the family room, and the Wilton rug in the living room made way for a relaxed sisal.

Subtle colors are used throughout the home so as not to compete with the views from the many French doors that lead outside from almost every direction, or with the stone. Sherwin Williams Classic White, a deep ivory, covers all the trim and enhances the hues in the stone hallway. Creamy taupes elsewhere create soothing transitions between rooms and highlight the patinas of numerous antiques and the gilt frames of paintings.

It took a year to complete the project, and refinements are still being made. But the family has settled in to country life in the best sense of the word. Everything they need is right at hand. And even the commute has proven to be a bonus. “My car has become my traveling office,” the wife jokes. “I make all my phone calls while I drive.” When the Route 28 construction is complete, the total commute to Downtown should around be 35 minutes. With its beautiful rolling hills, streams and mature woodlands, the husband quips, “this area will be the next Fox Chapel, but nobody realizes it… yet!”