A Noguchi lamp and gray B&B Italia armchairs are placed on a vintage Turkish rug, all from Weisshouse. The haunting series of self portraits painted from the 1950s through the 1970s by an artist named Liptiez anchor the wall in Stacy Weiss’ loft and are among her favorite possessions.

When you have access to just about everything in the world of style and interior design, falling in love can be difficult. The sheer volume of merchandise, coupled with the insatiable hunger for the newest trends that drives the home furnishings market, could easily overwhelm an ordinary person. But Stacy Weiss is hardly ordinary. As the owner of Weisshouse, she has spent 30 years canvasing every part of the business, searching for the rare, the beautiful, the timeless and the cutting edge. 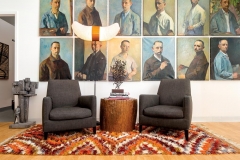 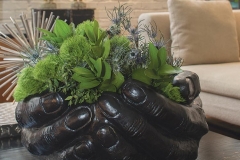 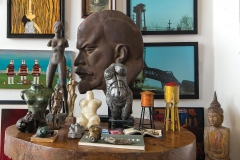 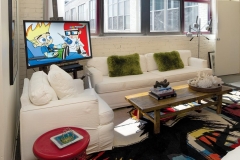 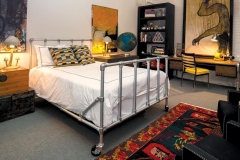 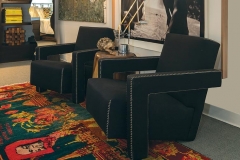 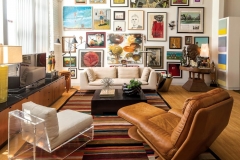 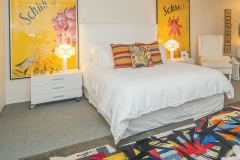 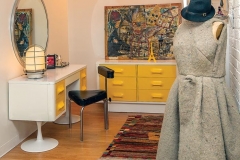 Along the way, she has lost her heart more than a few times. What’s surprising is how faithful she remains to each love. “My home is kind of an extension of my store. It’s the very curated end of my store. In the store things go in and out, but in my home, they generally stay. The rug I’ve had for 25 years, and the sofa is 15 years old. Here, things stay in the same place. I’m not big on rearranging,” Weiss says with a laugh.

But with the children grown and gone, Weiss made the decision to sell her large Squirrel Hill home, forcing a major upheaval. “I was looking for something to renovate, a new project. That takes time, so I rented. I looked into this space and instantly fell in love with the high ceilings, the open spaces, and the fact that it was on one floor, something I was looking for after the kids left.”

The airy loft in Shadyside had huge windows and a flood of natural light, which the white-washed brick walls enhanced. The downside, of course, was that Weiss was not able to make any structural changes in the two-bedroom, two-bath apartment. The bath fixtures were dated and the kitchen was small, so her design philosophy became centered on accentuating the positive. The size and layout meant the loft could accommodate her furniture, rugs and most important, a substantial art collection.

Weiss bought her first painting at the age of 6—a Lori Hornel purchased with the encouragement of her parents. Weiss’s mother was a docent at the Carnegie Museum, and her father painted for pleasure. Summers were spent in Provincetown, where the thriving arts community included people such as Robert Motherwell. After majoring in psychology at Pitt, Weiss studied photography at Pittsburgh Filmmakers and went on to start the Blatant Image photo gallery in Oakland.

“What’s so great about the high ceilings was that I could condense my art and cover a wall with it,” Weiss says. “There are two things that honed my eye. One is photography—it makes the eye focus. The other is, as a child we would walk the beach in Provincetown looking for stones. We would scan and our eyes would hit on something. That’s what I’m able to do at these shows—scan around and hit on something, the diamond in the rough. I’m a glorified picker.”

Moving a house into an apartment required some downsizing, but it provided Weiss with the opportunity to see her possessions in a fresh way.

“Even in the store, when we do a floor move, people will say, ‘Is that new?’ No, it’s been here, but in a new environment you definitely see things in new ways. My taste throughout the years has kind of remained the same, but it’s always evolving. Being in this space made me edit because it’s much smaller.”

Her goal was to keep the eye on the main spaces rather than the finishes. The distractions are abundant, from a colorful Virgil Cantini wool rug to a kitschy Broyhill vanity, a Ralph Lauren Home Lucite chair prototype that was never produced, a Christo photo collage that was a wedding present, and numerous collections that are displayed as tableaux throughout the loft. Weiss particularly loves vintage pieces, such as the old leather chair and ottoman she inherited from her parents: “The patina on things and finding these one-of-a-kind, slightly beaten- up pieces from a different era.” She laments the fact that many “vintage” pieces today are new, made in China. But, as a picker, she is constantly on the prowl for the truly unique, the whimsical or the quirky. Not bringing it home is less of a challenge than one might think.

“I have a lot at this stage, so I really have to bond with something. I love everything I buy for my store, so sometimes it’s hard to part with something. If I don’t like it visually, I don’t buy it anymore. I’ve made a couple of mistakes like that. You have to be able to part with things. I’ve learned something else will always come along.”

When it does, Weiss will be ready to find a space for it. She credits the strong and lively character of her loft to the juxtaposition of things, how they work together regardless of whether they’re from the same era. Or, as she notes with great assurance: “If you like something, it’s going to fit in.”