An 1870 canine portrait by Dutch painter Jan Van Essen hangs over the sofa in the den. Other art includes a pair of paintings by British artist G. Armfield (circa 1840) and a maquette of a proposed sculpture by Pittsburgh artist Ed Ebberly on the coffee table designed by the owner.

Unlike most of the homes designed by architect Brandon Smith, the stucco, brick and limestone residence in Squirrel Hill isn’t large or imposing. It was built in 1948 for a retired couple who were downsizing, but who wanted an elegant and formal town house. 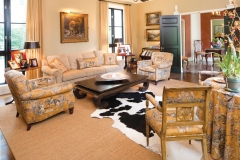 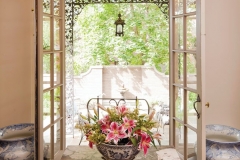 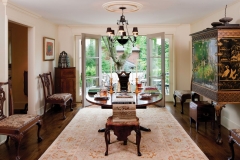 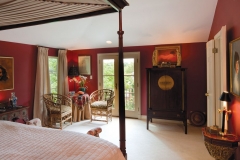 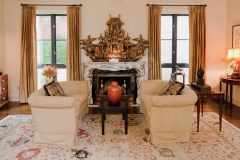 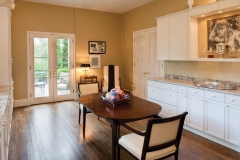 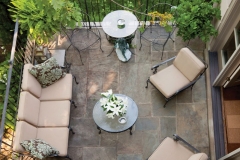 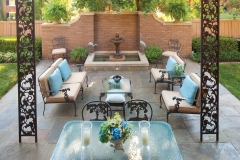 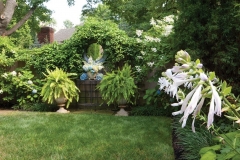 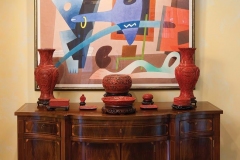 The result is something rare—a small home that boasts the structure and fine details of the much grander residences he created for many local industrialists.

Perhaps freed from the constraint of having to project a baronial kind of image, Smith found inspiration in the petite maisons of Versailles. These charming country houses reflected the glory of the French court in the early 18th century, but on a more intimate and casual scale. Originally comprising six rooms on one level, the home Smith designed featured a walled courtyard entrance and garden. Reproductions of old New Orleans iron lace frame the portico and over-sized windows, lending another hint of a French accent.

The open floor plan made the residence ideal for entertaining—one reason the present owner purchased the property in 1999. But it also made the private quarters somewhat public. Working with her daughter-in-law, who is an architect, the owner decided to add a second level above the garage, with a stairwell in a new “event room” that leads to the two bedrooms and baths.

“I liked the layout, the interplay between the rooms inside and the garden rooms outside, the flow of the space. It was perfect for entertaining family and friends,” the owner recalls. “I wanted the first floor as a floor I could utilize during the day, and then go upstairs at night.”

Having lived in a grand manse herself in Sewickley for many years, the owner valued the exquisite craftsmanship. But it was the light that spoke to the artist in her. She made an offer the minute she saw the house, not knowing a thing about its lineage. Alas, the previous resident became ill and took his home off the market. Eight years later it was listed again, and this time she was successful in landing what clearly was meant to be her new residence.

“There was so much potential in the house and garden. When I walked in I knew immediately that Brandon Smith had played a role in the house because there were certain details that he used in his architecture. It was one of the last homes he designed, and it was extra special because it was designed for a couple.”

The house was situated to provide full views from the entrance hall in either direction—into the living and dining rooms on one side, the family room and office on the other. Straight ahead is one of two stone terraces—the second is raised and can be accessed through both the kitchen and dining room. The full-length windows were designed to mimic iron-trimmed doors, giving the illusion they connect the gardens to the house on three sides. The gardens were “a mess,” the owner recalls. Working with Ron Kotcho, she created a walled garden of “rooms” that deftly combine formal borders with more relaxed plantings.

With her background as an artist, arts administrator and art advisor, the owner had both the desire and the expertise to design her own interiors. She also possessed an extraordinary collection of art and antiques, many of which were family heirlooms, so choosing colors and textiles that wouldn’t compete with them was her first step.

“I’m definitely a beige person. That’s the soft, quiet palette I love. I painted a bedroom lime green once, and I hated it when I woke up! I painted a bedroom cinnabar and I loved it.” A self-avowed “auction junkie,” the owner is active in Pittsburgh’s art scene and is as drawn to contemporary art as she is to Orientalia, especially the Chinese and Japanese art she treasures. A collection of carved lacquerware and Chippendale-inspired Chinoiserie furniture blends easily with modern works by artists she knows or loves. The house is filled with little surprises, such as the two plaster busts that peer over the new kitchen addition, announcing that even this serenely sleek space is not what it seems.

Throughout the residence, great care was taken to respect and echo Smith’s original concept. For instance, the finials in the kitchen were added to reference the ones in the den, and the master bedroom has doors in the French style of the house that overlook the patio below. “The good bones were there. It just needed to be brought back to life again,” the owner says. With her exquisite taste and appreciation for architecture, she has restored the luster on a tiny jewel box that Madame Pompadour could happily call home.