↓ Skip to Main Content
Search
Home › Article › Into the Woods

Architect Robert Indovina designed an open main living level with glass walls on the park side of the residence. The family room features a leather sofa from Perlora.

One of the many paths through Frick Park wanders past the house, which sits on the crest of a hill overlooking acres of woodland. Each time he passed it, the current owner would tell his wife that if it ever came on the market, he would buy it. 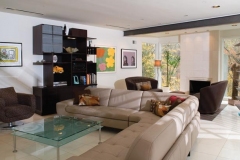 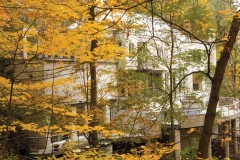 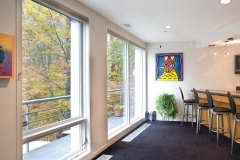 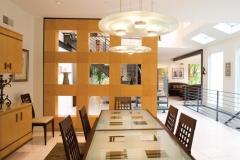 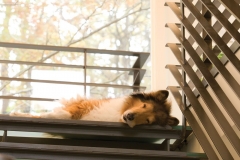 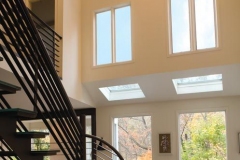 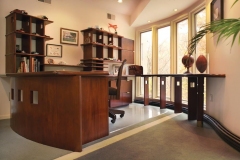 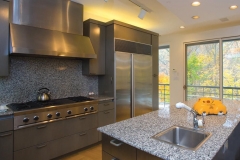 In fact, it was on the market and had been for 18 months. But it wasn’t until he saw an ad with a photo that the owner realized his dream was about to come true. He made an offer the relocated former owner accepted, and a new chapter in the couple’s life began.

Built 15 years ago on the site of an old caretaker’s cottage that had burned down, the house is a magnificent example of a contemporary that was designed to take full advantage of its setting. Architect Robert Indovina of Indovina Associates in Shadyside was given free reign by the first owner, who showed him the site and asked if something could be done with it. “I thought it was a fabulous site, despite being on a very steep hill with a 50-foot drop,” Indovina remembers. But what really attracted him to the project was the chance to create a contemporary residence. “Pittsburgh is a very conservative city, and there are not a lot of people who like contemporary design.”

Indovina began by letting the site guide him. “In this case, we were close to the road, so the house is open in the back but closed in the front. The pool, family room, living room and kitchen are all oriented toward the back, where the view is framed right in the center of the trees.”

With design projects that include the PPG Aquarium and new Polar bear exhibit at the Pittsburgh Zoo, Indovina has an appreciation for nature and the importance of incorporating it into architecture. With this residence, he struck gold, or should we say green? The four-level home has intimate spaces on the top floor where the bedrooms are located, as well as on the lower level where more bedrooms can be found. But just about everything else is defined by glass walls that let the spectacular view become the focal point.

“It’s like our neighbor said when we moved in. Welcome to paradise!” the owner says. “Looking into the woods — it’s like being on vacation every day. The dog absolutely loves this house. I didn’t ask him, but I don’t need to ask him,” he jokes about the collie who likes to nap on the cool, French limestone floor.

The couple has four grown children and three grandchildren, “and all the kids come to visit because it’s such an eventful house, a party house.” A sizable lap pool that is cantilevered over the woods is a major attraction. So is the pool bar and adjacent exercise room with a steam shower and double walk-in shower. “We didn’t need to go away this summer — it’s all here,” he says.

What the homeowners seem to appreciate most is the attention to detail that was lavished on the residence. State-of-the-art lighting illuminates every room from control panels that can create any effect. Because the first owner was in the metals business, special care was taken in crafting such simple things as heating grates. The railings are sand-blasted stainless steel inside and out, with a velvet finish that softens the effect. Sand-blasted glass steps are transparent and help keep the home flooded with natural light. Speakers everywhere, a media room complete with a retractable screen and custom built-ins throughout the house made the move from the couple’s previous Victorian painless.

One purchase they did make was the dining room table and chairs, which they found while skiing in Vermont. The squares in the design corresponded to the module motif that runs throughout the house.

“Squares that are askew,” laughs Indovina. “I got enamored of a 10-degree angle in that house. I’m a modern mannerist at heart. Late Renaissance mannerist architects would take all the rules and break them. Introducing the unexpected. To me that’s what gives the house its richness. It catches your eye, and you don’t know why. It tends to create some ‘happy accidents,’ intersections of planes and materials.”

For the owner, the happiest accident was finding the house was available. “As soon as I walked in, I wanted it,” he says. “I still go to work every day, but when I come home, I’m retired.”