The gravel entrance area to this Ligonier home was graded to take advantage of the sweeping views and the stone garages were added by the current owners.

We used to have 20 chickens. Now we have two!” laments the lady of the house, citing coyotes and foxes as the culprits. “We did have two mini attack donkeys that were supposed to keep the predators away from the chickens, and they did a good job. But when they were out to pasture the neighbor’s dogs got out and one of the donkeys ran towards the fence and broke her neck instantly. They die in 2 or 3 days if they don’t have a partner. You always have to have two donkeys, or a goat and a donkey. They need companionship.” 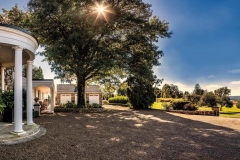 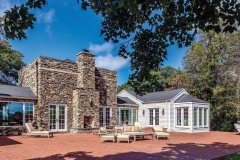 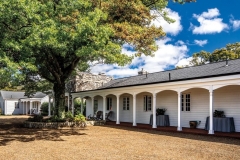 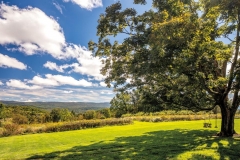 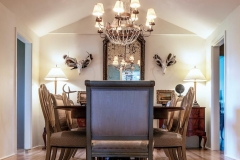 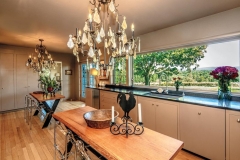 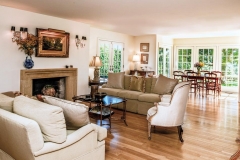 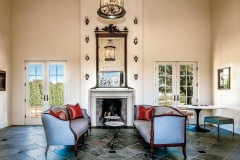 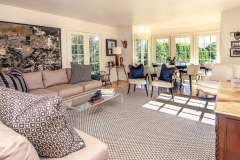 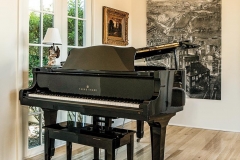 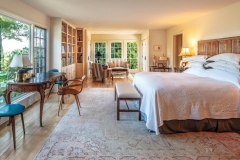 Heart-broken mini attack donkeys. Now there is a concept alien to most city folks, but it’s perfectly in keeping with the new life these former city folks lead on a 29-acre farm in Ligonier. To say the setting is bucolic barely describes the sweeping views from the property, the apple and stone fruit orchards, the way the house sits on top of a gentle hill with a drive that winds past assorted clapboard outbuildings. Great attention has been paid to every detail since the couple purchased the property in 2005. It served as a weekend home when their primary residence was in Shadyside, and that enabled them to undertake a major renovation without having to breathe the dust.

“We started with just one window because the frame was rotted and all of a sudden it turned into Mr. Blanding’s dream house. The whole house had to be done. Rather than starting with a cohesive plan, we just sort of ambled into it and the renovation took on a life of its own. Every time we turned around, there was some new problem. Everything had to be changed and modified and made to work. If we had thought about it originally we would have razed the house,” the wife says. “It would have made more sense to tear it down and start over.”

Built in 1948, the house was actually two pre-fab homes set on slabs that were joined together by a large entrance hall the previous owners used as their living room.

“The house was livable, but my wife pays attention to more of that than I do,” laughs the husband. “Things needed to be repaired and replaced, the center hall was removed and rebuilt in a much bigger fashion. All of the other walls were taken down to the studs and insulated. We totally repurposed and redesigned the living space.”

By the time the couple was done, all the windows were either new or replaced by glass doors, opening the house up to the spectacular vistas and making it conversant to the outside, whatever the season. Three garages and a portico that leads to them were added on the newly leveled entrance area. The exterior was redone and extensive brick and stone terraces created outside spaces. New wiring, plumbing, heating, the quarter-sawn oak flooring—nothing was left undone. But the biggest change came in the way the rooms were repositioned.

Since the house was basically two houses, the couple decided to live in one and use the other as guest quarters when their children and grandchildren came to visit. The connecting entrance hall was substantially enlarged after the wife showed up on the job site one day to discover all that was left of the original was the fireplace. Even the roof had mistakenly been torn off by the first contractor. Because the kitchen was on the other side, the couple converted a porch into a new kitchen, completing a generous floor plan that includes a spacious living room, dining room and master suite with two baths. The guest wing has a large family room, four bedrooms including two on a lower level that was carved out of the hillside and a small utility kitchen.

The wife did her own plans for the renovation with an assist from the late Mark DiVittorio, a friend who had helped with their city house. They worked together on the interior design, incorporating most of the furnishings from the former home. The couple asked another friend, Norm Ramage, to make some pieces from trees on the property. The rustic tables in the kitchen and the bookend consoles in the entry room are his work. Ramage also took over as the general contractor on the project, which took three years to complete. “It would have taken half that if we had torn it down,” the wife notes. “But if you’re happy at the end of it then it’s fine. There’s nothing worse than being unhappy!”

And happy they are. Since the husband retired, the couple lives on the farm full-time, though they visit the city to enjoy the arts, see friends and support several causes in which they remain active.

“We saw the farm in the middle of a snowstorm, and we liked the beauty, the orchards,” remembers the husband. “I like the serenity of it, watching the sun come up through the mountains or a rainstorm, or the sunsets on Chestnut Ridge. You can see it all. I like being the steward of this land. And I like the outbuildings and how they provided me with an opportunity to pursue my hobbies.”

And indeed, he has many. Automobile restoration, metal working, wine making and apple cider pressing are a few. The husband is converting a 1966 VW Karmann Ghia into an electric car. He’s even installed solar panels on the garage roof and added a windmill to feed a battery bank so eventually he can plug in his car. A greenhouse is a newer addition to the property, and the couple grows fruit and vegetables, much of which they donate to the local food bank. The Boy Scouts descend on the orchard in the fall, picking apples for their fundraisers.

The sense of belonging to a community is one of the benefits the couple hadn’t really anticipated.

“I love a small town,” says the wife. “It’s so much easier to live here, people are kind and helpful and life is good. The Boy Scouts coming over to pick the apples and make cider—the older I get the more I appreciate that. I always loved it out here. It just feels so relaxing and completely different from Pittsburgh. I love the privacy. I love walking around on the property, and gardening, and we have animals. It’s just beautiful, it’s quiet and I’m a very quiet person. I can amuse myself for days on end,” she says with a laugh.