Owned by a Pittsburgh couple, this California home is made of stucco and native stone with retractable glass window walls that remove any barrier to the outdoors. Interior designer Pat Navarro reinforced the inside/outside concept with a pair of steel and slate dining tables—one poolside and an identical one indoors. The saltwater pool is white plaster and the surrounding porcelain floor tiles are used throughout the home.

The definition of oasis is simple: a fertile spot in the desert where water can be found. That applies to any number of gated golf communities that surround Palm Springs, California. But The Reserve in Indian Wells is different. Instead of fighting nature by pumping water onto artificially green lawns, it embraces the desert soil. And that was the appeal for a Pittsburgh couple who bought a home there four years ago. 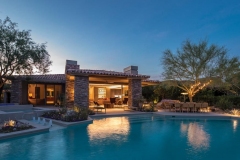 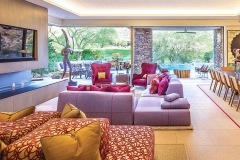 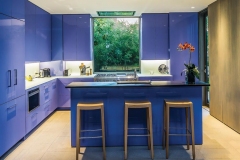 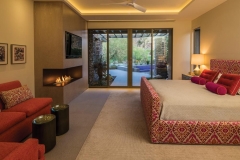 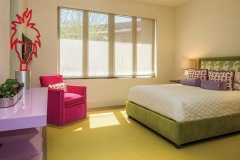 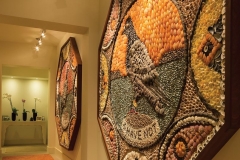 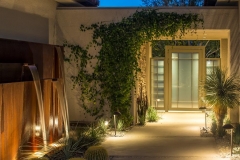 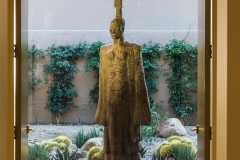 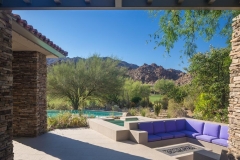 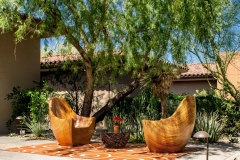 “We live in a beautiful part of the world that is lush and green, and we didn’t want to duplicate that,” the wife says. “We went out for a vacation to play golf with good friends. While we were there, the weather was fabulous, the air was dry, the sky was an incredible blue, and it was surrounded by the most beautiful mountains, which was a real surprise for us.”

Except for the golf course, the plants in The Reserve are indigenous to the desert and, in particular, the Coachella Valley. Cacti, succulents and Palo Verde trees abound, and so do Mediterranean homes. The couple spent 10 days house-hunting and went back a second time before they decided to buy. The residence was Tuscan in style, which they found undesirable, but it had great space and therefore great potential. So they lived in it for a season to get a feeling for what they liked, what they didn’t and ultimately, what they wanted to do. Then they asked interior designer Pat Navarro, who had worked with them on their other homes, to help with the transformation.

“We wanted to turn it into a contemporary house with the feeling of the area and the ability to live inside and out, so that the house opens totally to the outside and the outside comes in,” the wife says.

Working with that concept meant gutting the house to the studs during a year-long renovation and creating what is basically one big space.

“The drastic and radical thing was to relocate the fireplace, which was no small feat, and opening the back,” recalls Navarro, who is based in Pittsburgh. “We have one small column where we had five before. There were opposing views and none oriented to the outside. Now we have a seating grouping inside that repeats itself outside, so it diagonally looks out through the glass window. There are dining tables for 12 inside and out. We literally mimicked the interior outside, and we used interior furniture outside, including a little oriental rug and four leather chairs. It’s California, the desert; it’s dry and the furniture works very nicely.”

Perhaps the most dramatic change was removing the back wall and replacing it with glass panels that slide into side pockets, disappearing completely. There is no support column on the corner, reinforcing the openness and creating a seamless flow that incorporates the outside living spaces. Further unifying the residence is the use throughout of the same stone-like porcelain tile.

“That’s key,” Navarro says. “The tile is the same from the front door to the shower walls to the exterior paving to the pool coping. The house isn’t that large, 4,000 square feet, but it feels like a big space. And we cleaned up the space. The ceilings are 10-feet plus, and we put in large panes of glass where there were little ones.”

Adds the wife: “It’s spacious but not too large. We use all the space we have. There aren’t empty rooms floating around. It’s comfortable just for us but works well with guests for entertaining. I wanted a comfortable, easy contemporary house with lots of color. There’s never a white wall in my houses but here the hot colors are around the furniture. I went the opposite of what I usually do. I wanted it to breathe. In Pennsylvania, I want it to feel cozy. In California, I want to feel airy.”

While the street side of the home is not unlike its stucco and clay tile-roofed neighbors, the door opens into an entrance courtyard with a cascading linear fountain. A guest cottage, or casita, is off to the side as one heads indoors, past the office and bedrooms and into the main living area. Aside from the view straight through the house, the biggest surprise is the kitchen with its wooden cabinetry painted a high gloss purple. There are more shades of purple in the upholstery, along with pinks, oranges and lime green.

“I like a lot of color and I’m always looking for somewhere to start when I do a project,” says the wife. “Since I like to cook and entertain, the kitchen is important. It was a major part of the renovation. I thought the kitchen should be the color of the sky. It’s such a wonderful sky out there—blue with a little bit of pink. We used mostly colors that you see in the desert. When the succulents bloom they come out in the most amazing colors. The orange in those crazy chairs is similar to what you see in the flowers, and a lot of bright pinks and the blue skies and a little of the green that’s in the succulents.”

The B&B Italia sofa became a focal point for the furnishings, many of which are custom pieces inspired by Palm Spring’s famed Modernism Week that Navarro had made in Pittsburgh. Other pieces, including the orange chairs and leather chairs outside, were auction finds from Concept Art Gallery.

“You think Palm Springs, you think midcentury modern, but that’s really not their aesthetic,” says Navarro. “They wanted it to be cleaner, they wanted to exploit the views of the desert and their art. They were purchasing art all along. They had specific walls they knew art was going on. Some they had, some they filled in afterwards. The walls appear to be white, but they’re actually a warm, pale gray.”

In fact, the big walls were one of the things that drew the couple to the house since they love big art. They had been following some artists for a long time—Duke Riley, for instance, whose giant Sailor Valentines made of shells hang in the hall. Other artists were new finds they discovered, including the bronze boxing bunny and the goddess figure from South Africa.

In many cases, the couple’s impressive art collection can be seen from the outside through large windows installed for that reason. But it vies with an extraordinary display of nature the house was designed to incorporate. With views ranging from the 15th fairway to the majestic sweep of the Santa Rosa Mountains, the owners can relax in the salt water pool or enjoy dinner under a starry sky.

“The fire pit is next to the hot tub, and a waterfall flows from the hot tub into the swimming pool. It is pretty amazing to sit in the hot tub and look at the stars at night. Now and then you’ll look and say there’s a cloud in the sky—no, it’s a plane trail! It’s clear and beautiful day after day.

“I think there’s a wow factor with this house,” continues the wife. “Some people love it and say ‘wow’ and others say ‘whoa.’ People tend to tell us they think it’s amazing. Maybe that’s the truth and maybe not. But our house doesn’t have any beige in it!”