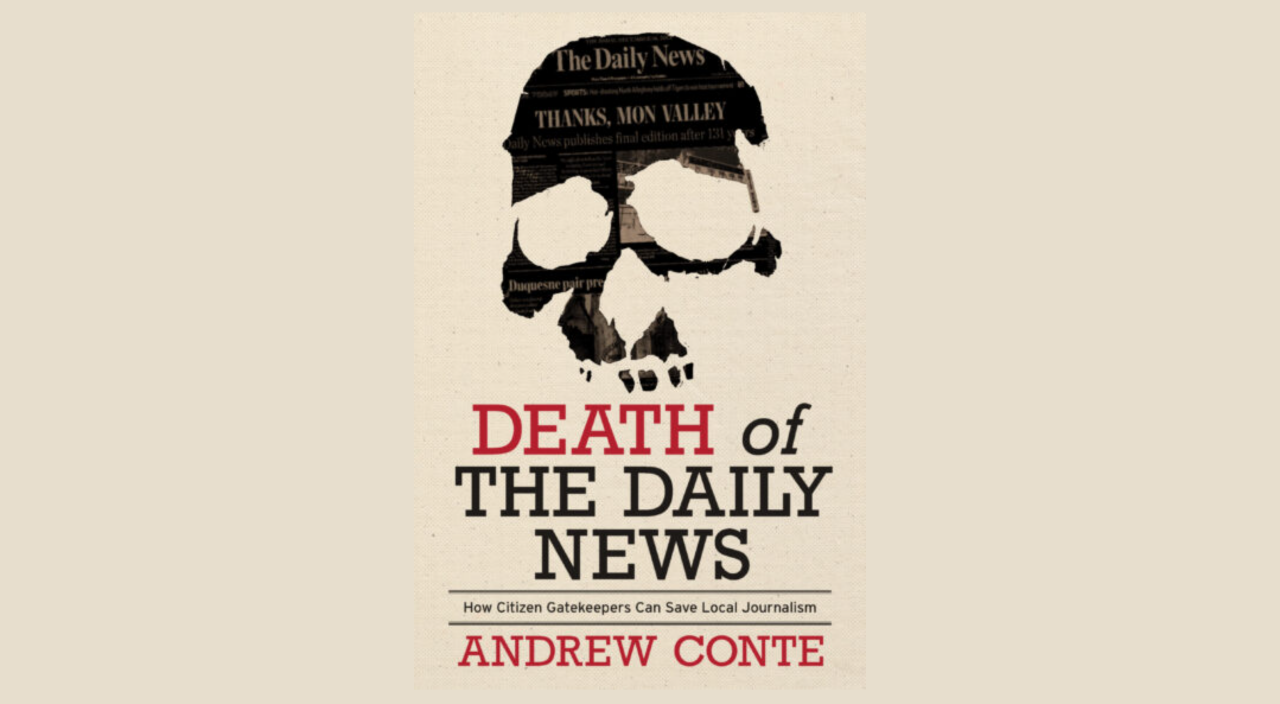 Death of the Daily News How Citizen Gatekeepers Can Save Local Journalism By Andrew Conte. Cover image credit: University of Pittsburgh Press

Nearly 200 years ago, French social scientist Alexis De’ Tocqueville spent nine months touring America, documenting observations in what became the seminal Democracy in America. His take on the job of newspapers in a bourgeoning new country experimenting in representative democracy could be his most prescient: “’To suppose they only serve to protect freedom would be to diminish their importance.  They maintain civilization…if there were no newspapers there would be no common activity.’”  In a world of declining readerships and ubiquitous clickbait that often passes for news, it’s an opinion still shared by many a newshound and scholar, including author Andrew Conte in his recent book, Death of the Daily News: How Citizen Gatekeepers Can Save Local Journalism.

An award-winning journalist and director of Point Park University’s Center for Media Innovation, the author makes convincing arguments for how to fill the societal void as community newspapers continue their downward spiral.  Conte’s statistics include that nearly a quarter of all newspapers have closed since 2004, with the number of practicing journalists having fallen by half since 2006. Declining advertising revenues and the ubiquity of social media are big culprits. By exploring this dire landscape, Conte examines ramifications and possible solutions through research and analysis, focusing on the 2015 closing of McKeesport’s Daily News as a fitting example. In many ways, he finds, it’s a case of a community not realizing what’s at stake until it’s gone.  What’s replaced it is a “news desert,” where “citizens struggle to find out what happens around them.”

Death of the Daily News hums in its thoughtful balance of the scholarly backed by the pathos shared by McKeesport citizens and politicians alike.  That this loss comes on the heels of other crushing blows to the local economy can’t be ignored. One resident sums it nicely: “It’s sad…because the Daily News was such a big part of my life growing up.  I’ve been in McKeesport for 37 years, so I saw the decline of McKeesport…It’s like I live in a ghost town.  People died to come to McKeesport; now people wouldn’t be caught dead in McKeesport.”  What’s vanished for communities like these across the country is difficult to quantify, as this lack of cohesiveness can be found in what’s not to be found; birth and wedding announcements, high school sports replete with game time photos, the quotidian doings of municipal governments, and, strangely enough, the obituaries.

What fills the void of fact-checked stories from professionals trained in journalistic ethics is often gossip.  In one case, a person tells others at a popular diner that a neighbor has passed.  When the “deceased” walks in the front door, many are both surprised and shamed for having spread what’s unverified.  In Conte’s assessment, what’s to fill the void is training citizen “gatekeepers” to become reporters, determining what gets covered on social media sites in the way that newspaper editors once chose what stories to cover, for better or worse. And while other publications, online or otherwise, look to bring community news back to McKeesport, many are unwilling to accept the newcomers as they haven’t gained enough “social capital,” defined as “the networks of relationships among people who live and work in a particular society, enabling that society to function effectively.” It’s a tough nut to crack for both residents and leaders who struggle to find stability amid so much change. What can’t be denied is that Death of the Daily News is an important volume that proves that the journalistic proverb, “afflict the comfortable and comfort the afflicted,” remains shorthand for the role news gathering should play in all its evolving forms.