By raising the ceiling and adding pine paneling and a fireplace, this space was transformed into the much-used family room. French doors at right (not shown) open onto an expansive stone terrace. Rug by Elizabeth Eakins. Painting by Mary Sipp Green.

Like many diamonds, the house that sits discreetly back on one of the most beautiful streets in the city was in the rough when the owner first saw it. 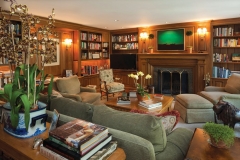 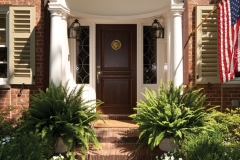 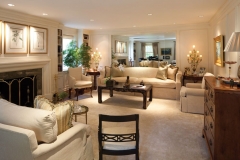 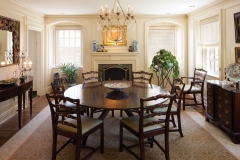 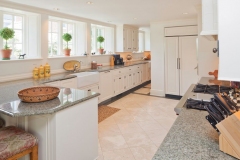 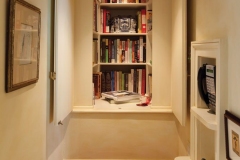 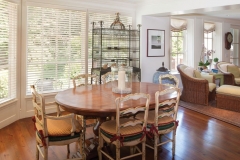 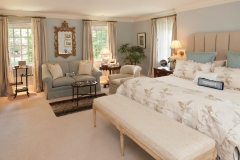 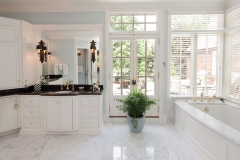 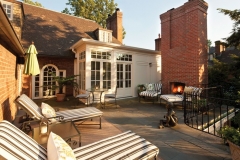 “I walked through the front door and immediately loved the home, but envisioned five or six changes I would make,” she recalls. Standing in the entrance hall five years later, after changes too numerous to count, she laughs as she points out just a few:

A new, custom front door and sidelights made to resemble old glass; honed limestone floors accented with the same green granite that now surrounds the three fireplaces downstairs; display cases and bookcases built into the living room and dining room; and a dramatic mirrored wall where once a door interrupted. All this before we approach the real changes. “The major thing was opening up the back of the house,” she says.

That would be an understatement.

The house, built in 1929, had been through a series of renovations at the hands of previous owners, but none had been extensive enough to destroy the character of the residence. Much of it had been cosmetic, rather than structural, working with existing issues rather than trying to correct them. At the same time, it was the home’s idiosyncracies that appealed to the owner and gave the house its quirky charm. How to update the residence for today’s lifestyle yet retain its integrity and personality?

“I had architect Tony Stillson come in to take a look and verify my thoughts, and he did. He designed and delivered all those changes,” she says. “I knew other clients of his and had seen his work and liked it very much—his incredible attention to detail, bringing light into the home and creating livable spaces.”

That is very much the end result. The home sparkles with warmth and sunlight, and around every corner there is a welcoming spot to relax and enjoy. Regardless of the task, the occasion or the season, the home offers comfort and quiet elegance. Working with the architect, a plan was devised that would create more space but remain in keeping with the home’s scale. The ceiling was raised in the existing family room, and the exterior rear wall was removed to allow for a small addition. That effectively linked the kitchen and family room together via a new casual dining and sitting area. French doors and over-sized windows look out onto the terrace, which was extended to run the length of the house.

Above the addition is one of the home’s most remarkable spots—a spacious outdoor terrace covered in bluestone that can be accessed from the master suite. A giant fireplace, added when a new chimney was built to accommodate the one below in the family room, is used year-round. The effect is rather like being in a giant tree house, very private and romantic.

“We were just up there with a fire the other night. It’s a nice place to sit and read the morning papers, or lie in the sun in the afternoon. My favorite son-in-law has established a Christmas Eve tradition. After church we make a fire and gather round and make s’mores and sing carols. When you’re up there, even when you’re in the middle of the city, because of the mature trees you don’t see other homes.”

The owner participated in every phase of the year-and-a-half-long project and every decision, right down to the moldings that generously adorn each room. The rounded arches that initially bothered her now remind her of “a quaint English cottage, a storybook house,” and many of the home’s eccentricities were incorporated into the design. What had been an empty hole in the wall with a bench beneath is now a cookbook cupboard. A similar space in the totally renovated basement holds oversized kitchen items, such as lobster pots.

When it was time to turn her attention to furnishing the home, she enlisted the aid of interior designer Mikell Schenck, who has worked with Stillson many times. With her children grown, the owner was moving from a large, traditional home in Fox Chapel and wanted to use much of what she already owned.

“I wanted a change in the feeling and style of my living space. I thought Mikell could help me articulate that. It’s such a serene and calming environment, even though it absorbs chaos very well. I give Mikell credit for that. The colors are neutral and everything flows together. Simple, elegant and easy are words that could describe her style.”

Schenck is known for imbuing interiors with sophistication and subtle luxury. Using texture, patina and a creamy palette, she combined luxe materials with old wood and the cool refinement of stone. A unifying factor is the limestone floor that runs from the front door through the kitchen, and the same granite on the fireplace is used for the kitchen counters and powder room floor. Random plank pine gives the family room a rustic, relaxed quality, while a silk rug in the living room keeps the front of the house more formal. Most of the furniture was re-covered and re-configured from the previous residence. With three bedrooms and three baths on the second floor and more on the third, having the furniture in hand was a huge timesaver.

“My client assembled the project’s team and communicated a clear design vision. She allowed the team to use experience and knowledge to accomplish the goal: create the home in her head,” Schenck says. “Her humor, steady support and close involvement had a significant impact on most architectural and design decisions. It’s fabulous when a client says ‘I really love this, it feels like I belong here.’ We didn’t want the house to have our imprint, we wanted it to have hers.”

Clearly delighted with the end result, the owner has indeed gone on to give it a personal imprint. Her Lab has the run of the house, leaving paw prints and chew toys on the soft rugs. Family photos and other mementoes abound, as do the books that fill so many shelves. Little collections are displayed here and there, along with paintings and china—nothing fussy, but homey in the best sense of the word.

“I wanted a place my children could come home to, and that could accommodate lots of people for entertaining. Yet I didn’t want to feel overwhelmed on a daily basis. This is a little big house or a big little house. It expands to include everybody. But when I’m here by myself I never feel like it’s too much house.”