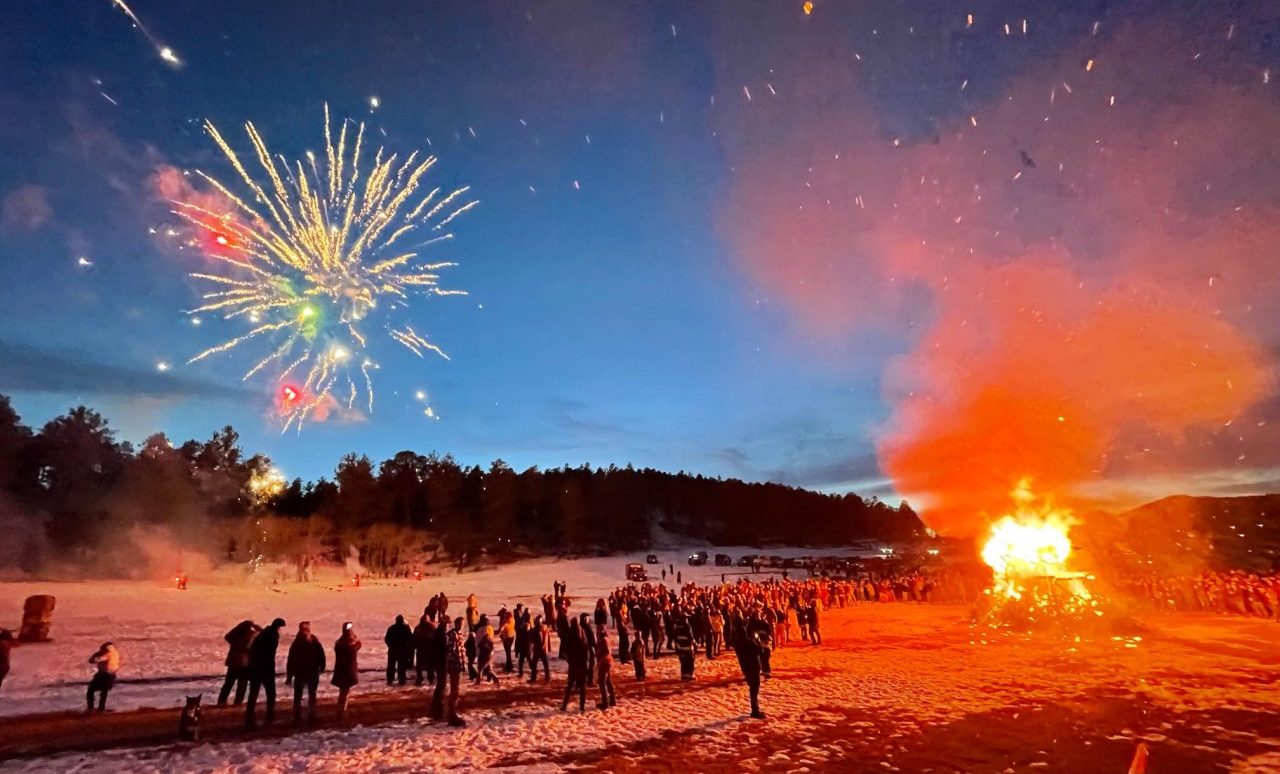 I am going to torch a massive, 30-foot-long beetle tonight. I will fork over twenty bucks and the local fire department will hand me a long branch that’s been swathed at the top with fabric. It looks like a giant Q-Tip, ready to be dipped in kerosene or gasoline or something easily combustible. They will ignite it and I will join a processional march that begins at the local high school, winds its way through a nice neighborhood, and ends at the top of a hill under the chant of “BURN, BEETLE, BURN!”

“This is awesome,” says a gal next to me excitedly, her long, dark hair in neat cornrows. “We’ve lived here fifteen years and always wanted to do this.”

“People came in from Wyoming,” someone chimes in.

There are dogs and small children and many adults gathering around the parking lot. More cars are pulling in. People are smiling, jubilant. There are sweatshirts and tee-shirts for sale.

“We need to up our game,” says my retired neighbor, Dave. My hubs is stuck at work pulling a 16-hour shift and managing a migraine. So, Dave is my escort for the night. “Everyone is wearing antennas on their head.”

This is Burning Beetle. An annual, winter event. The event. A stunning display of pyrotechnics flavored with a bit of savagery that carries the blessing of the local PD, VFD and EMT. A nice flip off to the Mountain Pine Beetle, a black bugger no bigger than a grain of rice that bores its way into timber, killing our Ponderosa Pines. Millions upon millions of pines; from far up in Vancouver down to our Southwestern border. The infestation is so alarming that the Forest Service will slice a standing, infested tree down to the ground, cutting it into large chunks to kill off larva. Take a drive anywhere in these parts and you’ll see; entire mountainsides can have more felled, chunked timber than standing.

The twenty bucks I’m forking over will support the local arts scene, with festivities culminating in the torch-bearing march that will end in burning a beetle effigy so monstrous, it took a team of volunteers months to make and a crane to plop it onto the pyre. THIS TICKET CERTIFIES THAT I’M IN THE MOB. 2022 TORCH BEARER, reads mine.

Being a bystander is totally free but not nearly as fun. I consider it a solid investment and happily fork over my cash. “TORCH BEARERS, MOVE AHEAD AND GET YOUR TORCH FROM THE FIREMEN! THEY WILL LIGHT IT FOR YOU!”

A mob of us moves to the left, just as drums become audible. Dum, dum, dum-da-dum.

“I can’t believe you didn’t get a torch,” I tell Dave.

“My probation doesn’t allow me playing with fire,” he jokes.

A fireman hands me a torch. Seven or eight feet in length to ensure I don’t singe the hair of my compatriots. I dip the end into an open flame and WOOSH! My giant Q-Tip is aflame. “OKAY, TORCH BEARERS, KEEP YOUR FLAMES HIGH SO YOU DON’T BURN YOUR NEIGHBOR!”

The procession begins. Dum, dum, dum-da-dum. At the helm is a patrol car from the local Sheriff’s department, lights flashing. The route to the beetle altar takes us through rows of cookie cutter homes. Kids peer out of living room windows. Dogs bark from behind fences. Families are camped out in the driveway, taking photos, videos, selfies. The local media is here. A drone hoovers above. There’s a full moon. Dum, dum, dum-da-dum. The chanting intensifies. “BURN, BEETLE BURN! BURN, BEETLE BURN!”

“Wow,” Dave says, turning around. “I’ll bet you there are a couple hundred torches behind us.”

As we ascend the hill, the beetle comes into sight. A sacrifice atop an altar of discarded Christmas trees. The whole thing is starting to feel Biblical. Dozens more cars have parked on the grassy knoll, alongside firetrucks and other emergency vehicles.

Dum, dum, rat-a-tat-tat. I do as I’m told. I find myself dead center; the head of the beetle mere steps from me and my open flame. Torches are burning. Drums continue rat-a-tat-tatting. No one says a word.

Without hesitating, she runs forward, heaving her torch into the Christmas trees. Behind us, the mob surges. My goal was to heave my torch, too, like a javelin. BURN BEETLE, BURN! Instead, I kinda give it a gentle toss, mesmerized. For a moment, I stand there, in the shadow of snarling teeth and wonky antenna. Then, sparks begin to fly. Flames begin to spit. The mob pushes forward again. Drums beating. Torches heaving. BURN BEETLE BURN!

Within moments, the beetle is engulfed in a massive fireball, flames licking the sky.

“This is the best night of my life!” someone screams, running away from the inferno. A group of us are twenty feet away and feeling the heat. We move further up the hill as smoke pours from the beetle, its wooden cage the only thing now visible through the flames. The heat is incredible. We move back further as someone below gets closer and poses. The perfect Instagram post. An EMT leans casually against his ambulance, chatting with one of the cops. The mob stands there, mesmerized. Children dance. Dum, dum, rat-a-tat-tat. The hissing, spitting, and crackling of the fireball echoes in our ears. Firecrackers explode and crackle. Boom! Boomboomboomboom!

Someone begins to clap. Then, the crowd slowly begins to disperse. There isn’t much talk as we retrace our steps to the parking lot. Below us, a trail of headlights heads towards Main Street to raise a celebratory glass during the pub crawl. I’m not that cool. Apparently, neither is Dave. His recliner is calling. I’m usually in bed by 8:00 p.m.

“Not a bad way to spend a Saturday night,” he finally says.