The exterior spaces of the home are as important as the interior. The loggia flanks the pool on two sides and contains several seating and dining areas. A path of cement pavers decorated with imprints of tropical leaves leads from a rear garden.

Waiting at the drawbridge for the fishing boats to pass, a bag of fresh crabs in the back seat and a lazy Gulf breeze ruffling the palms, it’s easy to see why a family from Pittsburgh would want to linger in Boca Grande. 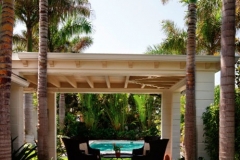 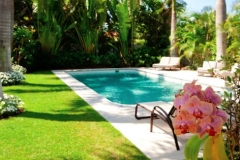 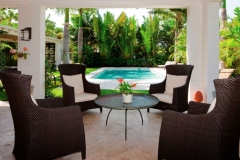 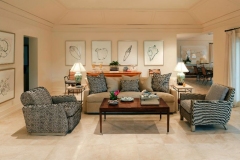 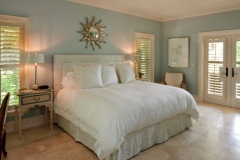 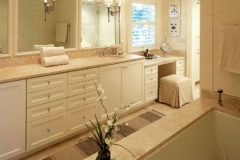 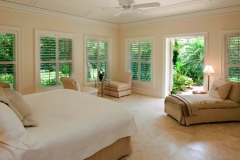 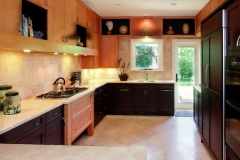 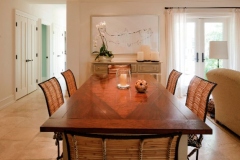 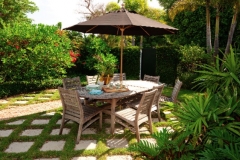 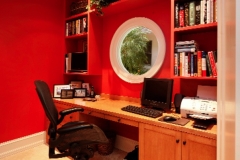 Located on tiny Gasparilla Island on the west coast of Florida, it has withstood both hurricanes and the ravages of time and money. Though there are some showy beach houses, most of the residents live more quietly in classic bungalows and ranch houses often tucked behind vine-covered walls.

“Boca Grande is like old Florida. There are no high rises, no fast food places, no gas stations or cleaners. It’s very much of a small town,” says the wife, who has been retreating there since the late 1970s.

Though the island boasts a top-notch golf course at the Gasparilla Inn and is rated one of the best places in the U.S. for fishing, it’s also a nature preserve teeming with wildlife. A bike path 12 miles long runs down the middle of the island, replacing the train tracks that once hauled phosphate to the tankers at sea. It’s shared with golf carts, the preferred mode of transport, and the walkers and runners who seem to be a constant on even the hottest day. The accessibility to the outdoors is one reason the family loves Boca Grande and chose to buy “a very tired” 1960’s California-style ranch house on the edge of the Historic District, at the narrowest point of the island. Some 25 yards to the right is a kayak launch on the Boca Grande Channel, and 200 yards to the left are miles of pristine beach on the Gulf of Mexico.

Shortly after the family purchased the home on a spacious corner lot, Hurricane Charlie damaged it in 2004. The disaster turned out to be a blessing of sorts since a major renovation had been planned anyway. Unlike the rest of the island, where homes must be built 10 feet above the flood plan, existing Historic District homes can be at ground level. That suited the couple, who “wanted to be on one level for our dotage.” More important, they envisioned the residence as having equal interior and exterior living space. Being able to step outside directly into the garden or onto the spacious, L-shaped loggia that frames the pool was a huge asset.

Of course none of that existed when they first saw the home. “We looked at a dozen properties, and what we liked was we could create our own little world,” says the husband. “We knew immediately when we came here it could be an oasis because there was a wall all around it.”

The couple imported architect Tony Stillson from Pittsburgh, with whom they had worked on other projects. Historic District regulations limited them to expanding the size by 50 percent, and the original exterior walls had to remain. With that in mind, Stillson drew up a plan to extend the rear of the house, adding a master suite, a small den and a larger garage that could hold both cars the family keeps in Florida and the golf cart they use daily. What had formerly been a patio became a bedroom for the four grandchildren, complete with an ingenious double bunk bed that looks like a ship’s berth. A bathroom next to it is shared with a guest room used by the daughter and her husband, creating separate family quarters for the children.

The home’s living area was opened up in several ways, starting with Stillson’s idea to lengthen the jalousie windows, which were so high they blocked the view to the outside. He replaced them with windows that reached almost to the floor and added numerous sets of French doors, giving the rooms both additional light and access to the gardens. The living room ceiling was raised and coved, and three levels of molding were added to create character. Throughout the house, honed travertine flooring unites the rooms and removes any worries of sand scratching wood floors. The same stone is used for counters in the baths and kitchen, which the wife wanted to “disappear.” Instead of the standard white cabinetry, she chose two shades of stained birch and a sleek design that draws the eye straight through the room to the greenery beyond.

Integral to Stillson’s plan was the loggia, which abuts the living room on one side, the family room, dining area and a second guest room on the other. A rougher version of the travertine brings the inside out, and dark wicker seating by Grange creates several types of spaces where the family can relax, dine or take a nap. Giant fans keep air circulating and the mildew at bay, but they also blend the scents that waft profusely from the lush vegetation surrounding the residence. With the aid of Richard Harrison of Hazeltine Nurseries and Peter Soltis Landscaping, the couple divided the exterior into four quadrants designed for outside living.

“It’s set up to allow the parents and grandparents to enjoy the kids and the fun,” says the wife. “One of the gardens is for volleyball and playing catch, one is for swimming, one is set up for reading and quiet, and one for dining. It allows a big family to be spread out in different spaces or be together in a pile.”

The loggia and pool area is the largest, and the royal palms have grown to tremendous heights in less than five years. Because it’s protected, the loggia stays warm and can be used year round. An intimate dining garden walled with tall hedges and jasmine is just off the kitchen and boasts weathered teak furniture that requires no maintenance. “We’d seen a garden in Sonoma that we wanted to duplicate,” says the husband. “It feels like you’re in Italy.” A small garden off the master bedroom is a place for solitude and an enclosed yard is perfect for the kids’ play area.

“We wanted our own Garden of Eden with lemon, lime, grapefruit, coconut and banana trees instead of apples,” says the wife. “A peaceful oasis that could easily be transformed into a boisterous playground adaptable to all ages.” Adds the husband: “You can disappear in here, the world disappears. You can look at the stars in the night sky when you’re not looking at the greenery. We really do want to step away from the world in the places where we live.”

Everyone in Boca Grande seems to feel the same way.