The bar, with a brushed aluminum ceiling, features goat skin “Onassis” bar stools originally designed for his yacht. The painting beside the bar is by Ed Paschke, and over the fireplace is an oil by Philip Pearlstein. The neon work of Andy Warhol on the bar is from the museum’s opening. Leather furniture from Pace.

I want to make a comfortable environment, not change the way people live,” architect Edward Grenzbach told John Loring when he was interviewed for a 1977 article in Architectural Digest on the house he had just designed for Alfred Hunt. 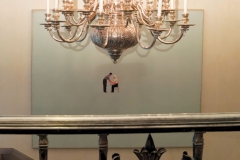 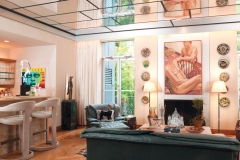 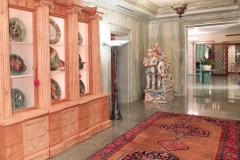 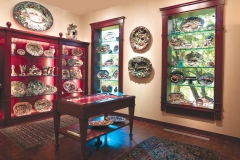 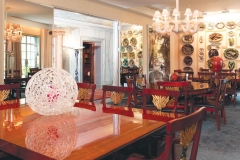 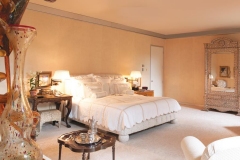 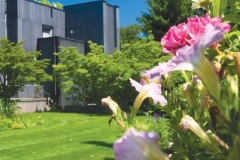 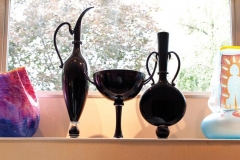 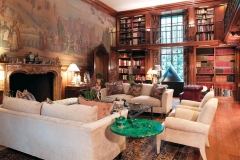 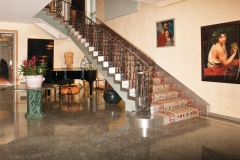 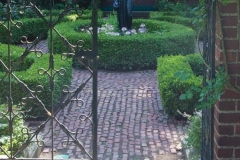 “I’m an environmentalist, not a psychiatrist. I put giraffes among tall trees and polar bears on hunks of ice.”

The house is like no other ever built, nor can it be duplicated. Hunt was not only the vice president of Alcoa, the company founded by his grandfather, but an heir to its fortune. Part of his inheritance included Elmhurst, the turn-of-the-century Pittsburgh mansion in which he grew up. But the stolid residence didn’t fit his lifestyle as both a bachelor and a visionary who wanted to showcase the creative potential of aluminum. And so he hired the Los-Angeles based Grenzbach to create a new home, one that was contemporary and luxurious in the way of amenities, yet reflected the era of gracious living in which he had been bred.

Born with an aluminum spoon in his mouth, Hunt appreciated the need for spacious common areas, a dining room large enough to seat 35, an adjoining terrace for the overflow on a hot summer night, and small things, such as an adequate butler’s pantry and silver and linen closets. But among his important requests were two that make the house extraordinary: he asked that aluminum be used as much as possible throughout the residence and that historic components from Elmhurst be incorporated into the design.

Chief among them was the library from Elmhurst that had been added to the house in 1937. Hunt’s mother, Rachel, was a renowned bookbinder and collector of rare books. She and her husband, Roy, commissioned architects Benno Jansen and William Cocken to design the two-story structure. Paneled in French walnut, the room measures 40 by 22, with 15-foot walls intersected by a balcony on three sides. A mural based on the French poem “Carcassonne” by Gustave Nadaud was painted on the fourth wall by Ernest Peixotto (1869–1940).

Using the scale of the library as a starting point, Grenzbach planned an entrance gallery large enough to hold the rare matchbook marble removed from the foyer of Elmhurst and a sweeping stairway that could accommodate its ornate aluminum balustrade. Matching aluminum and glass doors, all made by Blumcraft, were also positioned throughout the public area, as were ornate chandeliers made from aluminum.

That the old blends so well with the new is a tribute to Grenzbach’s deft use of a variety of aluminum products, many so simple they escape a casual glance. Hunt saw an elegance in the metal that he wanted the architect to emphasize, and brushed aluminum steps, a ceiling in the den, aluminum moldings around the doors and windows, and even a 60-by-10-foot aluminum lap pool in the lower level, quietly testify to the metal’s versatility. The most surprising use is the striking exterior, which is covered in slate-like slabs of both cast and extruded aluminum.

The current owners, who purchased the home from Hunt’s estate 24 years ago, were smitten by the softly gleaming serenity that permeates the residence. But their challenge was to make it less a showcase and more of a family home, a daunting task given its 13,000 square feet and grand scale.

“I loved it when we saw it,” says the lady of the house. “It had everything I ever wanted. I was looking for a big, gracious home. Probably my favorite was English Tudor because that’s what I grew up in. But I always felt this house was a combination of the old and the new.”

The residents brought in architect Herb Seigle to adapt the home for their needs, combining bedrooms into a master suite and adding a bar to the den, making it a comfortable room for casual entertaining. They also modernized the lighting, using Hal Hilbish from Maguire-Hilbish, and, with Seigle, made numerous trips to New York to purchase the custom furnishings. Extensive built-ins were crafted by local cabinetmakers including Bruce Berman.

“The house was very cold; brown walls and lots of aluminum, steel and glass furniture, those vertical aluminum blinds. I made an effort to warm it up with as much wood as possible. We mixed antiques, some of which we had inherited, with contemporary furnishings. I wanted it to look like we had always lived here, not like it was brand new.”

Perhaps the biggest change came from the couple’s love of art and collecting. The great expanses of wall are covered with important paintings, sculptures surprise around every corner, and collections abound. Colorful French Robj decanters from the 1920s, Czechoslovakian tobacco jars, scrimshaw, Carlton Walking Ware, old books, crafts, contemporary art glass—much of it from Morgan Gallery on Ellsworth—and decorative objects have brought the house to life. But the most astounding collection warrants its very own room. The husband is one of the foremost collectors of Pallisy ware, glazed 19th-century French pottery covered with aquatic landscapes inspired by the work of 16th-century ceramicist Bernard Palissy.

“I saw one at a friend’s house,” he says. “Weird things appeal to me. I didn’t know what it was, so I started looking for it. It was very difficult to find. That’s part of the challenge, the chase and the hunt.”

The husband has written three books on the subject and has been amassing his collection for 19 years. Like everything else in the home, it testifies to a passion for beauty and design, the thread that links the present to the past. Like Mrs. Hunt’s formal rose garden behind the house, the owners are as much custodians of the home’s history as they are creators of a new work of art.