A life well traveled, well collected, well lived. The evidence fills the spectacular city residence of a prominent couple who recently moved into an historic building. Their apartment occupies most of an upper floor, with views on three sides that provide a breathtaking panorama. 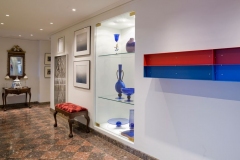 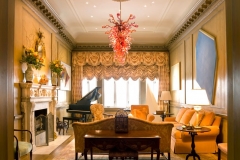 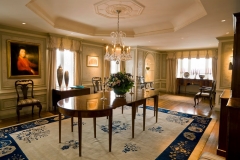 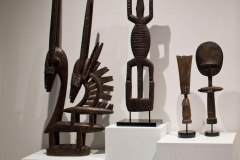 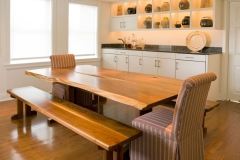 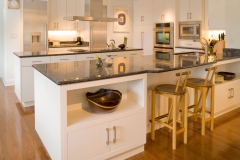 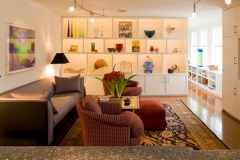 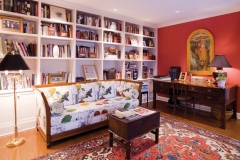 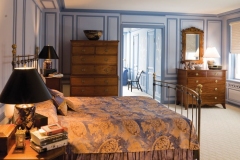 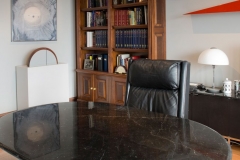 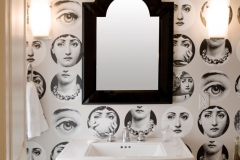 That is, of course, if one can look away from the dazzling art collection.

Museum-quality pieces, most of them contemporary, have found glorious resting spots throughout the renovated space. Many benefit from pure white walls and a complex network of recessed lighting, or sit on substantial glass shelves. The art pops even more against the French blue walls of the master bedroom, the deep raspberry in the den, and especially in the living room, which is nothing less than jaw-dropping.

A previous owner purchased the room above it and had the ceiling raised to double height. The antique pine paneling came from an English country house, and the carved marble mantel is Georgian. It’s a stately, traditional room—except for the magnificent Dale Chihuly chandelier that glows at its center. Large-scale pieces by Kenneth Noland, Dorothea Rockburne and Pat Steir adorn the walls, whose art-friendly height and ability to stand strong in the face of such important work was a major selling point. Yet the room is wonderfully livable, thanks to the warmth of many antiques that sit on an old Agra rug. Its color set the tone for the other soft furnishings in the room, which were chosen in collaboration with designer Suzanne Friday of Friday and Genter.

“We wanted to show the art—that was the key to the whole place,” the lady of the house says. “Contemporary art pieces are huge. When I saw the two-story living room, that had a lot to do with our decision to move here. It had such potential. The bones of the place were good, though we had to do a lot more than we thought. We had to jackhammer the floors, put new floors in everywhere, replace the windows, plumbing, heating.”

The owner has an extensive background in art, architecture and design, and she guided the 10-month project with assurance and determination. She knew what was in her collection and where each piece would go. Indeed, a month after moving in, every room was complete to the last detail. Design Alliance was brought in to draw plans for some of the display areas and structural changes that the owner had already determined. Her vision included demolishing three small kitchens to make room for one large, modern kitchen and a breakfast room. A portion of the servants’ quarters was borrowed to create a family room that boasts a substantial display of glass art by Kathleen Mulcahy, David Levi, Masami Koda, Richard Marquis, William Morris, Ann Robinson and Rolf Powell. The remaining space was converted into guest quarters and wine storage, with antique racks that were found in the basement of the Rolling Rock Club.

The rooms flow from an art-filled entrance hall that leads to bedrooms on one side, connected by a narrow hall that houses original photographs by Alfred Stieglitz, Edward Steichen, Mathew Brady, Paul Strand, Luke Swank and more. In the other direction is the husband’s office with original Florence Knoll furniture and art by James Turrell and John McCracken. A massive formal dining room, the largest room in the house, comes next. An antique Chinese carpet and family heirlooms are mixed with more glass art, tucked into niches. Three engravings by the Italian Old Master known as Il Guercino and a drawing attributed to A. Caracci adorn the muted walls. The door near the fireplace leads to the breakfast room, which can double as a serving area. A walnut table commissioned from Tadao Arimoto is the centerpiece, with a lighted wall of ceramics by Warren MacKenzie and Bill Strickland as the other focal point in the room.

“We agreed that we both must care deeply about each piece we buy or we don’t buy it,” the owner says. “We’ve been married for 20 years this September. We started with photography and went on from there.”

Rarer than a marriage of minds is a marriage of taste. Now happily ensconced in their new home, the couple can enjoy their collection and the back-stories that accompany every piece. For, as every collector knows, part of the thrill is in the chase.