A River Runs By It

The family room of Kitty Hillman’s apartment combines traditional comfort with stunning urban views. The painting is by Patrick Ruane.

This is the story of a thoroughly modern dilemma that was solved by a building erected in 1901 along the banks of the Allegheny River. More than a full century later, the Armstrong Cork Factory in the Strip District is bustling with life and assorted pursuits of happiness. 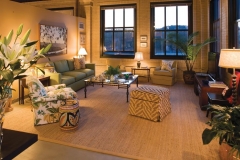 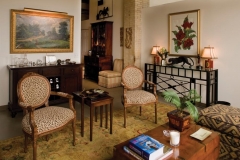 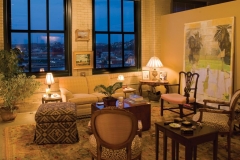 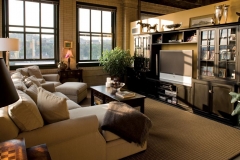 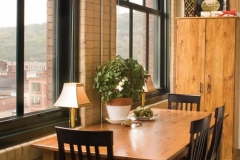 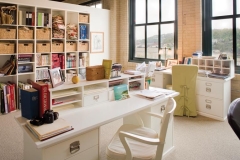 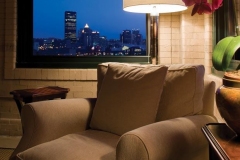 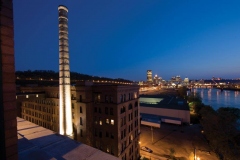 The massive structure designed by Frederick John Osterling, Pittsburgh’s most famous architect at the turn of the century, had fallen into decay after it was abandoned in 1974. But a major historic restoration begun in 2001 turned the derelict-infested ruins into an ultra-cool city dwelling known simply as The Cork Factory.

It took four years to create the 297 lofts that combine original industrial elements with breathtaking river and city views. The ceilings reach 14 feet, the windows are 8-feet tall and the walls are finished to about 9 feet, after which the old brick, cement and infrastructure becomes visible. Various floor plans are available for the units, all of which are rentals. The three basic structures that formed the factory now house a workout center and commons area in addition to the lofts, while a pool overlooks the river beside the landmark smokestack. But it is the tower that offers the finest views, and that’s what first attracted Richard Burkland.

“I stumbled into it one idle afternoon, three days after they started renting it,” he says. “I came here by accident.”

Burkland, who is in the energy business, has a farm near Uniontown but was spending more time in the city. He was quick to sign on for the three-bedroom tower apartment he now occupies, waiting nearly 18 months for it to be ready. “I thought it might be fun to live Downtown for awhile,” he says. “I liked the loft concept and really, the adventure of moving there.”

Kitty Hillman received an unexpected offer for her Squirrel Hill home, which was not on the market but had become more than she needed once her two sons went away to school. Her relationship with Richard, who has two sons the same age also at school, had crossed over the serious line. Both wanted a place that could be home to their boys, yet neither was interested in cohabitating. Their solution was novel. They rented an entire floor in the tower, which contains three apartments. Each has a three-bedroom end unit, and they share the two-bedroom middle unit, which contains their offices and a large central space with a pool table the boys use for entertaining friends.

The units open onto a private hall, which makes for easy coming-and-going among them. It’s also a great space for parties such as the recent one the couple hosted for the Carnegie Museum of Art Associates (which Kitty chairs) to celebrate the Carnegie International Ambassadors.

Making the pre-painted and carpeted lofts into a home was a challenge easily met — Kitty is an interior designer with her own firm, KH Hillman Interiors. She had all the furnishings from her large, formal home, which set a traditional tone for her new space. But since moving into the Cork Factory a year ago, she’s purchased more contemporary items including paintings by local artists Barry Shields, James Maszle and Patrick Ruane. She is an inveterate collector of antiques, art and objects, and the rooms boast an eclectic assortment of wares picked up during travels to Paris, Buenos Aires, Venice, Dubrovnik, Haiti, Istanbul, Santorini and Jamaica, where her family has a home. They vie for attention with the spectacular views from the giant windows, most of which Kitty has left uncovered.

“The river is absolutely captivating,” she says. “The sunsets, the storms, the leisure boats and barges, all the crewing. The water changes colors and current. And it’s so cool here to see the seasons change. Spring is so beautiful, but so are all the seasons.”

Also on the plus side is the location on Railroad Street (“Every Sunday night the train comes through here — we love the sound of the whistle”) near 24th Street.

“We use the city so much more,” Kitty notes. “We eat Downtown, we go to the theater much more readily. We shop there and are more inclined to enjoy cultural events because it’s all right in front of us. But we also feel that we’re a little bit on the pioneering edge here. We know things are coming, but they aren’t here yet. We’re anxiously awaiting the new restaurant and organic market that are opening across the street. You can’t run out and get a quart of milk.”

While both sets of boys had some trepidation about the move, they quickly realized the novelty of the space made it attractive to their friends, as did having separate entertaining quarters. “There’s a real social atmosphere here,” Kitty adds. Cocktail parties outside by the fire are common, as are pot luck nights and other gatherings that bring the neighbors together. Many are young professionals, but there are also families with kids, retirees and residents who are passing through, such as actor Viggo Mortensen, who lived in the Cork Factory while filming “The Road.”

“I said we don’t need all that space,” Richard remembers. “But I’m so glad we have it. That’s what makes this work. Kitty just has that designer eye, and we really enjoy it here. But beyond the space, it’s the river that’s the key, to Pittsburgh and to this place.”