A Foundation for the Future

The Benter Foundation has increasingly made a mark in Pittsburgh since it was founded 11 years ago by philanthropist Bill Benter. Dedicated to supporting “the leaders, organizations and ideas that help communities and individuals thrive,” the foundation’s primary focus has been local, with an emphasis on the arts and education. 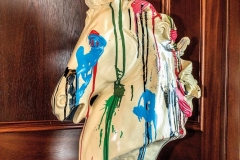 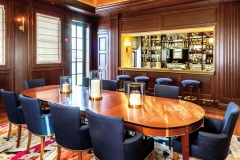 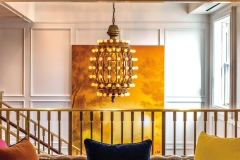 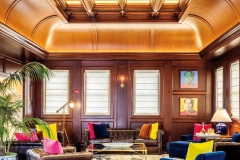 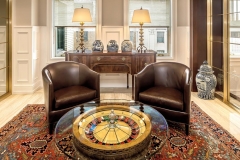 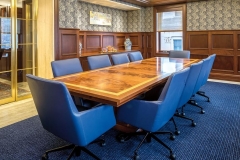 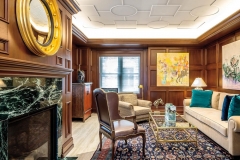 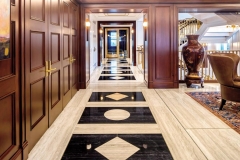 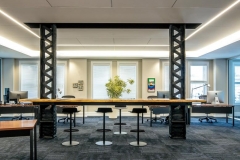 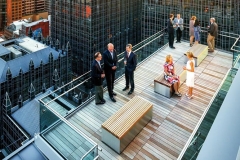 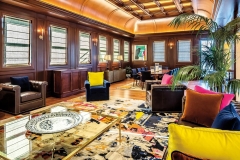 Benter’s approach is hands-on. He and his wife, Vivian, are prominent on the social scene, attending many of the events they have made possible through generous grants. So it made sense that when Benter began to look for office space Downtown several years ago, he went on the hunt to find something that resonated with him personally.

“Most of what I saw were nondescript office spaces, a certain number of rooms on the 16th floor of a big block building with sealed windows,” he remembers. “There were other, interesting buildings in the Cultural District along Liberty and Penn, but they tended to have windows in the front and back but no side windows, so the light was just terrible.”

An important factor for Benter was the ability to make the space his own, to create something that utilized the talents of fine craftsmen and reflected an aesthetic of beauty and permanence. “When you don’t need a huge amount of space you end up renting in someone else’s building, and as a renter you aren’t as incentivized to make changes,” Benter notes.

Fortunately he discovered the Benedum-Trees Building on Fourth Avenue. It was unique in many ways, starting with the character it had accumulated since it was designed by architect Thomas H. Scott in 1905. The 19-story building had windows on four sides and great views of the city, a central location and ample parking in a public lot just across the street. But the clincher was the fact that the building was a condominium. Benter bought five floors, including the top three where the foundation shares offices with his technology business.

“I have always admired this incredibly old-fashioned, historic lobby. It was like a time machine,” Benter says. “There’s a richness to the character of these old buildings. You get a special feeling going into them that you don’t get from a steel-and-glass office building.”

The challenge Benter gave his architects was to honor that character and sense of history while renovating the space to serve a variety of purposes. The Mufson Partnership from New York did the initial plans for the space until Benter had a chance meeting in the elevator with architect Rob Pfaffmann, whose firm, Pfaffmann + Associates, has had offices in Benedum Trees for 20 years.

Pfaffmann was brought on board to be the local architect, and because there were so many last-minute decisions to be made, his role expanded. Pfaffmann is known for his work with historical preservation—he did the History Center and is currently working on the August Wilson house—so the fit was a good one. With the project running over budget and Pfaffmann’s familiarity with local codes and permits clearly an advantage, he was asked by Benter to take over the job and brought in Jendoco Construction as the contractor.

“You don’t want to create an ersatz knock-off of an historic space,” says Pfaffmann. “Bill wanted to have a traditional space that felt like the inside of the Duquesne Club. When you walk through the lobby, it sets the tone for the design. You don’t want the interiors to look like they came from Las Vegas. Often people try to replicate the past in ways that look cheap. But Bill didn’t want it to look very old, either. He wanted something that did look new. Where we came together was in exploring the idea of what it means to do something authentically.”

Because the building is considered part of the Market Square Historic District, the exterior plans had to be approved by the review board. Perhaps the biggest change was the creation of a rooftop deck and the removal of the roof to raise the ceiling height on the top floor. The open space was designed for gatherings, complete with a bar and a catering kitchen tucked away in the back. A dramatic cove ceiling and coffers, along with a row of oversized windows and warm mahogany paneling, give the space gravitas. Yet there is a scale and simplicity to the lines that hints at the modern, a feeling reinforced by the colorful, nontraditional décor.

“I always see working on old buildings as inspiration for the new,” says Pfaffmann. “The way you do new windows might be inspired by the wisdom of an old window. You can take some lessons from old buildings and translate that forward. The greenest building is the one that already exists. This building was designed before artificial lighting and natural ventilation. It has quality, character and history.”

Though the top three floors were gutted—one floor down houses the foundation’s office and the 17th is home to a technology company—the new construction honored the integrity of the old while taking advantage of the progress made since. For example, instead of using marble for the floors—the weight would have made it structurally unfeasible—Pfaffmann specified thin Italian porcelain tiles that mimic marble so realistically it’s hard to tell the difference. Yet when it came to the window mullions, Benter agreed to go with slender solid brass muntins rather than chunky and far less costly commercial systems for the sake of authenticity.

Pfaffmann praises Benter for being willing to champion quality over cost during the year it took to complete the job. Some of the region’s finest craftsmen were brought in and encouraged to do their best work, from the beautiful matte brass balustrades by Waltco that line the stairways to the custom millwork throughout by Wyatt. Behind the scenes are state-of-the-art mechanicals including a music system integrated into the ceiling and an automatic LED lighting system.

“My foundation has a mission to make Pittsburgh a better place and a more livable city,” says Benter. “The foundation overwhelmingly supports Pittsburgh causes, so putting money into a building in Downtown Pittsburgh is a way to support Pittsburgh. It supports the local economy, the tradesmen, the craftsmen, a lot of the people who worked on the project. A lot of them love to be able to do top quality work, and we were eager to showcase their skill.”

Stacy Weiss of Weisshouse did the interior design, working in part from plans drawn up by Mufson in the early stages of the project. “We had to have a kind of intervention,” Benter jokes. “A lot of design was done on paper two years earlier by someone imagining what it would look like because of the lead time on furniture. It looked much too somber!”

Weisshouse supplied the furnishings, window treatments, rugs and a wealth of Asian decorative objects that reflect the years Benter lived in Hong Kong.

“It needed to break away from the men’s club look,” Weiss says. “The Asian antiques added some interest that personalized the space and gave it some history. I think the space is beautiful and what Bill wanted it to be. He really educated himself about design through the process and developed a keener eye along the way.”

That was certainly true when it came to the last stage of the project. Benter brought in art consultant Casey Droege of Casey Droege Cultural Productions to curate a collection, primarily by Pittsburgh artists. Ultimately 77 pieces were selected, filling the spaces with color and a cutting- edge assortment of works, mostly by emerging artists, that shine against the stately office settings.

“Bill was really adventurous with color and a little bit irreverent with things, which was wonderful for us,” Droege says. “We brought in a lot of artwork and he chose what he liked and as we went along he narrowed down his taste. Early on we found he responded to the brighter colors, the abstract work, and it also went well with the décor that was already there.”

As Benter sits in his office, with views directly onto PPG Plaza and Market Square and a cozy fire in the fireplace, it’s easy to understand the satisfaction he feels after such a monumental project.

“I’m greatly pleased with the results,” he says. “My floors have exceeded my expectations, and a lot of the people who worked on the project enjoyed being part of something special. I am very grateful to everyone who has been involved.”