The study mixes warm woods with an 18th-century Chippendale sofa covered in a Scalamandre damask.

Rough-hewn stone, wood and copper are traditional materials for a country house, though the only thing country about the residence designed by Roger Ferri some 20 years ago is its location. 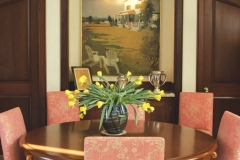 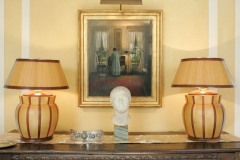 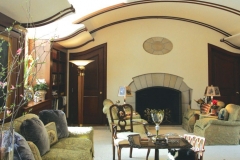 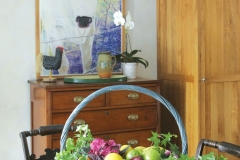 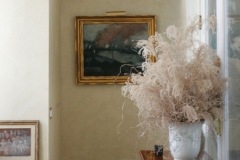 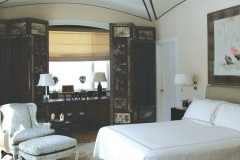 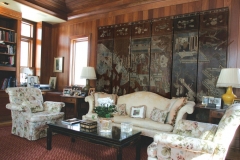 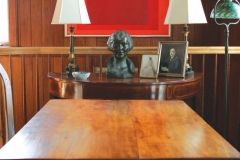 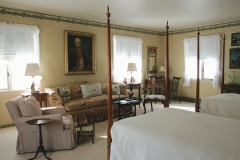 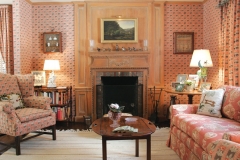 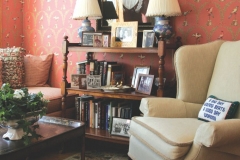 It sits by a stream tucked away from interruption in a quiet part of Western Pennsylvania, and little about it has changed since the architect’s death from AIDS in 1991. By then he was already a star whose name was often preceded by the word “visionary,” whether he was being written about in the New Yorker or in Architectural Record, where the house was featured shortly after its completion in 1987.

Part of the reason it remains so loyal to its inception is the continuity provided by designer Louis Talotta of Parke Interiors in Pittsburgh. The New York-based Ferri chose Talotta to work with him on the interior design, of which he was most particular. The architect created the torcheres, the sconces, the maple lamps and pedestal dining table, the newel post that graces the simple staircase, even the bronze andirons in the fireplace. He chose the sienna-colored plaster for the walls and designed the upholstered pieces. But it was Talotta who added the finishing touches that make the house both serene and sensuous. Working with the clients, who are also longtime friends, Talotta furnished the rooms and arranged their collections of furniture and art.

“To make the house look lived-in and charming and believable — that was my responsibility,” Talotta says. “It was very easy because I had someone to work with whom I admired. It’s very difficult for two creative people to work together, but when they’re on the same plane, it’s not difficult. It’s wonderful. It was just the best time I ever had. It was fun; it was happy. Roger was a nice person. It was his soul and his talent that were so attractive.”

Renowned for his exquisite taste, knowledge of period details and special gift for color, Talotta counts Henry and Elsie Hillman, Franny Scaife and Sam Michaels among his clients. He also has a winter clientele in Palm Beach, where he maintains a residence. Though educated at Carnegie Mellon and Traphagen School of Design (whose graduates include Norman Norell, James Galanos and Geoffrey Beene), Talotta’s 47 years of experience have been his best teacher.

“I don’t like incongruity between the interior and exterior. I don’t go in and throw everything out. I like what the clients love to be incorporated into the new environment, and that’s basically what this house is all about. It incorporates great paintings and fine furniture of many periods. The clients’ taste has always run the same way — the color is always subtle, and there’s appreciation for quality and beautiful details.”

Talotta describes the house as pre-Christian, with Assyrian-like columns that rim the façade and a vaulted living room that could be from a Babylonian palace. The scale is perfect, gentle yet imposing, spacious but intimate. The florid lines that repeat like waves and the great sweeping eaves lift the eye up, but the focal points, including the curved mahogany doors and trim, keep the room grounded. Against this background, an extraordinary collection of 17th-, 18th- and 19th-century furniture mingles with delightful accent pieces — an emerald green Waterford chandelier, children’s Chippendale chairs with needlepoint seats, gray velvet pillows against pale green and gold Fortuny fabric, an old Japanese obi. The simple monk’s cloth curtains Talotta designed are trimmed with layers of jute and linen trim from Brunschwig. And everywhere there are family mementoes that testify to a house in steady use.

As the family expanded with marriages and grandchildren, the clients decided to expand the house as well. They asked architect Maurice Saragoussi, who had been Ferri’s partner, to design an addition with new master quarters and a second-story study that overlooks a bucolic vista.

“No one knew Roger better than Maurice,” says Talotta. “They were wonderful friends and had a tremendous appreciation for each other. Maurice took over the responsibility of adding on in the same vein. It’s hard to detect who did what when.”

The 1992 addition is seamlessly integrated into the original structure, echoing Ferri’s design. What they have in common are the clients and Talotta, whose interiors recall his collaboration with Ferri. Talotta felt it was essential and ethical to be faithful to Ferri in design and attitude. At the same time, the clients’ comfortable chintz chairs made the move to their new location with nary an alteration. Respecting both points of view is what Talotta does especially well.

Nowhere is that more evident than in the two guest houses adjacent to the primary residence, both paeans to Americana. Filled with good early furniture and paintings, the little houses boast a gleeful abandon of stuff, as if in reaction to the restraint of the main house. It is here, in Louis’ House (affectionately named for the designer) and in the Guest House, that the Staffordshire sits on a shelf with pink lustreware, where toile wallpaper and matching curtains proclaim coziness and where eclectic memorabilia announces the long history of the family and its accumulation of heirlooms. “The idea with Louis’ House is to pretend that bolts of fabric came in and covered everything. That’s what they would have done in the 17th and 18th centuries. We didn’t manufacture fabric here. It was brought in from Europe by boat, put on the docks and bought by the bolt. The Guest House was recently refurbished to have more of the ambiance of Louis’ House, little and charming and quaint.”

Talotta continues to work on all three houses, updating as needed but keeping everything looking as it had. “The colors never change,” he notes. And when perfection has been achieved, nothing ever should.