The master bedroom in Betsy and Lee Deiseroth’s Fox Chapel home was formerly the kitchen of the 1870s structure. An adjoining dressing room, bath and sitting room complete the suite .

The before pictures of the house in Fox Chapel would send a chill through the heart of even the most accomplished renovator. An 1870s cottage married to a 1950s ranch created a charmless union, to say the least. 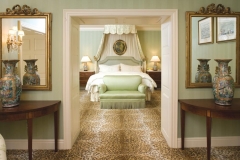 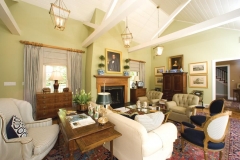 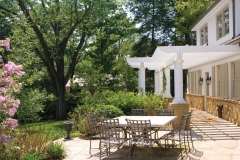 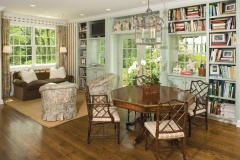 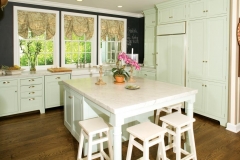 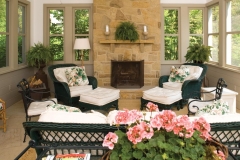 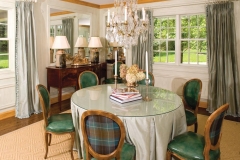 “I walked in, saw the living room and said, ‘We’ll take it,’” Betsy Deiseroth recalls with a laugh. Husband Lee, owner of The Fluted Mushroom Catering Company, was a little more reluctant. But he knew the wonders his designer wife could work as a partner with Janet Hellberg in Wellie Interiors. And he was kind enough to provide the support, both emotional and creative, for what turned into a five-year project.

Walking around the home today, it’s clear that foremost among Betsy’s attributes is vision. Using the living room with its high-beamed ceilings as a starting point, she re-oriented the house before adding a substantial new wing. The former kitchen is now the master bedroom, the former dining room is a dressing room and the loft that once over-looked the living room has been replaced by a tall tray ceiling in the gracious, new entry hall. French doors there and three more sets in the living room open onto a stone terrace and lush gardens.

The plantings are Lee’s contribution, as is the design for the kitchen. Since much of the family’s life revolves around good food and entertaining, it became the focal point of the addition. Surprisingly, the kitchen is compact and efficient rather than large and showy. Most impressive is the cooking area, which contains a professional Garland range, a cook’s sink where foods can be steamed or boiled and a well-seasoned griddle. The wall surrounding the windows is covered in chalkboard, with ever changing messages scrawled on it. Counters made from two-inch thick slabs of porous white marble — against the advice of every stone fabricator in town — bear the scars of use. “I like things with character,” says Betsy of the patina that has formed over time.

The master suite: The master bedroom in Betsy and Lee Deiseroth’s Fox Chapel home was formerly the kitchen of the 1870s structure. An adjoining dressing room, bath and sitting room complete the suite.
The Woodmode cabinetry is painted the same Palladian blue as the walls in the contiguous living portion, which contains comfortable seating, shelves for cookbooks, the Deiseroth’s collection of white Staffordshire and a casual dining table. In the summer, meals are served in the large, screened porch that adjoins the kitchen (a stone fireplace stretches its use into three seasons) or outside on the terrace. In the winter, the family moves into the formal dining room, where mirror inserts in the paneling reflect the soft sea green tones of the silk fabrics and faux bois walls. The common areas that connect the rooms are covered with a brown and white striped paper, especially attractive in the butler’s pantry.

“I wanted it to be relaxed, an English country cottage,” says Betsy. “It’s an easy house to live in. I don’t think anything is too fussy. It’s casual and comfortable.”

Much of that effect comes from the mix of fabrics and furnishings. A simple black and white mattress ticking is used for the living room curtains and chairs, while a wool tartan backs the green leather seats in the dining room. The hall is covered in warm burlap wall covering, while the dressing room features a pale green hand-painted Chinoiserie silk. Leopard-print carpeting in the master quarters is juxtaposed with more green silk fabric. Toiles abound, from a green Lee Jofa paper in the powder room to the faded covers in the kitchen seating area. Old framed prints, over-sized lanterns, the rich woods of antique furniture and the natural textures of sisal and wicker give authenticity to the interiors, but the stage is set from the outside. What had been a bad marriage of clapboard and stucco is now a stone-trimmed charmer, the prettiest house on a street lined with them.