Thrifty Tom and His Peanut Butter

The 52-ounce can of Planter’s Peanuts came from Sam’s Club. Because they’re the best, really. Extra Large Virginia Peanuts. You’ll never find a bad one in the bunch.

And the food processor? Well, yeah, originally it rolled off some assembly line at GE with an outrageous price tag, but here’s the secret: buy them at the thrift store. You can usually find one on the shelf for about $7 to $10 bucks. All it needs is a good washing.

Tom’s favorite thrift is the Red, White, and Blue in Bellevue, where he grew up. They tend to have the best selection. Because honestly, it’s stupid to buy a food processor brand new. The motors in those things just burn up with time. But in order to make the peanut butter, you’ve got to have a good machine.

This one sounds a lot louder than it should because it lost one of its feet. One of those little rubber things. Rolled off somewhere, he doesn’t know where or when. To stabilize it, he took off the remaining three.

Years ago, Tom was flipping through the channels when he saw Alton Brown’s “Good Eats” on the Food Network. Which, by the way, is a far cry from that “Iron Chef” crap. But anyway, during the episode that Tom stumbled on, Alton was making peanut butter. That looks easy, Tom thought. 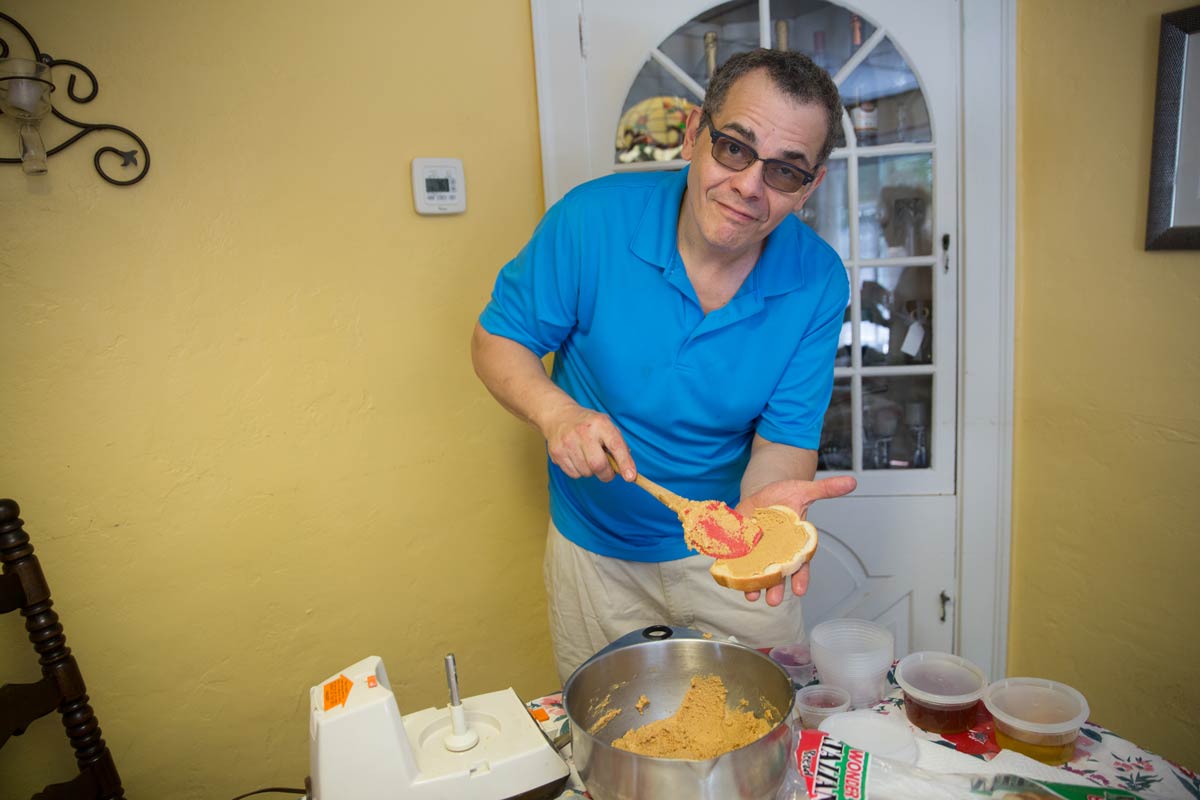 So, he tried making some himself. Just because. Although the fact that he’s a cook probably didn’t hurt. And over the years, it really hasn’t been necessary to write down the recipe because, well, Tom hates recipes. Too constraining. “Recipes are just ideas, that’s all.” Which is why he has been playing around with it all this time instead of trying to stick to some recipe, enjoying his efforts spread over thick slices of 7-grain bread, the kind with the oatmeal stuff hanging off of it that he’ll top with fresh strawberries, blueberries, or even some mulberries that grow wild near his home on Observatory Hill.

“It’s so much better than jelly. It’s out of this world,” he says. “Like a heavenly experience.”

The oil he uses is second-pressed olive oil. He tried extra virgin once, but it didn’t taste right. Then he experimented with peanut oil, but thought, What’s the point? This is 99% peanuts anyway. So, yeah, olive oil. And honey. Just a regular type of honey, though. Nothing expensive. A good grade, but not organic.

He also tried some gourmet peanuts. But nothing was as good as the Planter’s. Tom will get about four batches out of that can, once he adds 3 ½ ounces each of honey and olive oil that get measured into little plastic containers; the kind your salad dressing usually comes in with your takeout order.

“If you put too much in,” he says, the GE growling itself into a fit—grawrrrr grawrrrr grawrrr—as he adds more oil for consistency, “It’ll slow the process down.”

The process is all about patience. Not trying to get it done too fast. If the GE starts to smoke, he’ll just turn it off. Head down to the Red, White, and Blue, and find another one for $7 to $10 bucks.

“Okay,” he says, adding in some more honey, which drips onto the floral vinyl tablecloth covering his dining room table, “this batch… I might have put a little too much in. See the difference in color? This will be sweeter and a little more chunky.”

He normally makes it smooth, but a little bit of chunk isn’t bad. No one complains when they devour the contents of the 12-ounce plastic containers he gives them.

The motor continues grawrrrr grawrrrr grawrrr-ing for about three more minutes before he pops the plastic lid off the GE, using a wooden spatula to transfer the peanut butter into a stainless-steel bowl. Each batch comes out slightly different in consistency and flavor, but it doesn’t matter, see. When you combine it all together, everything works out.