↓ Skip to Main Content
Search
Home › Article › On the Water

The sun shines more often. Valleys are greening. Summer is on the horizon. And southwestern Pennsylvanians are taking to the region’s abundant streams, rivers and lakes for recreation, as they do each season in impressive numbers.

More than 66 percent of residents head to a stream, river or lake for a little recreation. And 37 percent of southwestern Pennsylvanians do so at least six times a year, a Pittsburgh Today environment survey suggests.

They are also protective of those resources. More than 37 percent rank rivers and streams at the top of their list of conservation priorities. But they’re increasingly concerned about the health of the waters they use for fun and relaxation.

Concerns over pollution of the region’s streams and rivers have soared in Allegheny County, which holds the region’s greatest population of people who use those resources. In 2018, some 57 percent of residents saw stream and river pollution as a problem in the region. In 2011, only 37 percent had such concerns, according to quality of life surveys done by Pittsburgh Today and the University of Pittsburgh in those years. 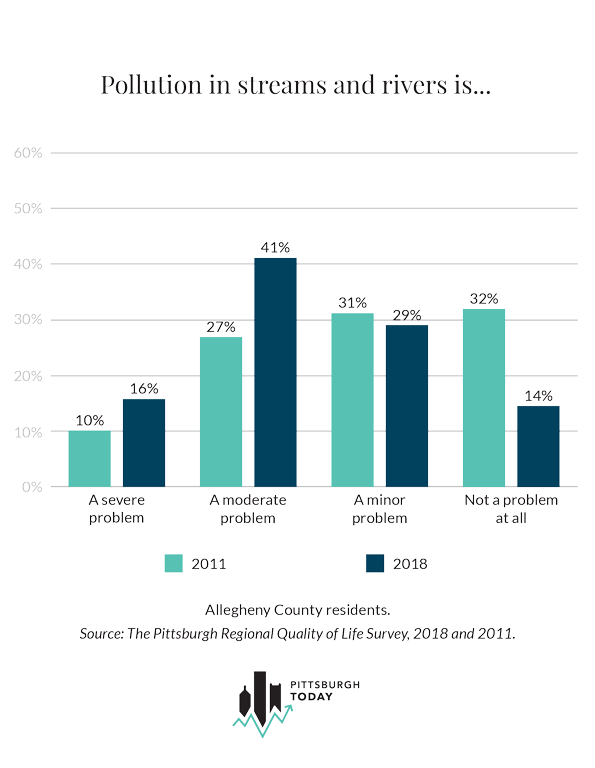 They are not without reasons to be concerned. The region’s legacy of industry and mining has had an impact of the waterways. Thousands of miles of rivers and streams in the region and state fail to meet federal water quality standards for reasons ranging from acid mine drainage and urban runoff to industrial and wastewater effluent.

The most likely to express concern about stream and river health are residents with the lowest incomes and residents who are between the ages of 18 and 45. Generally, the greater their income, the less likely residents are to see a problem. And concern tends to wane with age. Still, at least half of every age, income and education group expresses concern about the health of the waters they seek for recreation when the weather warms and the days grow long.

Pittsburgh Today and the University of Pittsburgh University Center Survey for Social and Urban Research conducted the Pittsburgh Regional Quality of Life in June 2018. 1,881 Allegheny County residents drawn from the UCSUR Research Registry completed the online survey. Data were adjusted to make the survey sample representative of the demographic characteristics of the county. The complete set of data tables are available at pittsburghquarterly.com/quality-of-life-2018.