How education colors views and lives
by Jeffery Fraser

Question: Who in Allegheny County is more likely to own the home they live in—residents with a college degree, those with some college or other post-secondary schooling, or those who never took their formal education beyond high school?

It’s not the person with a college degree. Some 72 percent of residents with no more than a high school degree own a home, while ownership rates among those with bachelor’s degrees, master’s degrees and Ph.D.s are 10–13 points lower, responses to the Pittsburgh Regional Quality of Life Survey suggest.

But residents with a college degree are more likely to never struggle to pay their monthly bills and they generally have a brighter view of the quality of life southwestern Pennsylvania offers.

Education is not a benign influence on people’s views, circumstances and outlooks, the survey makes clear. In some cases, the differences are striking. Here are some examples.

Life in the region

People with no more than a high school diploma tend to be longtime residents of the region. A whopping 9 in 10 have been residents for at least two decades. Only about 6 in 10 residents with a master’s degree or higher have lived here that long.

But that doesn’t mean the least educated are strong advocates of the region, according to the survey by Pittsburgh Today and the University of Pittsburgh University Center for Social and Urban Research. People tend to give the quality of life in the region higher marks as the level of their education rises. More than 79 percent with at least a master’s degree rate the quality of life as excellent or very good, a view shared by only half of the county’s least-educated residents.

But that’s not only concern. Safety is a key consideration for the least educated parents when choosing a school. More than 63 percent rank it as a top factor compared to only 30 percent of the most highly educated parents.

The influence of education is also seen in measures of health. Adults with only a high school degree and those with some college or post-secondary schooling are 5–6 times more likely to report only fair or poor health adults with a master’s or higher degree. They’re also more than twice as likely to be smokers.

The least educated residents are also the most burdened by housing costs—nearly half of adults with a high school degree or less say their mortgage or rent consumes more than 30 percent of their income. That’s not to say better educated residents escape the pinch: Nearly 40 percent of adults in the county who have a bachelor’s degree also spend 30 percent or more of their income on housing. 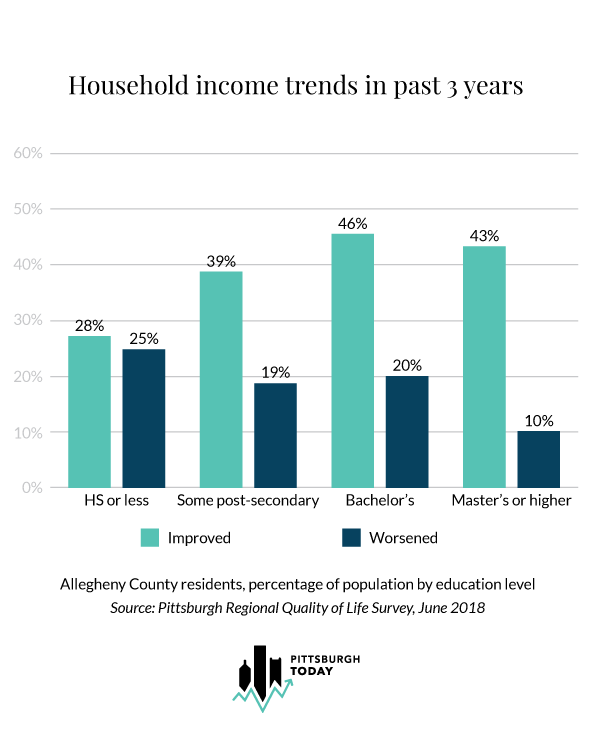 Whether it is their personal finances, health or children’s education, the survey suggests county residents with the least formal education tend to do less well. They’re even less likely than their better-educated neighbors to visit a park, or to treat themselves to a play, concert or movie.

But a shift in views and circumstances could be coming. The educational landscape is changing. The highest rates of retirees and seniors are found among county residents with the least formal education. Some 94 percent of the region’s population has at least a high school degree, one of the highest rates in the nation, according to U.S. Census Bureau data. And while the rate of adults with a bachelor’s degree or higher is less impressive, it is rising.

Pittsburgh Today and the University of Pittsburgh University Center Survey for Social and Urban Research (UCSUR) conducted the Pittsburgh Regional Quality of Life in June 2018. 1,881 Allegheny County residents drawn from the UCSUR Research Registry completed the online survey. Data were adjusted to make the survey sample representative of the demographic characteristics of the county. The complete set of data tables are available at pittsburghquarterly.com/quality-of-life-2018.