In southwestern Pennsylvania, where population has steadily been shrinking, the people least likely to see a future in the region include those under the age of 30, African Americans and residents with higher levels of education, a regional survey suggests.

More than 8 in 10 Allegheny County residents overall plan on being in the region five years from now. But that’s driven by the high number of older, white residents who reside in the region’s most populous county, particularly seniors, 95 percent of whom, not surprising, don’t expect to be moving out.

Youth on the move

It’s a different story for 18–29-year-old residents, an age group southwestern Pennsylvania covets for their youthful potential to add children to a relatively aged regional population. Some 54 percent of young adults expect to be gone within five years—an anticipated exodus that’s three times greater than any other age group, according to a survey done by Pittsburgh Today and the University Center for Social and Urban research at the University of Pittsburgh.

Such a percentage is not surprising in and of itself. Young adults are the most mobile demographic group in the region and nation. And they most often move in pursuit of job and educational opportunities. That holds true in Allegheny County, where jobs and education are what 87 percent of its 18–29-year-old residents and 82 percent of residents aged 30–44 years are what brought them to southwestern Pennsylvania.

The attraction of education and jobs is as equally strong among African Americans as it is among white residents. But blacks are three times more likely to give family ties as the primary reason for living in the county. They are also much less satisfied than other races with the quality of life they find.

Nearly 74 percent of white residents described their quality of life as excellent or good, while only 39 percent of African Americans feel the same way. And 8 in 10 African Americans feel race relations is a problem in their neighborhood, at least to some degree, compared to 6 in 10 residents of other races. It’s unclear how strongly such factors influence their desire to stay. But 1 in 4 black residents don’t expect to be living in the region five years down the road, making them less likely to stay around than residents of any other race. 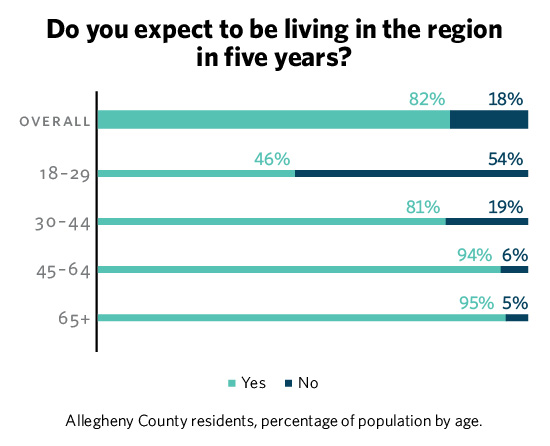 The suburbs are where the most firmly rooted residents are found. More than 89 percent of people in the county’s suburbs don’t anticipate leaving in the foreseeable future. By comparison, 7 in 10 city residents plan to remain for at least five more years.

The level of their education also tends to influence whether people are thinking about staying or leaving southwestern Pennsylvania, the survey suggests. The most likely to stay are those with the least education. Only 8 percent of residents with a high school diploma or less expect to leave. The likelihood of leaving is almost three times greater among those with a bachelor’s degree.

Pittsburgh Today and the University of Pittsburgh University Center Survey for Social and Urban Research conducted the Pittsburgh Regional Quality of Life in June 2018. 1,881 Allegheny County residents drawn from the UCSUR Research Registry completed the online survey. Data were adjusted to make the survey sample representative of the demographic characteristics of the county. The complete set of data tables are available at https://pittsburghquarterly.com/articles/quality-of-life-survey-2018/