↓ Skip to Main Content
Search
Home › Article › What Lies Beneath: The Frick Gets Undressed

What Lies Beneath: The Frick Gets Undressed

It’s the first article of clothing you put on and the last one you take off. It comes in all shapes and sizes, colors and textures, ranging from exceedingly comfortable to helplessly imprisoned. It can be sporty, sultry, dull or disturbing, and is quite literally the foundation of the outfit we build onto ourselves. And while brands go to painstaking lengths to get perfectly sculpted models donning their designs in front of you, we agonize over the single garment only you and a mirror will ever regularly see. 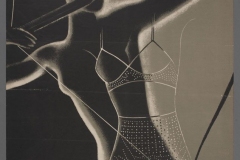 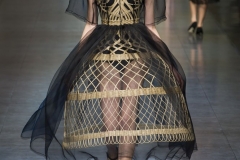 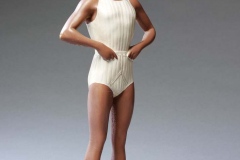 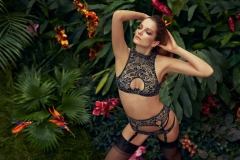 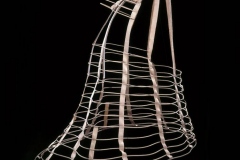 So then, why are we all so hush-hush about underwear? Why is such a common denominator inextricably linking us together only ever discussed in whispers with the likes of Lord Voldemort? Maybe it’s because it’s our last layer of defense from the elements and wandering eyes, or its association with more provocative imagery than, say, a baggy sweater.

The Frick Pittsburgh will address some of these underlying questions when it hosts an exhibition that attempts to peel back those layers of apprehension to let the imagination rummage through the dresser drawers of our predecessors. “Undressed: A History of Fashion in Underwear” explores the evolution of the undergarment over the last few centuries. Drawn from the already successful exhibition at London’s Victoria and Albert Museum, the collection pieces together a complex history and allows a glimpse through the looking glass of what has been considered desirable along the way.

“In a way, the history of underwear, the history of fashion, the history of taste, it’s all part of a story we’re trying to tell here—it’s a good fit,” says Robin Nicholson, executive director at The Frick. With over 25,000 patrons visiting during the “Killer Heels” nearly 3-month stay last summer, Nicholson wants to build on the momentum of this slightly unconventional draw for a museum known more for its vast art collection than its sense of fashion. “It’s certainly not what you expect to see at The Frick. It’s creating this interesting, disruptive sort of tension between what people expect to see and what we’re trying to do.”

The idea’s uniqueness is not without reason; unlike typical clothing and shoe exhibits, underwear hasn’t necessarily been well documented over the years according to Nicholson. In fact, building something worthy of a full-on exhibition seems to have relied on a little bit of luck. “Maybe the museum was given a collection of dresses, and in a trunk there was a bunch of underwear that no one really gave much thought about. Gradually over the years, they’ve been able to build a collection for it.”

One of the defining themes is “shaping.” That is, how culture has influenced the idea of how one should look, and how we’ve adapted materials to fit those expectations. The exhibition’s ability to demonstrate the evolution of desirable traits is extraordinary. Leaving little to question as to its purpose, an early 20th century “Bust Extender” does just that. Similarly, a pair of 2015 “butt lifters” provides some extra pop for those seeking a more rotund posterior. Various pairs of men’s briefs attempt to shape, albeit misleadingly, what lies beneath.

And then there are the 19th century corsets, some of the stars of the Undressed exhibition. These seemingly elegant contraptions appear rather harmless and actually provided additional back support while assisting with posture. However, they could become more terrifying, as demonstrated through an X-ray of a woman wearing a taut corset, her lower ribs turned in sharply towards the spine. Getting this “hourglass waist,” meant tightening the laces in the back of the corset, forcing the rib cage inward and squeezing everything else, organs included. Mercifully, perhaps due to a shift in fashion or undeniable determinant to overall health, the popularity of “tightlacing” faded towards the beginning of the 20th century.

The exhibition is organized by theme: health & hygiene, performance, volume (silhouettes), support, hosiery, lingerie, relaxation, revelation, temptation and transformation. With over 200 pieces, the collection encompasses what living in the age of the undergarment has been all about.

One of the quirkier themes is underwear as outerwear, a notion you don’t really think twice about until realizing it’s all around you. Once confined to yoga studios, women’s leggings or “yoga pants” are now commonplace. Stroll through any park popular with joggers, and you’re bound to see performance underwear in action, such as lululemon’s “Energy” sports bra. It also can be a bit more abstract: a 2001 Jennie Baptiste photograph, “Brixton Boyz,” portrays the still very much alive trend of the extremely low set jeans to reveal a sizable portion of boxers and the iconic Calvin Klein logo on the band. Even pajamas fall into this broad category of underwear as loungewear, shown through a cleverly designed set depicting scenes from the 2011 London riots.

The U.S. run is brief—Oct. 21—Jan. 7—and exclusively in Pittsburgh.

“Much like many fabric and textile shows, we’re talking about materials that are very fragile and cannot be shown for long periods of time,” Nicholson said. “The bulk of it will go into storage when it goes back to London and may not see the light of day for several years. Many of the garments are light sensitive, and even the weight of the fabric itself on display can potentially be a challenge for these materials.

“It’s an amazing story about something that, dare I say, touches us all in some way or another. You can’t escape underwear—it’s omnipresent, and so to tell that story of how it has become a central part of fashion in the broader sense is one I think people will find truly fascinating.”

Matthew John Milligan is a freelance writer living in Aspinwall.